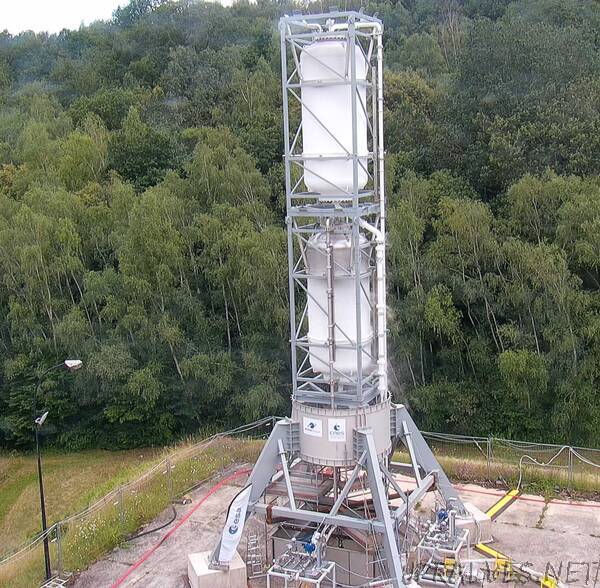 Through the Themis programme, ESA aims to assess the economic value of reusability for Europe while investing in new technologies for potential use in ESA’s future fleet of launch vehicles.

The Themis experimental approach promotes learning by hardware testing. This Agile methodology focuses on activities of greatest value and works to short timescales.

To accelerate development, technologies are being tested early in the development cycle. As part of this, prime contractor ArianeGroup recently performed six tests in Vernon, France, to validate the fluidic and electrical processes and sequences for the correct operation of two test propellant tanks. During these tests the tanks were filled then drained of cryogenic propellants.

This initial phase of the Themis project involves the preparation of the flight vehicle technologies alongside firing demonstrations of its reusable Prometheus engine. It also includes the preparation of the ground segment at the Esrange Space Center in Kiruna, Sweden, for the first hop-test flights and any associated refurbishment of the vehicle between flights.

The fluidic and electrical operations of these test cryogenic tanks and ground equipment have been validated ahead of time to de-risk hot firing tests with the Prometheus engine under integration on the same test bench.

“This is an exciting time. In the next step for Themis, we will combine two key building blocks for the future of space transportation systems in Europe. Both are developed within ESA’s Future Launchers Preparatory Programme. Themis, ESA’s flagship reusable first stage vehicle and Prometheus, its next-generation low-cost reusable engine,” said Yann Tincelin, Space Transportation Systems Project Engineer at ESA.

Prometheus is an ultra-low-cost engine built extensively through additive layer manufacturing. This has reduced the estimated cost of production by a factor of ten compared to Ariane 5’s core stage Vulcain engine. It features variable thrust and multiple ignitions and is therefore suitable for core and upper rocket stages.

The fuel used for Prometheus is liquid oxygen–methane which is highly efficient, allows standardisation and operational simplicity. Methane propellant is also widely available and easy to handle which will minimise ground operations before and after flight.

Prometheus technologies are likely to be incorporated in improvements made to rocket engines currently in operation.

In parallel to the ongoing activities for ground hot firing tests, Themis flight demonstrators are also under preparation. A European ecosystem of industry partners is forging ahead to develop and manufacture components.

Flight version steel cryogenic tanks are being manufactured. Low-cost optimised thrust vector actuation systems for Prometheus are being designed. The landing legs system has entered its final design stage before manufacture. All these enabling building blocks will come together for integration on the Themis flight demonstrator for low-altitude hop-tests in Kiruna, Sweden.

Meanwhile, the final design of ‘Launch complex 3’ at Kiruna Esrange Space Center has been reviewed by the Swedish Space Center and ArianeGroup, to prepare for the first Themis hop-tests in Sweden in 2023.

This incremental progress is built on early evaluation at each intermediate step with focus first on technical de-risking of Prometheus integration into a fully operational stage, then on flights increasingly representative of operational launch vehicles.

The final steps will be flights from Europe’s Spaceport in French Guiana in 2025 to demonstrate ascent to high altitude, reentry, landing, refurbishment and reuse, with an integrated Themis demonstrator equipped with three Prometheus engines and all the required subsystems for enabling stage recovery.”