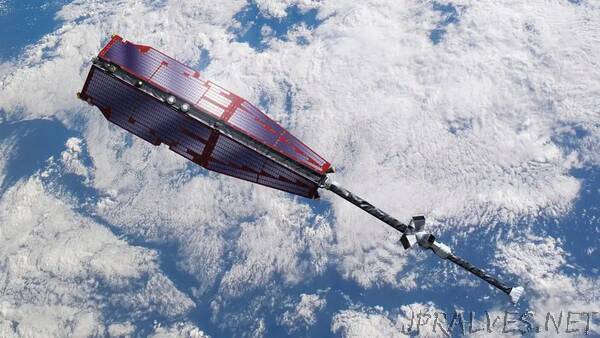 “The pressure is on at ESA’s mission control. An ESA satellite dodges out of the way of a mystery piece of space junk spotted just hours before a potential collision.

Now a crucial step in the spacecraft’s ongoing journey to safer skies has to be quickly rescheduled, as violent solar activity related to the ramping up of the solar cycle warps Earth’s atmosphere and threatens to drag it down out of orbit…

In-depth
A swarm? Of bugs?

Not quite – Swarm is ESA’s mission to unravel the mysteries of Earth’s magnetic field. It’s made up of three satellites, A, B and C – affectionately known as Alpha, Bravo and Charlie.

A small piece of human-made rubbish circling our planet – known as space debris – was detected hurtling towards Alpha at 16:00 CEST, on 30 June. A potential collision was predicted just eight hours later, shortly after midnight. The risk of impact was high enough that Alpha needed to get out of the way – fast.

A lot of it. Old satellites, rocket parts and small pieces of debris left over from previous collisions and messy breakups. Each little piece can cause serious damage to a satellite, larger ones can destroy a satellite and create large amount of new debris.

Was this the first time this has happened?

That day? Maybe. Ever? No way. Each one of our satellites has to perform on average two evasive manoeuvres every year – and that’s not including all the alerts we get that don’t end up needing evasive action.

Then what’s the big deal?

Carrying out evasive action – known as a ‘collision avoidance manoeuvre’ – requires a lot of planning. You have to check that you’re not moving the satellite into a new orbit that puts it at risk of other collisions and you have to calculate how to get back to your original orbit using as little fuel and losing as little science data as possible.

ESA’s Space Debris Office analyses data from the US Space Surveillance Network and raises the warning of a potential collision to ESA’s Flight Control and Flight Dynamics teams, usually more than 24 hours before the piece of debris comes closest to the satellite.

In this case, we only got eight hours’ notice.

And worse, the alert meant that the Swarm team was now suddenly racing against two clocks. Another manoeuvre was planned for just a few hours after the potential collision and had to be cancelled to give Alpha enough time to duck out of the way of the debris. That manoeuvre was also very time sensitive and had to be entirely replanned, recalculated and carried out within a day.

What was the other manoeuvre?

Alpha and Charlie were climbing to escape the wrath of the Sun. Both satellites needed to carry out 25 manoeuvres over a period of 10 weeks to reach their new higher orbits. One of Alpha’s manoeuvres was planned for just a few hours after the possible collision.

Wait, the Sun is killing satellites?

Our Sun is entering a very active part of its ‘solar cycle’ right now. This activity is increasing the density of Earth’s upper atmosphere. Satellites are running through ‘thicker’ air, slowing them down and requiring them to use up more limited onboard fuel to stay in orbit. Alpha and Charlie were moving up into a less dense part of the atmosphere where they can stay in orbit and collect science data hopefully for many more years and mission extensions!

What would have happened without this manoeuvre?

Alpha would have drifted towards Charlie and the orbits of the two satellites would have soon crossed. This would have left the overall Swarm mission ‘cross-eyed’, limiting its ability to do science until another set of manoeuvres realigned Alpha and Charlie.

Alpha is now safe from a collision with that piece of debris and has completed its climb to safer skies alongside Charlie. But there is lots of debris out there, and this shows with how little warning it can threaten a satellite.

How are your teams keeping up with all these collision alerts?

With new tech, more sustainable behaviour and by taking our space debris responsibility very seriously. We’re building new technology to track more debris, developing new computational tools that will help us plan and carry out the rapidly increasing number of evasive manoeuvres, and working on guidelines that limit the amount of new rubbish we and other satellite operators add to the problem. We’re even working on ways to grab larger pieces of debris and remove them from orbit using a ‘space claw’.”