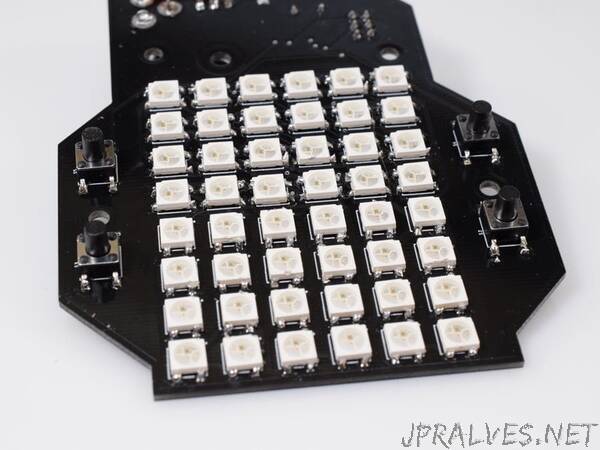 “Play Pong with a friend without the need for a screen.

I have created several projects that involve various flavors of the classic game, Pong. It’s quite simple, as it’s comprised of just two paddles and a ball that can be hit around a screen.

But I wanted to do something different; I wanted to make a game that didn’t require a screen at all — but could instead be played on discrete NeoPixel LEDs. By doing this, a large, yet low-power display could be formed and run many varieties of games.

The Components
First and foremost, there must be a way to view the game while it’s being played, which is why I went with 48 LEDs laid out in an 8 by 6 grid.

They are attached to a capacitor which smooths out the power going to the LEDs, resulting in less interference and more stability. The microcontroller I chose was the ATmega8A, which is a small, cheap MCU that has plenty of RAM and speed to run the game. It also has abundant GPIO pins for interfacing with the buttons.

Designing the PCB
I began the PCB design phase by first making a schematic, which shows the components used and how they interface with each other. The ATmega8A is connected to a 16MHz oscillator so it doesn’t have to rely on its internal 8MHz one, resulting in a drastic speed increase. The voltage regulator takes in a 9v input and knocks it down to 5v for the MCU and LEDs.”