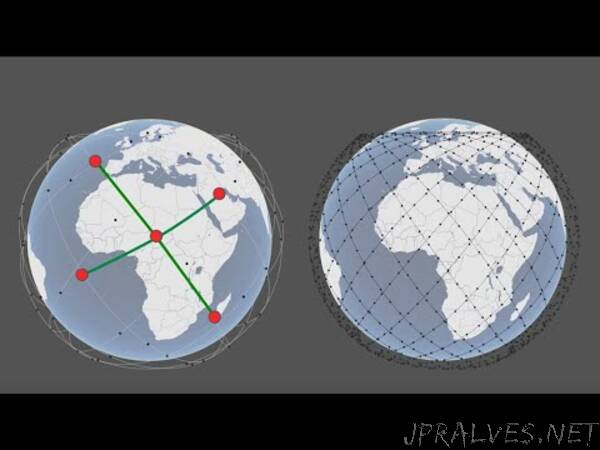 “A new generation of low-​flying satellites promises an “Internet from space”, that will be able to cover even remote regions around the world. Computer scientists at ETH Zurich are proposing a novel network design that could double the network capacity of such systems.

Satellites do not yet play a major role in the world’s Internet infrastructure. However, this may soon be set to change. Within the next decade, a new generation of satellites could lay the foundations for an “Internet from space”, believes Ankit Singla, professor at ETH Zurich’s Network Design & Architecture Lab. His team is investigating how to improve the performance of large-​scale computer networks, including the Internet.

Exploiting advances in cost-​cutting technologies in the space sector, the new satellite systems would use thousands of satellites instead of the tens of satellites used in past systems. These satellites could then be linked to each other via laser light to form a network. The coverage provided by these satellites would reach remote regions that currently have no or very limited access to the Internet, since they are not or only poorly connected to the intercontinental fibre-​optic cables that power today’s Internet.

The race for the Internet of the sky
The capabilities of the LEO satellites have triggered a new, contested “space race”, with heavyweights such as Elon Musk’s SpaceX and Jeff Bezos’ Amazon throwing their hats into the ring. These companies are developing large-​scale satellite constellations with thousands to tens of thousands of satellites. These would orbit the Earth at speeds of 27,000 km/h at a height of around 500 km (geostationary satellites: 35,768 km).

SpaceX, for example, has already launched its first 120 satellites, and is planning to offer a satellite-​based broadband Internet service from 2020. In addition to global coverage, the technology used in the “Internet from space” promises high data transfer rates without major delays in data transmission – the latency, as computer scientists call these delays, is significantly lower than that of traditional, geostationary satellites, and even that of underground fibre-​optic lines for long-​distance communication.

“If these plans succeed, it would be a huge leap forward in the world’s Internet infrastructure,” says Debopam Bhattacherjee. The doctoral candidate who is working with Singla is investigating the optimal design of networks for satellite-​based broadband Internet in order to guarantee a high-​bandwidth, delay-​free data flow. He will present his results in Florida today at ACM CoNEXT 2019, the International Conference on emerging Networking EXperiments and Technologies.

“To implement satellite-​based broadband Internet, we have to rethink virtually all aspects of the way in which the Internet is currently designed to function,” says Singla. He explains that as the satellites fly very fast and in dense swarms, more efficient approaches to network design are required for the satellite Internet. Even the design concepts used for mobile networks on high-​speed trains, drones and aircraft cannot be transferred easily to satellites.

Bhattacherjee and Singla have now developed a mathematical model that demonstrates how one might fundamentally improve the network design in space. They have tested their design approach using the example of SpaceX and Amazon, but it can be applied independently of the technology of a particular company.

Patterns ensure smooth data traffic
The design concept devised by Bhattacherjee and Singla is based entirely on the high temporal dynamics of the low-​Earth orbit satellites. The key question they first asked was: how can thousands of satellites be linked together to achieve the best possible network performance? The answer is not easy, as each satellite can have no more than four connections to other satellites.

Intuitively, one might think that the satellites always connect only to the nearest satellites. According to Bhattacherjee, however, this assumption is too restrictive. The satellites could well connect to satellites that are more distant. To maximise data transfer efficiency, it would actually be more efficient if the data used longer connections but crossed fewer nodes (satellites). After all, the act of data crossing through a node also consumes resources, thus reducing resources available for other connections.

However, reducing the number of on-​path nodes in order to increase efficiency must not compromise the length of the end-​to-end path. Otherwise, this will deteriorate latency. Further, it is important that inter-​satellite connections do not change too often, as establishing new connections can take tens of seconds during which data cannot be exchanged.

In the case of SpaceX, the new design concept increases network efficiency by 54 percent in comparison with the current approach; for Kuiper (Amazon), the efficiency increase is 45 percent. “Our approach could double the efficiency of satellite-​based Internet,” says Bhattacherjee in conclusion.”