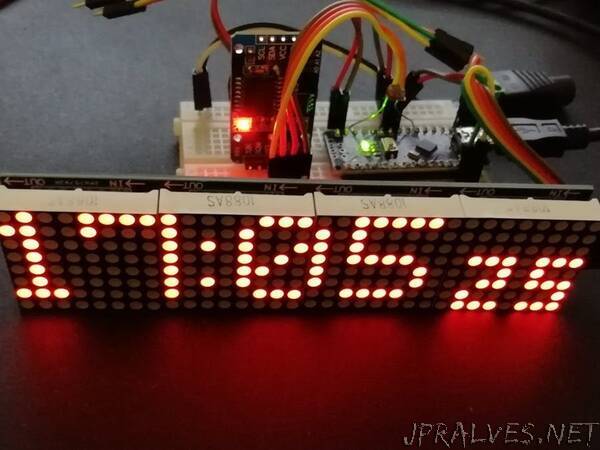 Reading a clock display in a room at several meters requires such a LED matrix display.

Having bought at a good price a 4 cell display, I looked on Hackster for available projects: there are several ones, valid for Arduino Nano. If you want to see hour, minute and seconds simultaneously: only a few projects work, because you need smaller digits than the widely available ones with 5x7 pixels per digit. An option is to use the MD_Parola library, but the code size is too large for a simple clock. The other tested option was the Max72xxPanel library, but this is too old and calls other libraries.

Finally, the project is based on the basic interface library MD_MAX722XX, included in all the others. The code is 13790 bytes (44%) and 361 bytes (17%) variables. The seconds (using my 3x5 fonts) are shown after hh:mm and the “:” are blinking! The date is shown as “dd Mon” and room temperature is shown on a separate page. The brightness is controlled by a photo-resistor, inspired by Leonardo Sposina’s “arduino-led-dot-matrix-clock” project on GitHub.

If you build a project based on this code, do not forget to press the “respect” button!”