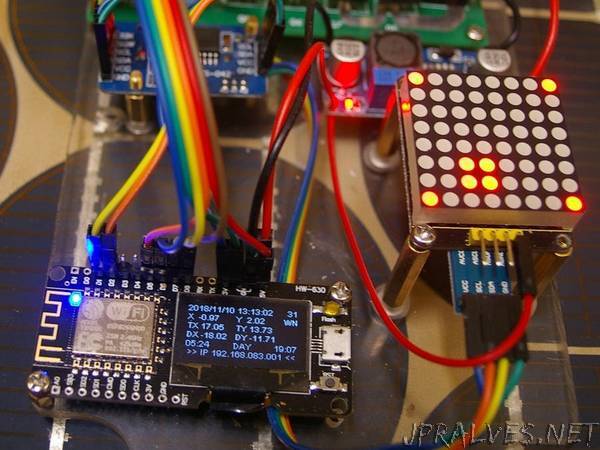 “So it’s now offical, I’m in love with the ESP8266. My god these little fellas can really go like a cut snake on hot sand. So no surprise the the third installment (revolutions) will involve a nodemcu. Now, I have been practicing between drinks so I’m doing a little better coding wise.

So built in reliable WiFi - No problems. Stand alone configuration mode and AP wifi client - No problems. PWM yeah bring it on. In short everything you need to make the solar tracker that has an NTP client and RTC.

So at the end of the second part of the story I was left with a partial success. It all worked but like it just wasn’t right. Cant put my finger on what it was but I felt it could be better. I had way better things to do but found myself porting the tracker code to the ESP8266 in the Arduino IDE. It actually took longer to work out the OLED display and wire the items up than it took to port the code.

So not to long after I started I had the smallest tracking computer I had ever made.

I’m being much more conscious of power budget this time, taking measurements at each step rather than at the end. I can also put this CPU to sleep if I wish, however not much point if I have enough power or if I need to keep it warm in winter. I’m being mindful that it needs to fit in my 7 AH power budget but this is at 24 V this time. So at present there is still lots of wiggle room.

I have gone for NTP over RTC for the time source. I loved the GPS but overkill and power hungry. The NTP code works great on the ESP8266, one of the most reliable bits, a warm thanks to the person who wrote that example :)

The user interface is much the same as the mega tracker but now has indicators for RTC battery. This interface can operate totally independently of any web services or infrastructure making it ideal for remote installation.”