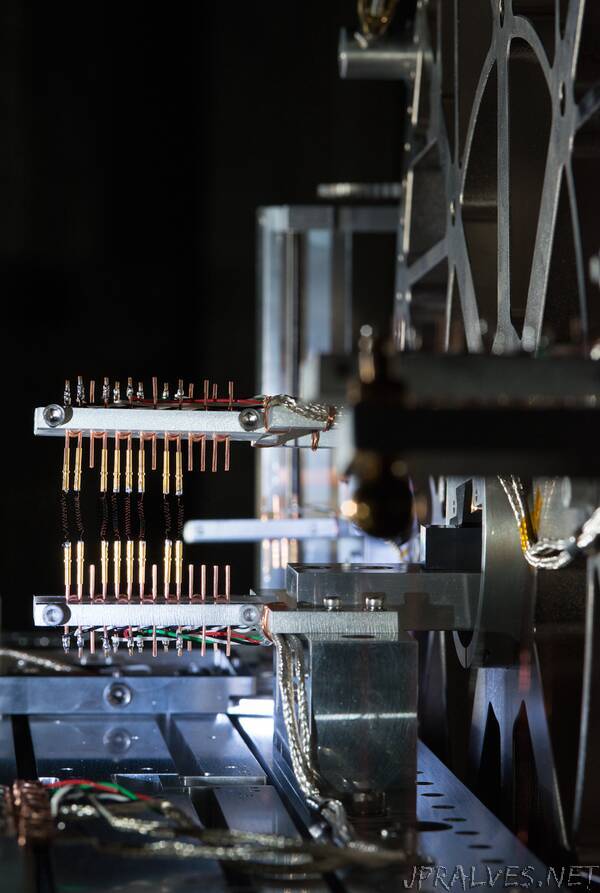 “For the first time, the NIST-4 Kibble balance directly incorporates a quantum standard for electrical resistance.

In a brightly lit subterranean lab at the National Institute of Standards and Technology (NIST) sits a room-sized electromechanical machine called the NIST-4 Kibble balance.

The instrument can already measure the mass of objects of roughly 1 kilogram, about as heavy as a quart of milk, as accurately as any device in the world. But now, NIST researchers have further improved their Kibble balance’s performance by adding to it a custom-built device that provides an exact definition of electrical resistance. The device is called the quantum Hall array resistance standard (QHARS), and it consists of a set of several smaller devices that use a quirk of quantum physics to generate extremely precise amounts of electrical resistance. The researchers describe their work in a Nature Communications paper.

The improvement should help scientists use their balances to measure masses smaller than 1 kilogram with high accuracy, something no other Kibble balance has done before.

NIST-4 measurements were used to help scientists redefine the kilogram, the fundamental unit of mass in the International System of Units (SI), in 2019. Everything that must be weighed, from market produce to the ingredients in your cold medicine, relies on this new definition of mass.

The new custom-built QHARS device is an example of a measurement standard — an object or instrument that has some predefined relationship to a physical quantity such as length or time or brightness. The standard in this case is an electrical device that uses quantum principles to generate a precise amount of electrical resistance. This generated resistance then serves as a reference during the Kibble balance’s operation.

Before this work, the NIST-4 Kibble balance relied on a different standard instrument that also provided an exact definition of electrical resistance. But that device could not be directly incorporated into the balance for technical reasons.

To get around this problem, researchers had to take another object — called an artifact — and use the standard to calibrate or assess that artifact. They then used the artifact directly with the NIST-4 Kibble balance.

The new setup eliminates the need for a resistance artifact and improves the accuracy of the balance.

“Doing the extra step of calibrating a resistor reduced the accuracy of the mass measurements,” said NIST’s Darine Haddad. “Because we’re now using a quantum standard directly instead of an artifact, we’re eliminating the calibration step entirely. That cuts down the resistance uncertainty,” meaning there is a significant improvement in resistance accuracy.

‘Current’ Dilemma
The NIST-4 Kibble balance machine works by comparing mechanical force to electromagnetic force. In a nutshell, a mass sits on the balance, and gravity pulls it down. Researchers then pump current through a coil of wire sitting in a magnetic field, and that electrical current pushes the mass upward, effectively levitating it in midair. Scientists measure the amount of current that’s needed to float the object, balancing it exactly. If you can measure the current, you can work out the object’s mass.

But for this to work, measurement scientists need to know exactly how much current flows through the coil with a high degree of accuracy. They do this by measuring two other easier-to-measure values: the voltage and the resistance.

A quantum voltage standard is already integrated into the device. But the quantum resistance standard could not be used directly because the traditional device, made of gallium arsenide (GaAs), cannot function correctly with the relatively large amounts of current needed to levitate a macro-scale object like a 50- or 100- or even 1,000-gram mass. So instead, the GaAs device was used separately to measure the resistance of a freshly calibrated object that is then inserted into NIST-4 and used in the actual measurement.

New QHARS to the Rescue
To address this problem, NIST has been designing and testing a new type of quantum resistance device: the QHARS. Instead of GaAs, this instrument is made of graphene — the single atomic layer-thick sheet of carbon atoms that has been a hot topic for many years for its promise in a variety of uses, including faster and flexible electronics.

The new graphene QHARS developed at NIST passes current through an array of 13 smaller elements in parallel. These elements work based on something called the quantum Hall effect, in which the electrical resistance is “quantized” — that is, it can have only a few possible, very specific and predictable, values. That makes the device a resistance standard that is accurate on a quantum level. (See animation.)

“We need about 700 microamperes [millionths of an ampere] flowing in the coil to levitate a 100-gram mass,” Haddad said. “In the gallium arsenide resistance standard, you can’t do that.”

Future models of the new resistance standard might see further improvements. In order to work, both the traditional GaAs device and the graphene QHARS must be cooled to just a few degrees above absolute zero and be exposed to their own high magnetic fields. Someday, a QHARS-style device could be developed to work at room temperature and zero magnetic field, which would make the whole system much more compact.

Also, unlike the old resistance standard, a next-generation QHARS could be programmable, meaning the instrument would be more versatile: Scientists could use one device to generate different amounts of resistance depending on what they needed for a particular experiment.

“A quantum resistance standard that is programmable and that works at room temperature with a low magnetic field: This is what the physicists are trying to push for,” Haddad said.