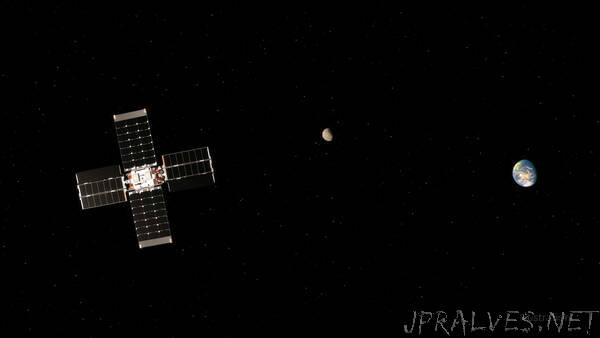 “The mission is characterizing its new “green” propulsion system and developing a modified plan for the briefcase-size satellite’s journey to the Moon.

NASA’s Lunar Flashlight mission successfully launched on Dec. 11, 2022, to begin its four-month journey to the Moon, where the small satellite, or SmallSat, will test several new technologies with a goal of looking for hidden surface ice at the lunar South Pole. While the SmallSat is largely healthy and communicating with NASA’s Deep Space Network, the mission operations team has discovered that three of its four thrusters are underperforming.

The mission team, which first observed the reduced thrust three days after launch, is working to analyze the issue and provide possible solutions. During its cruise, Lunar Flashlight’s propulsion system has operated for short-duration pulses of up to a couple seconds at a time. Based on ground testing, the team thinks that the underperformance might be caused by obstructions in the fuel lines that may be limiting the propellant flow to the thrusters.

The team plans to soon operate the thrusters for much longer durations, hoping to clear out any potential thruster fuel line obstructions while carrying out trajectory correction maneuvers that will keep the SmallSat on course to reach its planned orbit around the Moon. In case the propulsion system can’t be restored to full performance, the mission team is drawing up alternative plans to accomplish those maneuvers using the propulsion system with its current reduced-thrust capability. Lunar Flashlight will need to perform daily trajectory correction maneuvers starting in early February to reach lunar orbit about four months from now.

Swooping low over the Moon’s surface, the briefcase-size SmallSat will use a new laser reflectometer built with four near-infrared lasers to shine a light into the permanently shadowed craters at the lunar South Pole to detect surface ice. To achieve this goal with the limited amount of propellent it’s built to carry, Lunar Flashlight will employ an energy-efficient near-rectilinear halo orbit, taking it within 9 miles (15 kilometers) of the lunar South Pole and 43,000 miles (70,000 kilometers) away at its farthest point.

Only one other spacecraft has employed this type of orbit: NASA’s Cislunar Autonomous Positioning System Technology Operations and Navigation Experiment (CAPSTONE) mission, which launched in June 2022 to a different near-rectilinear halo orbit, the same one that is planned for Gateway. CAPSTONE also experienced difficulties during its journey to the Moon, and some of the NASA teams who helped the SmallSat reach its planned orbit are lending their expertise to help resolve Lunar Flashlight’s thruster issues.

Managed by NASA’s Jet Propulsion Laboratory in Southern California, Lunar Flashlight is the first interplanetary spacecraft to use a new kind of “green” propellant, called Advanced Spacecraft Energetic Non-Toxic (ASCENT), that is safer to transport and store than the commonly used propellants such as hydrazine. One of the mission’s primary goals is to demonstrate this technology for future use. The propellant was successfully tested with a previous NASA technology demonstration mission in Earth orbit.

Other systems on Lunar Flashlight are performing well, including the never-before-flown Sphinx flight computer, developed by JPL as a low-power, radiation-tolerant option for SmallSats. Also performing as designed, Lunar Flashlight’s upgraded Iris radio – which is used to communicate with the Deep Space Network – features a new precision navigation capability that future small spacecraft will use to rendezvous and land on other solar system bodies. Additional new and groundbreaking systems, such as the mission’s laser reflectometer, will be tested in the coming weeks before the mission enters lunar orbit.”