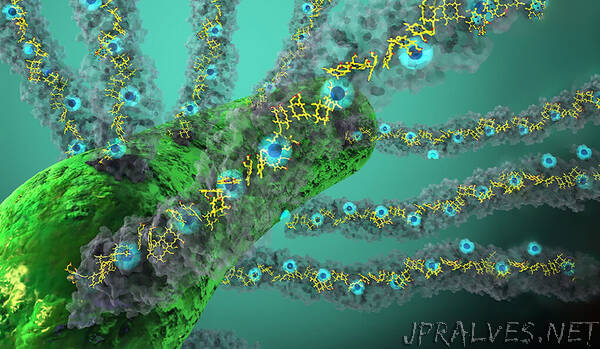 “The natural world possesses its own intrinsic electrical grid composed of a global web of tiny bacteria-generated nanowires in the soil and oceans that “breathe” by exhaling excess electrons.

In a new study, Yale University researchers discovered that light is a surprising ally in fostering this electronic activity within biofilm bacteria. Exposing bacteria-produced nanowires to light, they found, yielded up to a 100-fold increase in electrical conductivity.

The findings were published Sept. 7 in the journal Nature Communications.

The results could provide new insights as scientists pursue ways to exploit this hidden electrical current for a variety of purposes, from eliminating biohazard waste to creating new renewable fuel sources.

Almost all living things breathe oxygen to get rid of excess electrons when converting nutrients into energy. Without access to oxygen, however, soil bacteria living deep under oceans or buried underground over billions of years have developed a way to respire by “breathing minerals,” like snorkeling, through tiny protein filaments called nanowires.

When bacteria were exposed to light, the increase in electrical current surprised researchers because most of the bacteria tested exist deep in the soil, far from the reach of light. Previous studies had shown that when exposed to light nanowire-producing bacteria grew faster.

“Nobody knew how this happens,” Malvankar said.

In the new study, a Yale team led by postdoctoral researcher Jens Neu and graduate student Catharine Shipps concluded that a metal-containing protein known as cytochrome OmcS — which makes up bacterial nanowires — acts as a natural photoconductor: the nanowires greatly facilitate electron transfer when biofilms are exposed to light.

“It is a completely different form of photosynthesis,” Malvankar said. “Here, light is accelerating breathing by bacteria due to rapid electron transfer between nanowires.”

Malvankar’s lab is exploring how this insight into bacterial electrical conductivity could be used to spur growth in optoelectronics — a subfield of photonics that studies devices and systems that find and control light — and capture methane, a greenhouse gas known to be a significant contributor to global climate change.

Other authors of the paper are Matthew Guberman-Pfeffer, Cong Shen, Vishok Srikanth, Sibel Ebru Yalcin from the Malvankar Lab at Yale; Jacob Spies, Professor Gary Brudvig and Professor Victor Batista from the Yale Department of Chemistry; and Nathan Kirchhofer from Oxford Instruments.”