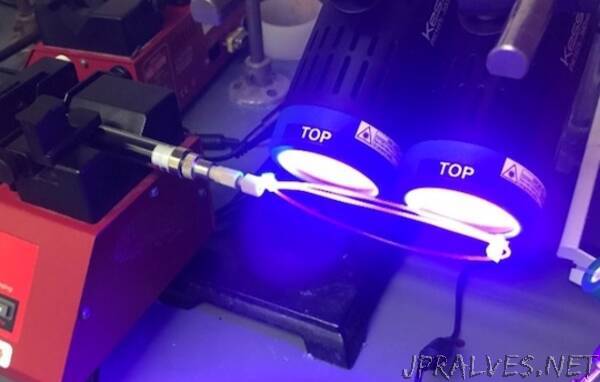 Inexpensive iron salts are a key to simplifying the manufacture of essential precursors for drugs and other chemicals, according to scientists at Rice University.

Rice synthetic chemist Julian West and co-lead authors Kang-Jie (Harry) Bian and Shih-Chieh Kao, both graduate students in his lab, report in Nature Communications that illuminating their reagents with visible light allows them to form diazides in conditions that are far more gentle than current industrial processes that usually involve high heat and corrosive acids.

Diazides are molecules with two amine groups that can be functionalized, meaning they can easily react with other molecules. Depending on how they’re constructed, they can be the basis of many useful compounds.

In a recent study, West and his group used radical ligand transfer (or “radical rebound”) to add two functional groups to a single alkene, organic molecules drawn from petrochemicals that contain at least one carbon-carbon double bond.

The technique, along with iron-mediated ligand-to-metal charge transfer, came in handy as they built similar precursors called vicinal diazides out of common feedstocks.

“It only uses two reagents, iron nitrate and TMS azide, which every synthetic lab will have,” said West, an assistant professor of chemistry whose lab strives to simplify drug manufacturing. “Basically, you mix them together in a common solvent and shine light on it. Most every pharmaceutical lab will have LED lights. So basically they’ll just pull things off the shelf.”

West said radical ligand transfer was inspired by biology, “including the enzymes in our own livers. There are enzymes in nature that transfer atoms or fragments of molecules to a radical to make a new bond that can help build up bigger molecules. We were excited to explore the potential of that one step in the last study.

“In this project, now that we’ve established how that works, we can start to combine it with new steps to make something different,” he said. “The funny thing is, like with everything in organic chemistry, nature appreciated a long time ago that this can be really useful.”

Both LMCT and radical ligand transfer happen, one after the other, when the reagents and solution are illuminated in ambient conditions. The lab learned to maximize the process through flow chemistry, running the solution through a looping tube and lighting just that tube.

“The reaction happens in the part where you shine the light,” West said. “That way we can process more than a single batch, and also have much more control over the amount of light it’s getting by speeding up or slowing down the flow.

“It’s dead easy to dump the salts in the flask and shine a light on it, but if you want to make a lot, or make it better, flow works really well,” he said.

“We think it will be helpful for labs that want an easy way to make this kind of product, especially if they don’t have the time to fine tune and fight with getting these other methods to work well,” West said.

The research was supported by Cancer Prevention and Research Institute of Texas (RR190025), the National Institutes of Health (GM142738) and the Welch Foundation (C-2085).”