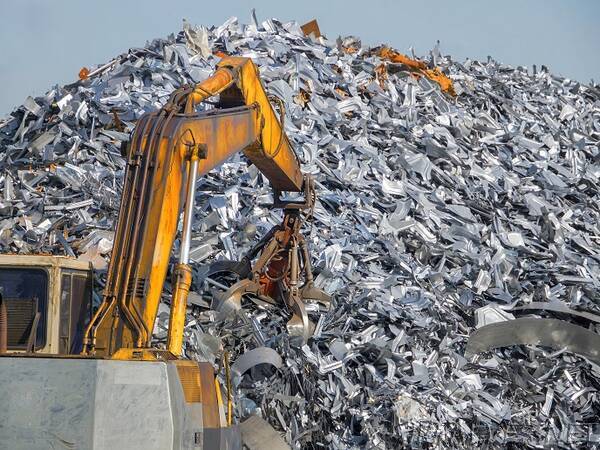 “From cars to cans, we are surrounded by the enduring silvery shine of aluminium. We asked metallurgist Casper van der Eijk what makes it worth its weight in gold.

Despite being the most abundant metal on Earth, constituting over 8 % of the Earth’s core mass, aluminium was only discovered in the 1820s, by Danish physicist Hans Christian Ørsted. This is partly explained because pure aluminium doesn’t exist in nature as it binds easily with other elements like oxygen.

Our main source of aluminium is the sedimentary rock, bauxite. As Van der Eijk explains, “It takes about four kilos of bauxite to produce one kilo of aluminium metal. After mining the bauxite ore, aluminium oxide is extracted. Then, the aluminium and oxygen are separated by an electric current passed through a molten solution of alumina and the mineral cryolite, which dissolves the oxide minerals.”

It wasn’t until towards the end of the 19th century that aluminium was produced at an industrial scale, and its properties proved invaluable. It is lightweight – about a third the weight of steel. “It is also soft and malleable, so can easily be cast or formed into many different products,” adds Van der Eijk.

It has been routinely used in packaging (in cans and for aluminium foil), consumer goods (such as phones and PCs), transportation (cars, planes, ships and trains) and power lines, being cheaper than copper and with a better conductivity to weight ratio.

And also, it doesn’t rust?
It turns out that this is a misconception.

When iron is exposed to moisture and oxygen, it becomes caked in the brown-red brittle substance we call rust. As steel is an alloy, with iron its principal ingredient, it also rusts.

While other metals corrode when exposed to oxygen or water, they don’t actually rust. Think of the thin green layer that forms on the domes of buildings made from copper, brass or bronze.

“Aluminium reacts very quickly to oxygen, creating a thin layer of aluminium oxide on its outer surface, which stops more oxygen from reaching the metal, so protecting it,” explains Van der Eijk.

This, however, doesn’t make aluminium invincible.

Contact with salt water can result in small holes, known as pits, and it will corrode if exposed to alkaline environments, but is more resilient to acid, able to withstand soft drinks with a pH less than three.

“So it’s not suitable when combined with wet concrete. When Portland cement is hydrated with water to make concrete it produces very alkaline calcium hydroxide, which can cause the aluminium to crack,” Van der Eijk notes.

A bright shiny future?
Aluminium can be infinitely recycled with limited materials loss. Indeed, according to Recycling World: “This property of infinite recyclability has led to a situation where today around 75 % of the almost one billion tonnes of aluminium ever produced is still in productive use.”

It can also be used to replace less sustainable building materials when they reach the end of their life cycles, with Recycling World adding that “It requires up to 95 % less energy to recycle aluminium than to produce primary metal and thereby avoids corresponding emissions, including greenhouse gases.”

Additionally, it is an ideal material for building the infrastructure, such as solar panels and wind turbines, of the green energy transition. It also remains attractive for transport, as reduced vehicle weight also decreases emissions.

However, questions remain about the sustainability of its production.

“Currently, every kilogram of aluminium metal produced creates over one kilogram of red mud, which ends up as landfill. And electrolysis should be done without CO2 emissions,” remarks Van der Eijk.

Indeed, Van der Eijk’s EU-funded project ENSUREAL set out to achieve exactly this. ENSUREAL tweaked the standard Pedersen production process to accept lower grade ores, while also substituting carbon materials with hydrogen, and fossil carbon materials with biocarbon ones, all the while creating useful by-products, such as building materials.

“Aluminium has long been dubbed ‘the green metal’; while it doesn’t fully live up to this yet, I’m confident that it remains key to the circular economy,” concludes Van der Eijk.”