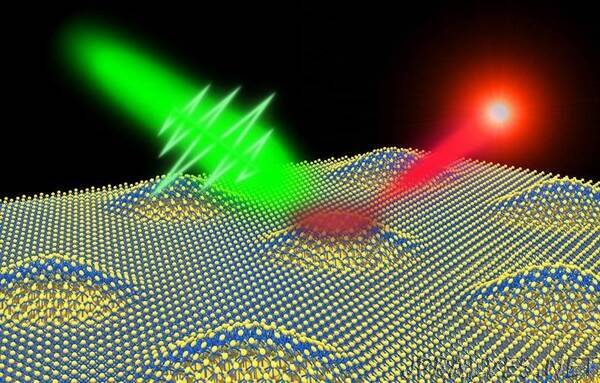 “The Science
Conventional light sources for fiber-optic telecommunications emit many photons at the same time. Photons are particles of light that move as waves. In today’s telecommunication networks, information is transmitted by modulating the properties of light waves traveling in optical fibers, similar to how radio waves are modulated in AM and FM channels. In quantum communication, however, information is encoded in the phase of a single photon—the photon’s position in the wave in which it travels. This makes it possible to connect quantum sensors in a network spanning great distances and to connect quantum computers together. Researchers recently produced single-photon sources with operating wavelengths compatible with existing fiber communication networks. They did so by placing molybdenum ditelluride semiconductor layers just atoms thick on top of an array of nano-size pillars. This is the first time that researchers have demonstrated this type of tunable light sources suited to use in telecommunications systems.

The Impact
The results of this study make it possible for the first time to integrate quantum light sources made of two-dimensional materials into existing communication networks. In addition, the two-dimensional nature of the material makes it easy to construct devices layer by layer. This could help integrate these light sources into emerging quantum computers to construct larger, modular computing systems and achieve quantum advantage for practical applications.

Summary
The ability to integrate fiber-based quantum information technology into existing optical networks would be a significant step toward applications in quantum communication. To achieve this, quantum light sources must be able to emit single photons with controllable positioning and polarization and at 1.35 and 1.55 micrometer ranges where light travels at minimum loss in existing optical fiber networks, such as telecommunications networks. This combination of features has been elusive until now, despite two decades of research efforts. Recently, two-dimensional (2D) semiconductors have emerged as a novel platform for next-generation photonics and electronics applications. Although scientists have demonstrated 2D quantum emitters operating at the visible regime, single-photon emission in the most desirable telecom bands has never been achieved in 2D systems. To solve this problem, researchers at Los Alamos National Laboratory developed a strain engineering protocol to deterministically create two-dimensional quantum light emitters with operating wavelength tunable across O and C telecommunication bands. The polarization of the emissions can be tuned with a magnetic field by harnessing the valley degree of freedom. The researchers obtained 90 percent single-photon purity and a 77 Kelvin operating temperature. These groundbreaking results open the door to exciting developments in quantum technologies.