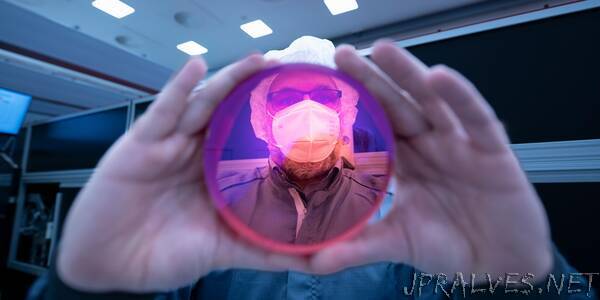 “Physicists at the Centre for Advanced Laser Applications at LMU Munich have combined two plasma-based methods of particle acceleration for electron beams.

If one particle accelerator alone is not enough to achieve the desired result, why not combine two accelerators? An international team led by physicists at the Centre for Advanced Laser Applications (CALA) at LMU Munich has implemented this idea. It combined two plasma-based acceleration methods for electrons, namely a laser-driven wakefield accelerator (LWFA) with a particle-beam-driven wakefield accelerator (PWFA). With this combination, the physicists achieve better stability and higher particle density for electron beams than with just a single plasma accelerator. The innovative concept therefore opens up new perspectives for plasma-based particle acceleration.

Plasma-based wakefield acceleration is considered a hot candidate for the next generation of particle accelerators. In such a machine, an intense driver moves through a particle mixture of ions and free electrons called plasma. The driver, which is either an intense laser pulse or a short, very intense pulse of high-energy particles, displaces the plasma electrons that get in its way. Similar to a boat on a lake, the displaced matter flows back to its initial position behind the driver. On the resulting wake behind the driver, electrons can in turn surf and reach energies in the gigaelectronvolt range within a few millimeters. Due to the enormously large acceleration fields, however, these plasma accelerators are difficult to tame.

The CALA laser physicists have now experimentally demonstrated that by combining a laser-driven and an electron-beam-driven plasma accelerator, higher stability and particle density can be achieved than is possible with a single, laser-driven accelerator stage. In this “hybrid” approach, electron bunches with a high peak current are generated in a first laser-driven wakefield accelerator. These electrons serve as a driver for the subsequent particle-driven wakefield accelerator, in which again electrons are accelerated. The stability of the newly generated electron bunch is much higher, since the second accelerator stage is much less sensitive to unavoidable fluctuations of the driver. The hybrid approach thus combines the advantages of the two complementary driver types for plasma-based accelerators.

The stability and high charge density of the generated electron bunches is a fundamental prerequisite for the generation of brilliant X-rays via various mechanisms. On the one hand, the narrow-band, low-divergence electron bunches are ideally suited for the generation of hard X-rays by Thomson-backscattering, which can be used for medical imaging. On the other hand, the high beam quality should enable challenging novel applications such as plasma-based free-electron lasers (FELs). Such FEL radiation could be used in the future to study ultrafast phenomena in solids with atomic spatial and temporal resolution.”