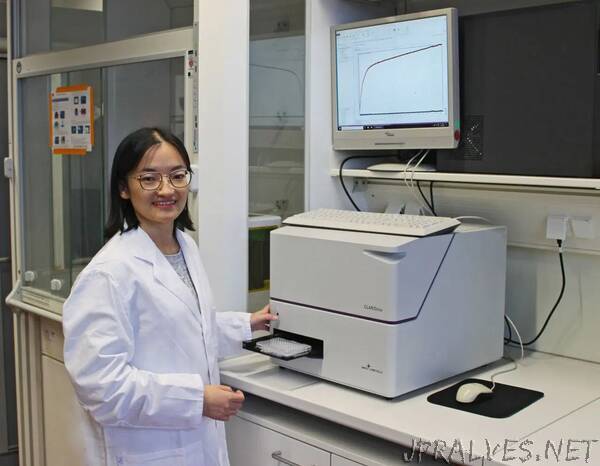 “Numerous plastics are principally biodegradable, but are only degraded very slowly in the open air, wastewater, or composting plants. Known enzymes with the ability to degrade plastics could solve this problem. To do so, however, they must be able to withstand high temperatures. An interdisciplinary team from the Collaborative Research Center “Microplastics” at the University of Bayreuth has now presented new methods in the journal “Biomacromolecules” that are a crucial prerequisite for protecting enzymes from high heat. If enzymes are thermally stable, they can be added to biodegradable plastics during production and later accelerate natural degradation.

Numerous commercially available plastics undergo natural degradation processes in the environment and are therefore considered biodegradable. These include, in particular, aliphatic polyesters such as polylactic acid (PLLA). The natural degradation of these plastics produces water and carbon dioxide molecules, which are used by bacteria to produce mineral substances. However, recent research has shown that these processes require much more time than is compatible with efficient environmental and nature protection.

In principle, natural plastic degradation in the environment could be accelerated with the help of enzymes. For example, the enzyme proteinase K is capable of attacking and breaking down PLLA molecules. This ability of certain enzymes to degrade plastics could be optimally exploited if it were possible to equip biodegradable plastics with these enzymes during their production. The enzymes would then later become active in the environment, in wastewater, or composting plants. However, precisely this attractive solution to the problem has so far been prevented by the fact that melt extrusion is used in the industrial production of aliphatic polyesters and other biodegradable plastics. This is an indispensable production step that takes place at very high temperatures of well over 100 degrees Celsius. Until now, no way has been found to protect enzymes well enough to keep them stable at high heat and thereby preserve essential functions such as the ability to degrade plastics. There was a lack of scientific methods that could be used to obtain precise data on the heat resistance of enzymes.

At this point, the interdisciplinary team of the Bayreuth Collaborative Research Center 1537 “Microplastics” has now made decisive progress. In collaboration with the Federal Institute for Materials Research and Testing (BAM), the scientists have developed quantitative methods using proteinase K as an example, which allow the thermal stability of enzymes to be determined with a previously unattained level of detail – up to a temperature of 200 degrees Celsius. “With the methods we present in our new study, it will be possible to preserve enzymes from thermal decomposition much better than before. We now have a reliable tool in hand to evaluate technical measures developed and proposed to protect enzymes in terms of their effectiveness,” says the study’s first author Chengzhang Xu, a doctoral student at the Chair of Macromolecular Chemistry II at the University of Bayreuth. She already has her sights set on further research steps: “In Bayreuth, we intend to explore new methods for heat-resistant encapsulation of proteinase K. Encapsulation seems to be a promising way to introduce enzymes into the production of biodegradable plastics.”

“The research results we have achieved using proteinase K as an example are potentially transferable to other proteins. They thus strengthen a still young research direction that is developing new hybrid materials based on enzymatically degradable plastics that can be deformed under heat. These materials not only serve to combat microplastic waste, but can also support the development of new drugs or the regeneration of diseased or damaged tissue, for example,” says Prof. Dr. Andreas Greiner, holder of the Chair of Macromolecular Chemistry II, who coordinated the research work.