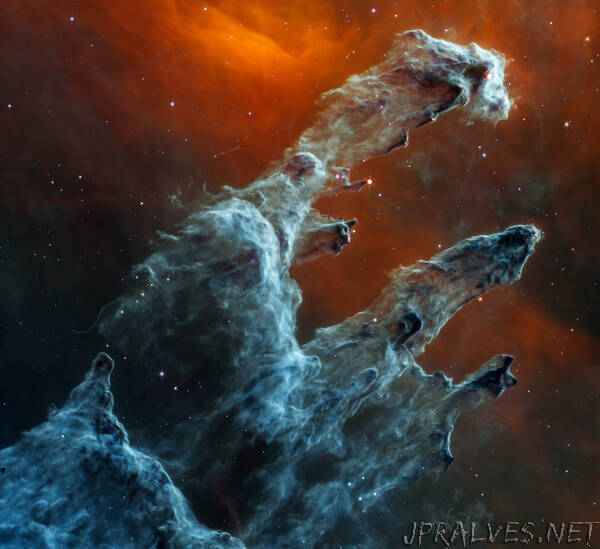 At mid-infrared wavelengths, the Universe is a very different place from the one we are used to seeing with our eyes. Stretching from 3 to 30 micrometres, mid-infrared reveals celestial objects with temperatures of 30 to 700ºC. In this regime, objects that appear dark in visible light images now shine brightly.

For example, the dust clouds in which stars are forming tend to be at these temperatures. In addition, molecules tend to be easy to see at these wavelengths. “It’s such an exciting wavelength range in terms of the chemistry that you can do, and the way you can understand star formation and what’s happening in the nuclei of galaxies,” says Gillian Wright, the Principal Investigator for the European Consortium behind the MIRI instrument.

Our first real glimpses of the mid-infrared cosmos came from ISO, which was operational between November 1995 and October 1998. Arriving in orbit in 2003, Spitzer made further progress at similar wavelengths. Both ISO and Spitzer’s discoveries highlighted the need for a mid-infrared capability with a larger collecting area for better sensitivity and angular resolution to advance many big questions in astronomy.

Gillian and others began to dream of an instrument that could see the mid-infrared in vivid detail. Unfortunately for them, ESA and NASA saw the shorter wavelengths of the near infrared as the primary goal for Webb. ESA would take the lead on a near infrared spectrometer, which became NIRSpec, and NASA set its sights on an imager that became NIRCam.

Not to be deterred, when ESA issued a call for proposals to study their near infrared spectrometer instrument, Gillian and her colleagues saw a chance.

“I led a team that put in a rather cheeky response. It said we’ll study the near infrared spectrograph but we’ll also have an extra channel doing all of this mid-infrared science too. And we presented the science case for why mid infrared astronomy would be fantastic on Webb,” she says.

Although her team did not win that particular contract, the gutsy move helped raise the profile of mid-infrared astronomy in Europe, and she herself was invited to represent those science interests on another ESA study that surveyed European industry’s ability to build infrared instrumentation. Assisted by academic institutions from across Europe, part of that study looked at mid-infrared instrumentation.

The results were so encouraging, as were those of parallel US-led studies, that the appetite for such an instrument grew even larger. By pulling together in Europe an international collaboration of scientists and engineers willing and able to design and build the instrument – and crucially raise the money to do so – Gillian and her collaborators encouraged and gradually convinced ESA and NASA to include it on Webb.

Large consortia are not an unusual way to build spacecraft instruments in Europe. ESA often builds the spacecraft or telescope and then relies of consortia of academic and industrial institutions to raise funds from their national governments to build the instruments. But it is unusual in the US, where NASA usually funded the instrumentation as well.

Extending European leadership in this method of working into the realm of international collaboration with the US, on a flagship NASA mission where the culture of instrument building is so different, was not a guaranteed recipe for success.

“The biggest fear was that this complexity would be the biggest threat to the instrument,” says Jose Lorenzo Alvarez, MIRI Instrument Manager for ESA.

But the gamble paid off as Jose explains, “It was surprising to see the change in attitudes between people with entirely different working cultures. In the first years, we were on a learning curve. In the end, MIRI, which was organisationally more complex, was the first instrument to be delivered.”

In addition to raising their own money, the consortium had been given another caveat: the instrument could have no impact on the Webb’s operating temperatures and optics. In other words, the telescope would remain optimised for the near-infrared instruments, and MIRI would accept whatever it could get. This would limit the instrument’s performance beyond ten micrometres but it was a small price to pay for Gillian. “I never saw it as a compromise because it would still be better than anything we had ever seen before,” she says.

One of the biggest technological hurdles to overcome was that MIRI needed to operate at a lower temperature than the near-infrared instruments. This was achieved with the cryocooler mechanism provided by NASA’s Jet Propulsion Laboratory. To be sensitive to the mid-infrared wavelengths, MIRI operates at around 6 Kelvin (–267°C). This is lower than the average surface temperature of Pluto, which is around 40 Kelvin (–233°C). Coincidently, this temperature is where the other instruments and the telescope operate. Both are extremely cold temperatures but because of that difference, heat from the telescope would still leak into MIRI once it was harnessed to the telescope, unless the two were thermally isolated from one another.

Another challenge was the limited space available for the instrument on the telescope. This was made even more difficult since MIRI was to be effectively two instruments in one, an imager and a spectrometer. It called for some clever design work.

“We’ve got a mechanism, and we not only use light shining off one side, but we use the other side of it, too, just to minimise the number of mechanisms we use and the space we take up. It’s a very interesting and very compact optical design,” says Brian.

The instrument uses one light path for its imager, and another for its spectrometer.

Even after the instrument was completed and delivered to NASA for integration with the rest of the telescope, there were more challenges for the team to face.

The fiercely complicated telescope took longer to complete than anyone had imagined and that meant MIRI and the other instruments would be required to survive on the ground for much longer than originally planned. Designed to remain on Earth for about three years before launch, it took almost a decade more before the spacecraft reached orbit. To ensure the health of the instrument, MIRI was stored in a strictly controlled conditions and periodically tested.

Then on Christmas Day 2021, an ESA Ariane 5 rocket carried the spacecraft into orbit in a picture-perfect launch. In the weeks and months that followed, ground teams readied the telescope and its instruments and handed over to the scientists.

Alongside the other instruments, MIRI is now sending back the kind of data that the scientists had been dreaming about.

“Yeah, those first few months in particular were quite surreal,” says Sarah Kendrew, MIRI Instrument and Calibration Scientist, ESA. “We’d been doing so much preparatory work with simulated data, so in a sense we knew what the data would look like. So you could be looking at it thinking it all looks very familiar, but then at the same time, it’s just like, but it came from space!”

MIRI’s data featured heavily in the very first images released from Webb, including the ‘mountains’ and ‘valleys’ of the Carina nebula, the interacting galaxy group Stephan Quintet, and the Southern Ring Nebula. Subsequent images have continued to raise the bar both in terms of beauty and science.

But this is the essence of cutting-edge science and astronomers are already racing to develop more detailed computer models that can tell them more about the various physical processes that give raise to mid-infrared readings.

“There’s a huge potential for new understanding with MIRI, particularly in star formation and the properties of dust and galaxies. It may take a bit longer to interpret but I think the new science that will come out of MIRI is going to be really, really substantial,” says Sarah.

MIRI, together with the other instruments on Webb, has the potential to advance every branch of astronomy. It is the kind of transformative science that comes about only through a large step-up in capability. And it is a remarkable testament to the team-work and international collaboration that went into the telescope in general, and MIRI in particular.

And now the whole world is benefiting.”