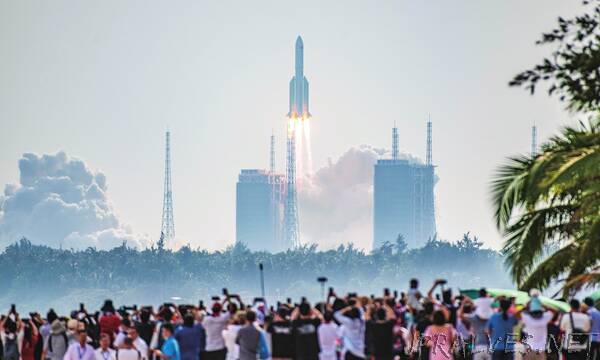 Mengtian, also the second lab module, will be the last piece before China completes the space station assembly.

Carrying the Mengtian lab module, China’s mega Long March-5B Y4 carrier rocket took off from the Wenchang Space Launch Site around 3:37 pm on Monday. And after a flight of around eight minutes, the module separated with the rocket and entered its designated orbit, marking the success of the launch mission, the Global Times learned from the China Manned Space Agency (CMSA).

Following the successful launch, Mengtian will carry out a fast and automated rendezvous and docking with the Tianhe space station core module at the latter’s forward docking port, per the CMSA.

The new lab module will then be transpositioned from the forward docking port on Tianhe to the port docking ring on the side, joining the two earlier modules - Tianhe core module and Wentian lab module, to complete the T-shape China Space Station basic structure.

After completing the building of the China Space Station, six taikonauts of two Shenzhou manned spaceflight crew will carry out the first-ever direct handover in orbit.

The powerful Long March-5B carrier rocket has successfully launched all three modules, each weighing over 22 tons at launch, of the China Space Station to date, proving its strength and reliability, the carrier developer the China Academy of Launch Vehicle Technology said in a statement.

The Long March 5B is a one and half stage carrier rocket with four 3.35-meter-diameter liquid propellant boosters, and has a thrust of 1,078 tons by take-off. It is capable of sending payload of 25 tons to the near-Earth orbit.

Huang Bing, the chief designer of the Long March 5 rocket series, told the Global Times that to meet the mission demands of the space station module launch missions, the Long March-5B rocket has made multiple key technology breakthroughs including the separation of the country’s largest nose cone at 20.5 meters in length.

The Global Times learned from the Shanghai Academy of Spacecraft Technology (SAST) the developer of the Mengtian module that 17.88-meter-long, 4.2-meter-diameter mega space lab weighs around 23.3 tons by launch, which is the heaviest payload China has ever launched to date.

Mengtian module is designed to be a working zone for astronauts and therefore it does not have life support systems like Tianhe and Wentian, nor the dormitory and restrooms. But Mengtian does have installed physical training facility onboard that is similar to the rowing machine on Earth, the SAST introduced.

As the “workshop” for the China Space Station, Mengtian has the most powerful payload supporting capabilities, as it carries 13 standard payload cabinets, hosting experiments mainly in the fields of microgravity scientific studies as well as frontier scientific projects covering fluid physics, combustion and materials science and space technologies.

The Mengtian will carry the world’s first space-based set of cold atomic clocks which will include a hydrogen clock, a rubidium clock and an optical clock.

“If successful, the cold atomic clocks will form the most precise time and frequency system in space, which should not lose one second in hundreds of millions of years,” said Zhang Wei, director of the Utilization Development Center of Technology and Engineering Center for Space Utilization under the Chinese Academy of Sciences.

The world’s first cold atomic clock that operates in space was made by Chinese scientists. It was launched with the Tiangong-2 space lab in 2016, and has a margin of error of less than one second in 30 million years.

Now, through ground-based experiments, Chinese scientists have developed cold atomic clocks that are far more accurate than the Tiangong-2 version, according to Zhang.

Mengtian is made up with four cabins including the working cabin at the forefront connecting to the Tianhe core module in which astronauts can work and do their physical exercises, and interior scientific experiment cabinets are installed.

Moving further from the working cabin, there are payload cabin on the outside and airlock cabin on the inside. That is to say, there is a hidden cargo airlock cabin that will be used for cargo passage. And at the further end of the Mengtian, it is the module’s resource cabin where the Sun-positioning device and flexible solar panels are installed.

To facilitate the supporting function for experiments outside the cabin, Mengtian has prepared as many as 37 payload installation spots on the exterior, providing services such as engineering, electronic as well as information technology support for those experiment to be carried out outside the cabin.

Previously, to carry out experiment on the exterior of the space station cabin, it required taikonauts to conduct extravehicular activities (EVA), but efficiency was limited to the times that EVAs could be arranged and other factors such as the number of payloads and their size.

Now with the new cargo airlock on Mengtian and its unique payload transfer mechanics, cargo including experiment payload could smoothly enter and exit the cabinet automatically.

Such robotic cargo and payload transfer capability reaches 400 kilograms and the size of the cargo envelope for a single shipment reaches 1.15 meters x 1.2 meters x 0.9 meters, greatly increasing the efficiency and reducing the pressure of astronauts, enabling them to invest more time and energy to focus on interior scientific experimental activities.

Also to meet the demand for entry and exit of larger and heavier cargo, Mengtian has installed the country’s first square shape port gate, whose width reaches 1.2 meters.

Just like Wentian lab module, Mengtian has also taken the power solution into consideration to prepare for future more demanding in-orbit experiments. Mengtian is also equipped with giant flexible solar panels, each of which can extend some 138 square meters.

After the completion of the T-shape China Space Station, two pairs of such solar panels on Wentian and Mengtian modules could together generate nearly 1,000 Kilowatt hours of electricity per day, equivalent to the half-year consumption of a household, and according to the SAST, it will mean that the space station will be free of worries of using electricity.

Only when the three modules complete assembly and form the T-shape structure in orbit, can we declare that we have achieved all preset goals; only when they complete the T-shape basic structure, can the power supply, information and thermal control systems deliver their best performances and support relatively larger-scale experiments, said Bai Linhou, deputy chief designer from the space station system at the China Academy of Spacecraft Technology, explaining why the feat was of great significance in the overall building of the China Space Station.

Bai told the Global Times that “the high building efficiency of the China Space Station is the direct evidence of China’s great comprehensive national strength. It would be nearly impossible for any country to build a space station in the near-Earth orbit without the support of a strong national power.”

Pang Zhihao, a Beijing-based senior space expert, told the Global Times that the completion of China’s own space station which is a crucial platform to exploit space resources, will be a landmark event for not only manned space technology but for the field of space technology as a whole, and it will form a tremendous push to drive China to advance into a space power.

“China, following the USSR/ Russia, the US, will become the third country to pull off the feat, and more importantly, our space station technology is very advanced”, Pang hailed.

China Space Station is about to complete the building of its ultimate T-structure including Tianhe core module with Mengtian and Wentian lab modules on the side, the weight of the three-module combination would exceed 60 tons; and if the Tianzhou cargo spacecraft and Shenzhou manned spacecraft are counted all together, the mass weight of the China Space Station would be near 90 tons, Wei Dongxu, a space observer and TV commentator, told the Global Times.

It will mean China has built a platform that is capable of hosting a great number of in-orbit scientific experiments and accommodating astronauts with better life and working conditions, Wei said.

The Tiangong space station will also become a new platform on the basis of which China would explore and push forward deepened space cooperation, “Astronauts from friendly countries, in the future, would participate directly in missions onboard and our outcomes of space scientific experiment will be also shared with the rest of world”, he said.

“The completion of the Tiangong Space Station is a significant technical achievement by China. The Chinese station may offer some stability at a time when the US and its partners will be undergoing a period of transition from the ISS to the development and use of commercial space stations,” Mariel Borowitz, Associate Professor with the Sam Nunn School of International Affairs of the Georgia Institute of Technology, Atlanta, the US, told the Global Times via email.

“The ultimate value of the Chinese station will also depend on the extent that it can be leveraged to conduct scientific research, as well as the extent that China is able to enable international engagement in this new platform,” she said.

Bai revealed that China Space Station is currently drafting cooperation standards for rendezvous and docking as well as payload installation onboard, which then would be announced to the world.

“The China Space Station will always be an open platform for global cooperation, and China is drafting cooperation standards, for rendezvous, docking and payload installation, which is to be released to the whole world,” Bai revealed.

Foreign spacecraft, or experimental payloads, as long as they are in line with our standards in designing their docking devices and make sure their safety meets our requirements, are all welcome to come onboard,” Bai said.

In fact, China has repeatedly extended warm and sincere welcomes to international astronauts to the China Space Station.

Foreign astronauts are welcome to work in China’s space station, Taikonaut Wang Yaping, also a delegate of the 20th National Congress of the Communist Party of China (CPC), said during an interview at the Great Hall of the People in Beijing on October 16.

China is implementing its first batch of international cooperation programs on board the Tiangong space station, and will hopefully upload those experiments by the end of the year. Foreign astronauts are welcome to Tiangong to make greater contributions to the shared future of mankind, Chinese Foreign Ministry spokesperson Wang Wenbin remarked in April.

Although China has independently designed, built and launched the space station, it will be a real international space station, as China would invite more developing countries and European partners to use the space station together, said Song Zhongping, a space expert and TV commentator.

Song said it is also possible that China will train astronauts for certain other countries to facilitate their use of the China Space Station, and to become payload expert to carry out experiment in orbit. “That would mean that we are truly open to those countries that are friendly to China,” he added.

The successful construction of its own space station would consolidate China’s status as a space power, laying grounds for future deep-space exploration missions and forming the landscape of global space power with the US, China and Russia on the top, Song noted.

The completion of building of the space station will be a milestone in China’s space technology development and drive all-around development for a variety of fundamental industries and stimulate new applications such as space breeding and new materials, Song added.”