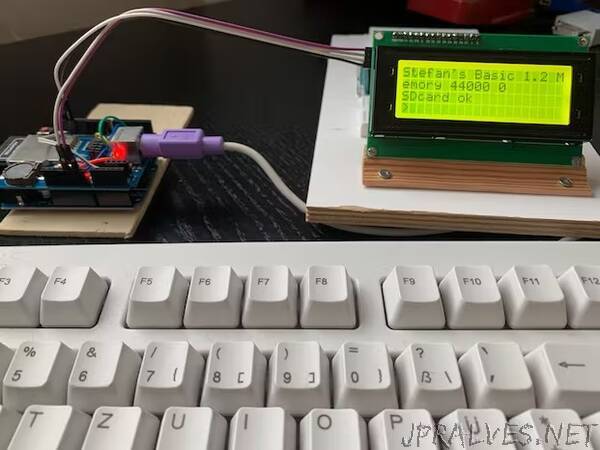 “A little computer based on a datalogger shield, an ESP8266 dev board and a few other components running an IoT capable BASIC interpreter.

The Idea
This project is about building a small IoT computer running with BASIC with low cost components. There is a lot of powerful hardware on the market that can be used for it. Integrating them properly can get a lot of compute power for almost no money.

The computer presented here serves in my home as an MQTT display station. It is connected to Wifi, reads messages from an MQTT broker, displays and records them. It has an PS2 keyboard interface and can be used as a standalone system. Alternatively the programs on it can be changes via the serial or USB interface.

I use some really funny components to build it. The key ingredients to the recipe, the Wemos D1 R1 board and the SD/DS1307 datalogger shield are incompatible without hardware modifications.

The fun in this project is to make two things work together that weren’t properly designed for it.

The Wemos D1 R1 boards are based on a ESP8266 and look like an Arduino UNO. The pinout is somehow identical to the UNO which can be misleading. Some of the ESP8266 pins have different functions which makes it difficult to use UNO shields on the Wemos D1. Wemos tried to position them as an Arduino UNO competitor. After a while they discontinued the Website and the manufacturing. The boards are still on the market from third party vendors at 6 Euros a piece. They offer a lot of processing power and memory.

The second ingredient to the recipe is a data logger shield. These shield where designed and manufactured for UNOs and contain a DS1307 real time clock, a SD card holder and a small prototype area. Many Chinese manufactures make them now following and original design from around 2010. They come at 4 Euros a piece.

Typical prices for the two components together would be 10 Euros.

All this can be overcome with a bit of shield modding. This makes the project a little more advanced. This tutorial is about the inner workings of some of these components and technologies used.”