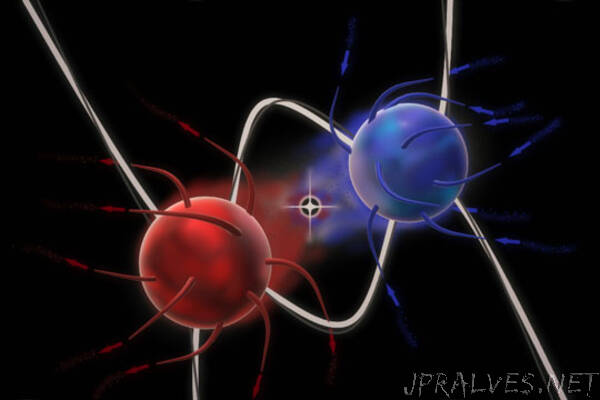 For the first time, U.S. and European physicists have found a way to switch the topological state of a quantum material on and off.

Because they are extremely stable and have immutable features that cannot be erased or lost to quantum decoherence, topological states play an important role in materials research and quantum computing. In a study published in Nature Communications, researchers from Rice University, Austria’s Vienna University of Technology (TU Wien), Los Alamos National Laboratory and the Netherlands’ Radboud University described their method of using a magnetic field to activate and deactivate a topological state in a strongly correlated metal.

“Topological properties are usually found in insulating materials with weak electron correlations,” said Rice study co-author Qimiao Si, a member of the Rice Quantum Initiative and director of the Rice Center for Quantum Materials (RCQM). “The material we study is metallic and is strongly correlated.”

Strongly correlated quantum materials are those where the interactions of billions upon billions of electrons give rise to collective behaviors like unconventional superconductivity or electrons that behave as if they have more than 1,000 times their normal mass. Though physicists have studied topological materials for decades, they have only recently begun investigating topological metals that host strongly correlated interactions.

In the new study, Bühler-Paschen’s team found small impurities or external disturbances did not bring about a dramatic change in the material’s topological properties, but the application of a laboratory-scale external magnetic field could.

“The strong electron correlations make the Weyl-Kondo semimetal extremely responsive to external probes such as a magnetic field,” said Si, Rice’s Harry C. and Olga K. Wiess Professor of Physics and Astronomy. “Electrons do not experience the effect of an external magnetic field individually. Instead, they organize collectively, which drastically amplifies the materials’ response to the external magnetic field.”

Si said the metallic nature of the topological state lends itself to versatile means of control. Si said the Weyl-Kondo semimetal has charge carriers described by physicist Hermann Weyl’s 1929 relativistic wave equation, which dictates that they come in two varieties with opposite chirality. Like particles of matter and antimatter, Weyl fermions with opposite chirality annihilate one another if they collide.

Without electron correlations, it would be impossible to generate a magnetic field with enough strength to push together Weyl fermions of opposite chirality, Si said. But strong correlations in the Weyl-Kondo semimetal allowed Bühler-Paschen’s team to use an external field to force the Weyl fermions to annihilate one another, thus switching off the topological state.

“You can even make them disappear completely at a certain point,” Bühler-Paschen said. “So we have stable, robust properties that you can selectively turn on and off.”

The switchable topological states could possibly be used for sensor technology, she said.

Si said strong correlations cause the Weyl fermions to couple with radiation in the microwave range, which is particularly important for many technical applications. He said the technology might also be used for ”entirely new, more exotic applications in electronics,” including quantum computers.