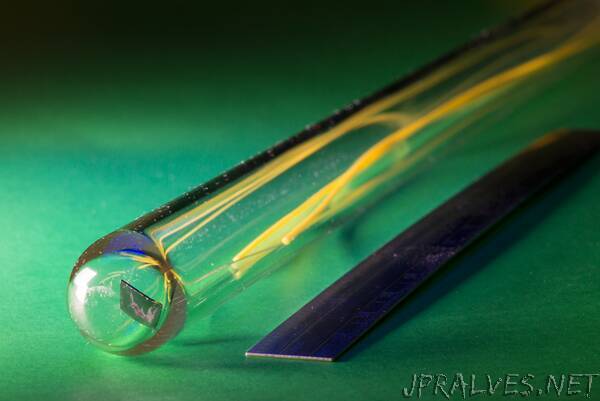 “An algorithm could reduce the effects of long-term drift in fiber Bragg-grating temperature sensors, making them potentially more useful to industry.

Photonic thermometers – which measure temperature using light – have been around in optical fiber form for decades. These devices, called fiber Bragg gratings, are embedded in commercially available fibers thinner than a human hair, similar to the ones ubiquitous in network communications.

Inexpensive and with the ability to be embedded into structures that might otherwise be difficult to access, the sensors are used routinely in civil infrastructure (which includes bridges and tunnels) and in the oil and gas industries. But they aren’t quite accurate enough for some other applications that might otherwise make use of them, including monitoring of freezers, ovens, medical-grade refrigerators, and certain industrial processes.

One significant hit to the sensors’ accuracy comes from long-term drift. This occurs when, over time, the same temperature results in a different reading. Recalibrating the sensor every few months fixes the problem, but this can be expensive and time-consuming, especially if the sensor is buried in concrete or otherwise embedded permanently in a structure.

In a new paper published this week in Sensors and Actuators A: Physical, a scientist from the National Institute of Standards and Technology (NIST) describes how he has used machine learning techniques to predict the long-term drift of existing fiber Bragg-grating sensor technology. The proof-of-concept work shows how a type of artificial intelligence called machine learning can allow researchers to make self-calibrating or self-correcting sensors using existing technology.

It also presents another option for scientists who might otherwise have to spend time and money to develop an entirely new technology for their application but wouldn’t have to if a cheaper, off-the-shelf sensor could do the job, says study author Zeeshan Ahmed.

“It’s an alternative approach where you can have your cake (keep the existing technology) and eat it too (reduce the contribution of long-term drift),” Ahmed said. “Fiber Bragg-grating sensors are cheap. Rather than spending five years to develop better materials, why not just use this algorithm, or a similar one in this family of algorithms?”

Ahmed’s model was able to reduce measurement uncertainties due to drift by about 70%, which may potentially be sufficient for studying some processes that rely on temperature control, such as industrial fermentation (the use of microorganisms to create chemicals and medicines).

Fiber Bragg gratings are not the only kinds of photonic sensors out there. NIST researchers including Ahmed have been developing chip-based photonic thermometers that, compared to traditional thermometry techniques, promise to be smaller and more durable, resistant to electromagnetic interference, and potentially self-calibrating.

But those chip-based sensors are still in the testing phase. The fiber-based thermometers that are the subject of this work are an older technology. These Bragg sensors work by manipulating light’s interaction with structures etched into a fiber optic cable. The grating works as a kind of filter for light, permitting only certain wavelengths to travel through the cable. Which wavelengths are allowed through depends on the temperature and pressure, as well as the spacing between the etchings in the grating.

But over time, as the Bragg sensor is exposed to high temperatures, something changes in the chemistry of the device to permanently change the fiber material’s refractive index, which is a measure of how fast light travels through a medium. That permanent change in refractive index is thought to be responsible for the drift errors.

Long-term drift in these sensors causes uncertainties in the temperature ranging from 200 to 300 millikelvin, equivalent to a third to a half a degree Fahrenheit (°F).

“To be competitive with existing technology, you want to get that down to about half that value, and if possible to a few tens of millikelvin,” the equivalent of less than a tenth of a degree Fahrenheit, Ahmed said.

Algorithm Wars: A New Model
Though his work resulted in a model that is practical in a proof-of-concept way, Ahmed’s original intention was to help scientists better understand the drift problem.

“I thought, ‘If I can understand the direct process and compensate for it mathematically, then I can reduce these uncertainties to an acceptable level,’” Ahmed said.

Ahmed knew that in problems of machine learning you need a lot of data, so he ran experiments with almost two dozen sensors. He collected many kinds of data: the band of wavelengths of laser light being piped into the fiber; the power of that laser light; the type of fiber optic cable used; the temperature the fiber was exposed to as measured by a separate, highly reliable thermometer; the spectral signature of the light exiting the grating, with features such as the intensity of the output at different wavelengths. He also collected circumstantial information such as, how long this thermometer has been measuring a certain temperature, what the temperature was immediately before, and how quickly the temperature changed.

Then he began exploring connections – standard practice in machine learning, where you plot data in different ways and test your hypotheses.

“It’s an iterative process,” Ahmed said. “I’m directing it and taking advantage of incorporating my physics knowledge into building up the models.

His explorations with the data showed that the total amount of light reflected by the grating, as well as the intensity of light at each wavelength, were helpful in predicting future drift. The past history of the sensor (i.e., how fast it was heated or cooled, or how high the temperature was, in the hours leading up to the change) also contributed.

He found that what works best is an auto-regressive integrate moving average (ARIMA), a class of mathematical models created in the 1970s. ARIMA models are good for problems of forecasting, such as determining future demand for food or which stocks will skyrocket.

“I’m not using the most advanced technique,” Ahmed said. “That’s actually one of the points in the paper: Even the older methods can give you a lot of information.”

The downside is that this model only works in the short term – for drift occurring over a few weeks rather than months or years.

Ahmed says that a second algorithm paper, still in review, details his attempt at making a true physics-based model that lays out the fundamental relationship between wavelength and temperature in both fiber- and chip-based photonic thermometers.

“That would be even better,” Ahmed said. “If we have a physics-based model, then we can describe how the physics is changing over time and that’s causing the changes in the calibration of these devices. And then we could really understand and quantify what’s happening to your sensor.””