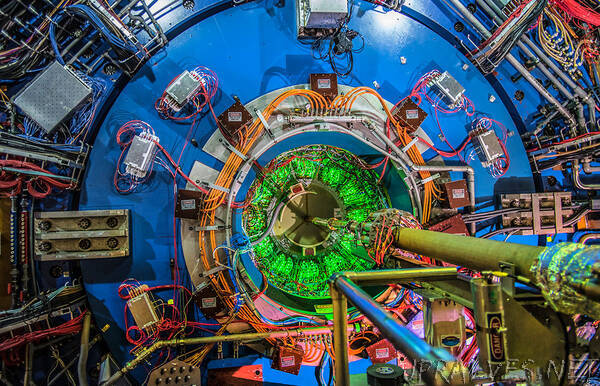 “The nuclear physics research programme at the U.S. Department of Energy’s (DOE) Brookhaven National Laboratory is entering an exciting time. After completing its 22nd successful physics run, the Relativistic Heavy Ion Collider (RHIC), a DOE Office of Science user facility, will be getting a brand-new house-sized particle detector. This new detector, known as sPHENIX – together with RHIC’s newly enhanced STAR detector – will greatly advance physicists’ ability to study subtle details of quark-gluon plasma (QGP) – a remarkable form of matter that filled the early Universe. RHIC recreates tiny specks of this early-Universe particle soup thousands of times each second by colliding the nuclei of atoms at nearly the speed of light.

Over the next three years, sPHENIX and STAR will provide unprecedented views of the primordial plasma, in which the most fundamental building blocks of visible matter – quarks and gluons – flow like a nearly perfect liquid with virtually no resistance. Those studies will complete RHIC’s mission to unravel the mysteries of QGP, including how it evolved nearly 14 billion years ago into the protons and neutrons that make up the nuclei of atoms.

Meanwhile, we are making steady progress on plans to transform RHIC into the world’s first polarized Electron-Ion Collider (EIC), in partnership with Thomas Jefferson National Accelerator Facility and collaborators around the world. The EIC will collide polarized electrons with ions (polarized protons or atomic nuclei) so scientists can study how quarks and gluons behave within the confines of these nuclear particles as they exist in our world today. The electron beams at the EIC, and the knowledge the collisions of electrons with ions will reveal about the arrangement and interactions of quarks and gluons, will help us understand the force that holds these fundamental building blocks – and nearly all visible matter – together.

It is an ambitious plan. However, we are confident we can deliver both the compelling science of RHIC’s remaining years and the completion of the EIC by early next decade so we can enter this exciting new frontier in nuclear physics.

Building on a track record of success

One reason for our confidence is our track record of success at RHIC. Since beginning operations in 2000, RHIC has operated well beyond its initial design expectations. For example, accelerator upgrades and innovative techniques have pushed the luminosity of RHIC (a measure related to the number of particle collisions per unit time) to ~50 times the level for which it was originally designed for collisions between beams of gold ions. In addition, RHIC’s detectors have been continuously updated with new components and capabilities, pushing the state-of-the-art of detector technology.

By conducting a wide variety of particle collisions – between everything from protons to gold and uranium ions, and many moderate-sized ions in between – across an energy range accessible only at RHIC, we have discovered the quark-gluon plasma (QGP), probed details of the transition from QGP to matter as we know it, shown that matter can be created from collisions of the light particles surrounding RHIC’s ions, and explored a range of other interesting phenomena. Experiments at RHIC have also probed the origins of proton spin, revealing for the first time that the gluons contribute to this fundamental property. We have also learned to use the protons’ spin alignment as a tool for beginning to measure three-dimensional characteristics of the internal structure of protons and nuclei, building out capabilities that will be essential for the science of the Electron-Ion Collider.

Even when things do not run perfectly, Brookhaven Lab’s Collider-Accelerator Department staff, and scientists and technicians at the detectors, rise to the challenges. For example, in Run 22, an interruption in power disabled one of RHIC’s Siberian snakes – a corkscrew-shaped magnet designed to regularly flip the spins of polarized protons. Accelerator physicists, magnet specialists, engineers, and technicians worked tirelessly to come up with creative solutions. In the end, they delivered beams that enabled STAR, with new detection capabilities, to make nearly all its planned measurements, and even exceed one of its physics goals.

During the run, STAR commissioned newly installed detectors placed very close to the beam. The successful construction and installation of these components progressed safely even under considerable challenges – including limited staff on site and supply chain interruptions – posed by the COVID-19 pandemic. And sPHENIX entered a major phase of assembly. This new detector will be ready for commissioning and data, together with STAR, when RHIC begins colliding gold nuclei for Run 23 next year.

RHIC Run 23 and beyond
For the start of Run 23, RHIC’s luminosity will be kept deliberately low so that physicists can ‘test drive’ the components of the brand-new sPHENIX detector. These include inner and outer hadronic calorimeters, electromagnetic calorimeters, a continuous read-out time projection chamber (TPC), and a next-generation silicon pixel detector.

Together, these components make sPHENIX a state-of-the-art ‘jet detector’ – allowing physicists to fully reconstruct jets created as the energy of individual fast-moving quarks and gluons is transformed into a cascade of new particles. That is exactly what sPHENIX will do when collision rates ramp up after the commissioning phase. When combined with comparison data from proton-proton collisions to be collected in RHIC Run 24 (and additional gold-gold data from Run 25), these data will help physicists tease out how jets of different energies – and generated by quarks with subtly different masses – interact with the plasma.

Run 23 will be the first time that STAR uses its full suite of recent upgrades to analyse data from top-energy (200 billion electron volt, or GeV) gold-gold collisions. These include an upgraded inner TPC and the ‘forward’ detectors that allow physicists to track particles emerging from collisions close to the beamline and at wider angles than ever before. STAR will also be operating with double the readout speed from its time projection chamber for the first time. These new detector components will allow STAR physicists to, among other things, probe the earliest stages of the collisions, measure the temperature and other key properties of the quark-gluon plasma, and explore how jets lose energy in the plasma.

Detector for the next frontier
Many of the Run 23-and-beyond capabilities and measurements at sPHENIX and STAR will also lay the foundation for future measurements at the EIC. The ability to track particles using STAR’s forward components, for example, gives physicists access to very low-momentum gluons, which, because of their abundance, may play a significant role in generating the properties of visible matter. EIC is designed to explore these gluon distributions with exquisite detail.

Components of sPHENIX – including the superconducting magnet at its core and its outer hadronic calorimeter – are included in the design chosen as the basis for an initial EIC detector.

The EIC project detector will act like a giant microscope with high-precision tracking systems for reconstructing the trajectories of charged particles and high-resolution calorimeter systems for measuring their energies. Particle identification systems will distinguish the various charged particles from neutral particles. Of course, such a complex detector will employ efficient data acquisition systems incorporating Machine Learning (ML) and Artificial Intelligence (AI) algorithms to focus on the events that are most likely to lead to discoveries, as well as advanced software and computing approaches for analysing its data.

Accelerator advances
On the accelerator front, the EIC team has been laying out the careful plans for a transition timed with the end of the RHIC science programme so we can leverage both the RHIC accelerator infrastructure and the highly skilled workforce that operates it.

We prepared the conceptual design for the EIC facility in 2020, and the U.S. Department of Energy approved the preliminary project plans in 2021. The facility design takes advantage of existing RHIC infrastructure. Like RHIC, the EIC will consist of two intersecting accelerators. The EIC will reuse and upgrade one of RHIC’s proton/ion storage rings (also called a hadron storage ring), as well as the ion sources and chain of accelerators that bring the ions up to speed before they enter the collider. The EIC team will add a rapid cycling synchrotron to accelerate an intense beam of spin-aligned (polarized) electrons, plus a new ring for storing those accelerated electrons while maintaining their intensity and spin polarization. We will also add a ‘strong hadron cooling’ system to keep the ion beams tightly packed. This cooling will increase the frequency of collisions – and the amount of data captured by an EIC detector built surrounding an interaction region where the paths of the ions and electrons cross.

There are many technological challenges to meet these accelerator design requirements, but we are making steady progress. We are developing advanced superconducting radiofrequency cavities for accelerating the ions and electrons, superconducting magnets for steering and focusing beams, and precision instrumentation for measuring and correcting beam properties. We are exploring how to make the best spin rotator devices for maintaining particle spin polarization, vacuum systems required to create the pristine conditions for studying interactions among the tiniest components of matter, and cryogenics to cool the machine’s superconducting magnets and other components to their near-absolute-zero operating temperatures.

The promise of discovery
These capabilities, including the unique ability to collide spin-polarized beams, will give the EIC the energy and high collision rates needed to address some of the most profound questions in physics. These include how quarks and gluons – and their interactions – contribute to the mass of visible matter, the spin of the proton, and other properties of nuclear matter such as gluon saturation.

These are compelling mysteries. Consider the question of mass: we know that quarks are nearly massless, accounting for no more than 1% of a proton’s total mass. Gluons have no mass. And the famed Higgs particle plays essentially no role in the masses of protons and neutrons. Where is the remaining 99% needed to account for the masses of the building blocks that make up most visible matter in our Universe?

We suspect the answer lies in the strong-force interactions among quarks and gluons and gluon self-interactions. If those interactions are sufficiently strong, they could generate the energy that gives mass to matter as described by Einstein’s famous equation, E=mc2. The high-intensity electron beam of the EIC will allow physicists to ‘see’ inside protons and nuclei to map out the arrangement of these particles and probe their interactions, which may give us a piece of the answer.

The prospect for profound discoveries – and indeed the challenges inherent in building a unique cutting-edge machine – are a big part of what has drawn the interest of a worldwide community of nuclear and accelerator physicists to the EIC project. Already, we have a user group of 1,300 physicists from more than 250 institutions around the globe.

We believe the biggest challenges attract the brightest minds, and we are confident that our EIC team will deliver the EIC and the detector technologies required to extend the frontiers of discovery in nuclear physics.

Along the way, their contributions will likely spark technological advances that extend to other fields – for example, in computing, electronics, energy, and medicine. Some specific examples might include:

- New medical isotopes and particle beam approaches for diagnosing and treating cancer;
- Computational tools for simulating climate change, tracking global pandemics, and protecting national security; and
- Accelerator advances for making and testing computer chips, studying proteins and therapeutic drugs, designing better batteries, and more.
We are well on our way and eager to see where our explorations lead us – both within the realm of physics and beyond.

Acknowledgements
Special thanks to Karen McNulty Walsh and those who contributed updates for this piece, including Elke-Caroline Aschenauer, Haiyan Gao, David Morrison, Lijuan Ruan, Ferdinand Willeke, and Jim Yeck.”