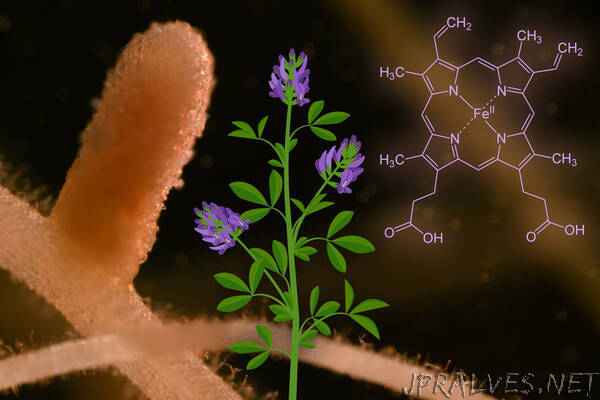 “The peptide is used by legumes to control nitrogen-fixing bacteria; it may also offer leads for treating patients with too much heme in their blood.

Symbiotic relationships between legumes and the bacteria that grow in their roots are critical for plant survival. Without those bacteria, the plants would have no source of nitrogen, an element that is essential for building proteins and other biomolecules, and they would be dependent on nitrogen fertilizer in the soil.

To establish that symbiosis, some legume plants produce hundreds of peptides that help bacteria live within structures known as nodules within their roots. A new study from MIT reveals that one of these peptides has an unexpected function: It sops up all available heme, an iron-containing molecule. This sends the bacteria into an iron-starvation mode that ramps up their production of ammonia, the form of nitrogen that is usable for plants.

“This is the first of the 700 peptides in this system for which a really detailed molecular mechanism has been worked out,” says Graham Walker, the American Cancer Society Research Professor of Biology at MIT, a Howard Hughes Medical Institute Professor, and the senior author of the study.

This heme-sequestering peptide could have beneficial uses in treating a variety of human diseases, the researchers say. Removing free heme from the blood could help to treat diseases caused by bacteria or parasites that need heme to survive, such as P. gingivalis (periodontal disease) or toxoplasmosis, or diseases such as sickle cell disease or sepsis that release too much heme into the bloodstream.

“This study demonstrates that basic research in plant-microbe interactions also has potential to be translated to therapeutic applications,” says Siva Sankari, an MIT research scientist and the lead author of the study, which appears today in Nature Microbiology.

For nearly 40 years, Walker’s lab has been studying the symbiosis between legumes and rhizobia, a type of nitrogen-fixing bacteria. These bacteria convert nitrogen gas to ammonia, a critical step of the Earth’s nitrogen cycle that makes the element available to plants (and to animals that eat the plants).

Most of Walker’s work has focused on a clover-like plant called Medicago truncatula. Nitrogen-fixing bacteria elicit the formation of nodules on the roots of these plants and eventually end up inside the plant cells, where they convert to their symbiotic form called bacteroids.

Several years ago, plant biologists discovered that Medicago truncatula produces about 700 peptides that contribute to the formation of these bacteroids. These peptides are generated in waves that help the bacteria make the transition from living freely to becoming embedded into plant cells where they act as nitrogen-fixing machines.

Walker and his students picked one of these peptides, known as NCR247, to dig into more deeply. Initial studies revealed that when nitrogen-fixing bacteria were exposed to this peptide, 15 percent of their genes were affected. Many of the genes that became more active were involved in importing iron.

The researchers then found that when they fused NCR247 to a larger protein, the hybrid protein was unexpectedly reddish in color. This serendipitous observation led to the discovery that NCR247 binds heme, an organic ring-shaped iron-containing molecule that is an important component of hemoglobin, the protein that red blood cells use to carry oxygen.

Further studies revealed that when NCR247 is released into bacterial cells, it sequesters most of the heme in the cell, sending the cells into an iron-starvation mode that triggers them to begin importing more iron from the external environment.

“Usually bacteria fine-tune their iron metabolism, and they don’t take up more iron when there is already enough,” Sankari says. “What’s cool about this peptide is that it overrides that mechanism and indirectly regulates the iron content of the bacteria.”

Nitrogenase, the main enzyme that bacteria use to fix nitrogen, requires 24 to 32 atoms of iron per enzyme molecule, so the influx of extra iron likely helps those enzymes to become more active, the researchers say. This influx is timed to coincide with nitrogen fixation, they found.

“These peptides are produced in a wave in the nodules, and the production of this particular peptide is higher when the bacteria are preparing to fix nitrogen. If this peptide was secreted throughout the whole process, then the cell would have too much iron all the time, which is bad for the cell,” Sankari says.

The peptide that the researchers studied in this work may have potential therapeutic uses. When heme is incorporated into hemoglobin, it performs a critical function in the body, but when it’s loose in the bloodstream, it can kill cells and promote inflammation. Free heme can accumulate in stored blood, so having a way to filter out the heme before the blood is transfused into a patient could be potentially useful.

A variety of human diseases lead to free heme circulating in the bloodstream, including sickle cell anemia, sepsis, and malaria. Additionally, some infectious parasites and bacteria depend on heme for their survival but cannot produce it, so they scavenge it from their environment. Treating such infections with a protein that takes up all available heme could help prevent the parasitic or bacterial cells from being able to grow and reproduce.

In this study, Lourido and members of his lab showed that treating the parasite Toxoplasma gondii with NCR427 prevented the parasite from forming plaques on human cells.

The researchers are now pursuing collaborations with other labs at MIT to explore some of these potential applications, with funding from a Professor Amar G. Bose Research Grant.

“There are many possible directions, but they’re all at a very early stage,” Walker says. “The number of potential clinical applications is very broad. You can place more than one bet in this game, which is an intriguing thing.”

Currently, the human protein hemopexin, which also binds to heme, is being explored as a possible treatment for sickle cell anemia. The NCR247 peptide could provide an easier to deploy alternative, the researchers say, because it is much smaller and could be easier to manufacture and deliver into the body.

The research was funded in part by the MIT Center for Environmental Health Sciences, the National Science Foundation, and the National Institutes of Health.”