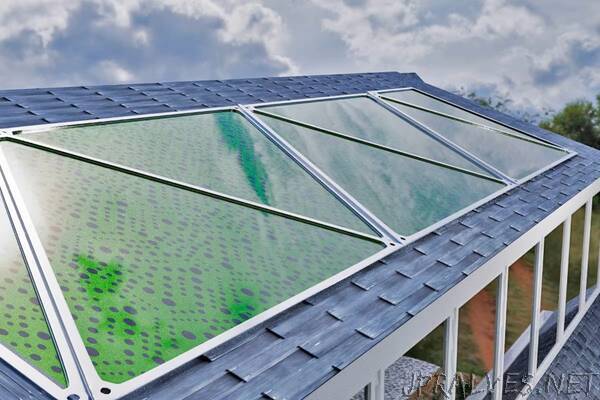 “Beautifully designed, energy-generating bio-panels that suck up carbon dioxide and pump out biomass for use as fuel or fertilizer – that’s the idea behind Mexican startup Greenfluidics and its nanotech-enhanced microalgae bioreactor building panels.

The idea of using flat algae tanks on the outside of buildings as part of a sustainability exercise is not new. Indeed, back in 2013, Splitterwerk Architects and engineering company Arup teamed up to create a full-scale demonstration building, called the BIQ, featuring no less than 200 sq m (2,150 sq ft) of algae bioskin panels.

These panels, tinted green by the biomass sandwiched within, serve several purposes. They take a stream of carbon dioxide, captured from what would otherwise be an emissions source, and bubble it through water impregnated with selected strains of algae, which absorb the CO2, as well as sunlight, and photosynthesize, increasing their mass and generating fresh oxygen. The more sunlight is available, the faster the algae will grow, capturing about two pounds of carbon dioxide for each pound of algae.

These panels also trap heat in their water, which serves two purposes in the BIQ – firstly, with the panels mounted outside, it shades the building, reducing air conditioner energy use in the summer. Secondly, that heat can be harvested – as can the biomass itself. The biomass generated by the BIQ is periodically filtered out as a mashy pulp, then taken away and reprocessed into combustible biofuel, which is then brought back into the building and fed into the burner that runs the building’s hot water system. Between the biomass fuel and the heat captured from the water in the panels, the BIQ is able to sustainably cover about a third of its water-heating energy requirements.

Greenfluidics wishes to make a couple of tweaks to this process. Chiefly, the innovation here is in the thermal capture and conversion. In an interview with Mexico Business News, Greenfluidics CEO Miguel Mayorga described how his company’s system uses nanofluids – effectively, recyclable carbon nanoparticles are added to water, increasing its heat conductivity. This is run through one side of the panels, improving its heat capture, while the algae are grown on the other side. The heat in this case is transformed directly into electricity through a thermo-electric generator, and fed into the building, making these algae panels more analogous to traditional solar panels.

There seems to often be a bit of Photoshop involved when it comes to cool-looking algal devices. In the renders, as with this XBOX-style standalone bioreactor, they seem to glow a refreshing lime green, whereas in operation they seem to look a bit more drab and … well, algal. Still, Greenfluidics wants to build its panels in a range of attractive designs that can elevate the architecture and provide a green focus. Founded in 2018, the company is hoping to have a product commercialized soon. In the meanwhile, it’s won a fair swag of awards.

We still have reservations about the ultimate viability of the product here – after all, since the BIQ building has been open for some nine years now, one would expect the idea to have proven itself and taken off if it was indeed a game-changer for sustainable design. A feasibility review of the BIQ concept was published in 2016, collating feedback from a group of Australian engineers, architects, urban planners, bioengineers, surveyors, building sustainability managers and other potential stakeholders, and it echoes and expands on some of our concerns.

How long would these panels last? How often would you have to clean them out, and do people need to abseil down the walls to do it? Would the algae gunk up the valves and pipework? Would the green-tinted light they let through make people feel queasy? Since the BIQ has to shut down through winter, are there algal strains available that’ll work year-round in a range of climates? Will they make people sick if there’s a leak?

Then there’s the economics; the BIQ was an early pilot project, but its panels increased the cost of the building facade by a factor of 10. Assuming economies of scale, what’s the green premium on algae panels in a mass-market implementation? How much can you sell your sludgy biomass for once it’s filtered out? What are the running costs? How much will it bring your power bills down? Is there a minimum size for a viable deployment of this stuff?

Probably most importantly, how does the energy generation and building cooling compare against boring old solar panels, window tinting and insulation? Carbon capture and oxygen release are lovely, but they don’t show up on the balance sheet for a building operator. These things will really need to sing for their supper if the idea of bubbling, green, transparent building panels is going to take off.

Greenfludics claims on its website that “each Biopanel can generate up to 328 KWh/m2 per year.” This, as commenters below point out, seems extremely optimistic. A little quick math on my own rooftop solar PV array finds that it produced much less – 210 kWh/m2 over the course of 2021 – and solar panels should be far more efficient than a thermoelectric generator. Perhaps Greenfluidics has presented a hyper-idealized figure there rather than a real-world one, but it had best set about producing some extraordinary proof for its extraordinary claim.

The other two numbers it touts are a shade-cooling effect that could save “up to 90 kWh/m2” per year, and that its solution can “improve air quality by mitigating from 200 kg CO2/year,” which really makes no sense without some idea of scale.

We fear this tech might end up falling into the “too complex, too expensive, fails to deliver on its claims” category – but we’d be delighted to be surprised on this one and we’ll be watching Greenfluidics’ progress with interest.”