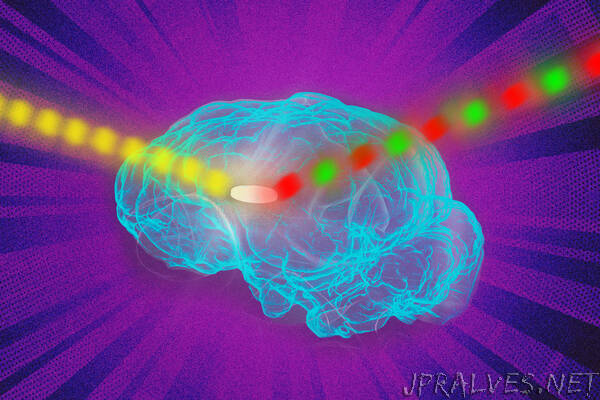 “The advance allows the particles to be placed deeper within biological tissue, which could aid with cancer diagnosis or monitoring.

Fluorescent sensors, which can be used to label and image a wide variety of molecules, offer a unique glimpse inside living cells. However, they typically can only be used in cells grown in a lab dish or in tissues close to the surface of the body, because their signal is lost when they are implanted too deeply.

MIT engineers have now come up with a way to overcome that limitation. Using a novel photonic technique they developed for exciting any fluorescent sensor, they were able to dramatically improve the fluorescent signal. With this approach, the researchers showed they could implant sensors as deep as 5.5 centimeters in tissue and still get a strong signal.

This kind of technology could enable fluorescent sensors to be used to track specific molecules inside the brain or other tissues deep within the body, for medical diagnosis or monitoring drug effects, the researchers say.

“If you have a fluorescent sensor that can probe biochemical information in cell culture, or in thin tissue layers, this technology allows you to translate all of those fluorescent dyes and probes into thick tissue,” says Volodymyr Koman, an MIT research scientist and one of the lead authors of the new study.

Naveed Bakh SM ’15, PhD ’20 is also a lead author of the paper, which appears today in Nature Nanotechnology. Michael Strano, the Carbon P. Dubbs Professor of Chemical Engineering at MIT, is the senior author of the study.

Scientists use many different kinds of fluorescent sensors, including quantum dots, carbon nanotubes, and fluorescent proteins, to label molecules inside cells. These sensors’ fluorescence can be seen by shining laser light on them. However, this doesn’t work in thick, dense tissue, or deep within tissue, because tissue itself also emits some fluorescent light. This light, called autofluorescence, drowns out the signal coming from the sensor.

“All tissues autofluoresce, and this becomes a limiting factor,” Koman says. “As the signal from the sensor becomes weaker and weaker, it becomes overtaken by the tissue autofluorescence.”

To overcome this limitation, the MIT team came up with a way to modulate the frequency of the fluorescent light emitted by the sensor so that it can be more easily distinguished from the tissue autofluorescence. Their technique, which they call wavelength-induced frequency filtering (WIFF), uses three lasers to create a laser beam with an oscillating wavelength.

When this oscillating beam is shined on the sensor, it causes the fluorescence emitted by the sensor to double its frequency. This allows the fluorescent signal to be easily picked out from the background autofluorescence. Using this system, the researchers were able to enhance the sensors’ signal-to-noise ratio more than 50-fold.

One possible application for this kind of sensing is to monitor the effectiveness of chemotherapy drugs. To demonstrate this potential, the researchers focused on glioblastoma, an aggressive type of brain cancer. Patients with this type of cancer usually undergo surgery to remove as much of the tumor as possible, then receive the chemotherapy drug temozolomide (TMZ) to try to eliminate any remaining cancer cells.

This drug can have serious side effects, and it doesn’t work for all patients, so it would be helpful to have a way to easily monitor whether it’s working or not, Strano says.

“We are working on technology to make small sensors that could be implanted near the tumor itself, which can give an indication of how much drug is arriving at the tumor and whether it’s being metabolized. You could place a sensor near the tumor and verify from outside the body the efficacy of the drug in the actual tumor environment,” he says.

When temozolomide enters the body, it gets broken down into smaller compounds, including one known as AIC. The MIT team designed a sensor that could detect AIC, and showed that they could implant it as deep as 5.5 centimeters within an animal brain. They were able to read the signal from the sensor even through the animal’s skull.

Such sensors could also be designed to detect molecular signatures of tumor cell death, such as reaction oxygen species.

In addition to detecting TMZ activity, the researchers demonstrated that they could use WIFF to enhance the signal from a variety of other sensors, including carbon-nanotube-based sensors that Strano’s lab has previously developed to detect hydrogen peroxide, riboflavin, and ascorbic acid.

“The technique works at any wavelength, and it can be used for any fluorescent sensor,” Strano says. “Because you have so much more signal now, you can implant a sensor at depths into tissue that were not possible before.”

To help make fluorescent sensors easier to use in human patients, the researchers are working on sensors that are biologically resorbable, so they would not need to be surgically removed.

The research was funded by the Koch Institute for Integrative Cancer Research and Dana-Farber/Harvard Cancer Center Bridge Project. Additional funding was provided by the Swiss National Science Foundation, the Japan Society for the Promotion of Science, the King Abdullah University of Science and Technology, the Zuckerman STEM Leadership Program, the Israeli Science Foundation, and the Arnold and Mabel Beckman Foundation.”