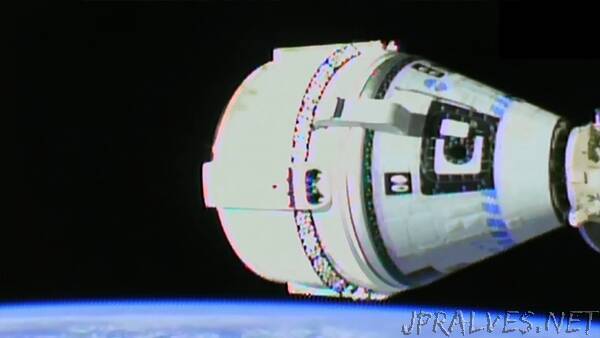 “Boeing’s [NYSE: BA] CST-100 Starliner spacecraft made its first connection to the International Space Station at 7:28 p.m. Central Time (0028 UTC) today to complete a primary goal of the program’s Orbital Flight Test-2 (OFT-2). With no astronauts on board, Starliner’s autonomous systems and ground controllers in Houston guided the vehicle through a carefully choreographed series of maneuvers to steadily bring the Starliner closer to the orbiting laboratory before docking. Astronauts aboard the space station monitored Starliner throughout the flight and at times commanded the spacecraft to verify control capabilities.

“Today’s successful docking of the Starliner is another important step in this rehearsal for sending astronauts into orbit safely and reliably,” said Boeing Defense, Space & Security President and CEO Ted Colbert.

Launching atop a human-rated United Launch Alliance Atlas V rocket on May 19, 2022, from Cape Canaveral Space Force Station in Florida, Starliner spent its first hours in space performing a series of system demonstrations allowing mission managers to verify the spacecraft was healthy and able to maneuver safely. After docking, the Starliner recharged its batteries using solar arrays located on the service module.

After astronauts aboard the station declared “Tally-ho, Starliner,” the vehicle connected to a Boeing-built docking port on the International Space Station.

Equipped with a fully functional life support system, as well as all of the other critical systems to support humans, the spacecraft and mission are designed to give Boeing and NASA enough data to certify the spacecraft for long-duration crewed missions to the International Space Station.

During the Starliner’s docked time on orbit, the crew of the station will float inside the spacecraft, conduct an initial cabin tour, and periodically perform system checkouts while ground controllers evaluate data gathered during its flight.”