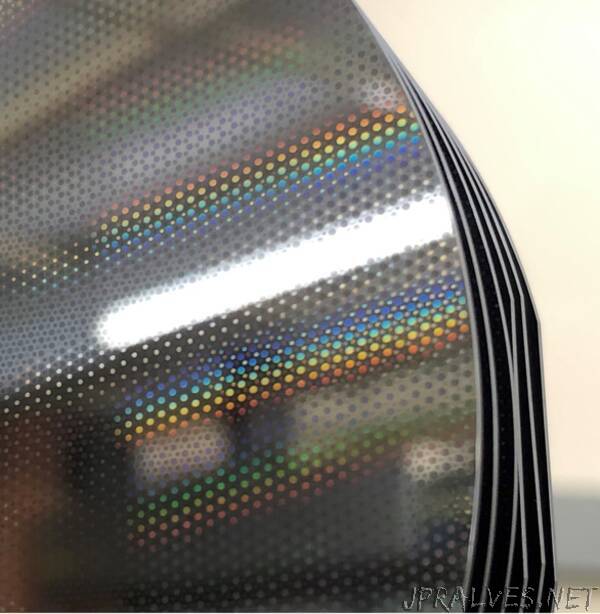 “A novel photolithography technique could be a manufacturing game-changer for optical applications.

Technologies that depend on lightweight, high-precision optical systems, like space telescopes, X-ray mirrors, and display panels, have developed significantly over the past several decades, but more advanced progress has been limited by seemingly simple challenges. For example, the surfaces of mirrors and plates with microstructures that are necessary in these optical systems can be distorted by stressed surface coating materials, degrading optics quality. This is especially true for ultra-lightweight optical systems, such as space optics, where traditional optical fabrication methods struggle to meet exacting shape requirements.

In a paper appearing in the April 20 issue of Optica, Yao, a research scientist and the paper’s lead author, explains their new approach to reshaping thin plate materials in a way that eliminates distortion and enables researchers to bend surfaces more arbitrarily into the precise and complex shapes they might need. Thin plate shaping is typically used for high-level, complex systems, like deformable mirrors or wafer-flattening processes during semiconductor manufacturing, but this innovation means future production will be more precise, scalable, and cheap. Yao and the rest of the team imagine that these thinner and more easily deformable surfaces can be useful in broader applications, like augmented reality headsets and larger telescopes that can be sent into space at lower cost. “Using stress to deform optical or semiconductor surfaces is not new, but by applying modern lithographic technology, we can overcome many of the challenges of existing methods,” says Yao.

The team’s work builds on the research of Brandon Chalifoux, who is now an assistant professor at the University of Arizona. Chalifoux worked with the team on earlier papers to develop a mathematical formalism to connect surface stress states with deformations of thin plates, as part of his doctorate in mechanical engineering.

In this new approach, Yao has developed a novel arrangement of stress patterns for precisely controlling general stress. Substrates for optical surfaces are first coated on the backside with thin layers of high-stress film, made of materials like silicon dioxide. Novel stress patterns are lithographically printed into the film so that researchers can change the properties of the material in specific areas. Selectively treating the film coating in different areas controls where stress and tension is applied across the surface. And because the optical surface and the coating are adhered together, manipulating the coating material also reshapes the optical surface accordingly.

“You’re not adding stress to make a shape, you’re selectively removing stress in specific directions with carefully designed geometric structures, like dots or lines,” says Schattenburg, senior research scientist and director of the Space Nanotechnology Laboratory. “That’s just a certain way to give a target stress relief at a single place in the mirror which can then bend the material.”

An idea from correcting space mirrors

Since 2017, the SNL team has worked with NASA Goddard Space Flight Center (GSFC) to develop a process to correct the shape distortion of X-ray telescope mirrors caused by coating stress. The research originated from a project of building X-ray mirrors for NASA’s Lynx next-generation X-ray telescope mission concept, which requires tens of thousands of high-precision mirrors. Due to the task of focusing X-rays, the mirrors must be very thin to gather X-rays efficiently. However, mirrors lose stiffness rapidly as they are thinned, becoming easily distorted by the stress from their reflective coatings — a nanometers-thick iridium layer coated on the front side for the purpose of reflecting X-rays.

“My team at GSFC has been making and coating thin X-ray mirrors since 2001,” says William Zhang, X-ray optics group leader at GSFC. “As the quality of X-ray mirrors has improved continually in the last several decades following technological advancements, distortion caused by coatings has become an increasingly serious problem.” Yao and his team developed a lithographic stress patterning method, successfully combining several different techniques, to achieve excellent removal of distortion when applied to X-ray mirrors made by the group.

After this initial success, the team decided to extend the process to more general applications, such as free-form shaping of mirrors and thin substrates, but they met a major obstacle. “Unfortunately, the process developed for GSFC can only precisely control a single type of surface stress, the so-called ‘equibiaxial,’ or rotationally uniform, stress,” says Chalifoux. “Equibiaxial stress states can only achieve bowl-like local bending of the surface, which cannot correct potato-chip or saddle shape distortions. To achieve arbitrary control of surface bending requires control of all three terms in the so-called ‘surface stress tensor.’”

To achieve full control of the stress tensor, Yao and his team further developed the technology, eventually inventing what they call stress tensor mesostructures (STMs), which are quasi-periodic cells arrayed on the back surface of thin substrates, composed of gratings superimposed on stressed coatings. “By rotating the grating’s orientation in each unit cell and changing the area fraction of selected areas, all three components of the stress tensor field can be controlled concurrently with a simple patterning process,” explains Yao.

The team spent more than two years developing this concept. “We encountered a series of difficulties in the process,” Schattenburg says. “Free-form shaping of silicon wafers with nanometer precision requires a synergy of metrology, mechanics, and fabrication. By combining the lab’s decades of experience in surface metrology and microfabrication with graduate-student-developed thin plate modelling and optimization tools, we were able to demonstrate a general substrate shape control method that is not limited to only bowl-like surface bending.”

A promising technique for many applications

This approach enabled the team to imagine new applications beyond the initial task of correcting coating-distorted X-ray mirrors. “When forming thin plates using traditional methods, it is difficult to be precise because most of the methods generate parasitic or residual stresses which lead to secondary distortion and spring-back after processing,” says Jian Cao, a professor of mechanical engineering at Northwestern University, who was not involved with the work. “But the STM stress-bending method is quite stable, which is especially useful for optics-related applications.”

Yao and his colleagues are also expecting to control stress tensors dynamically in the future. “Piezoelectric actuation of thin mirrors, which is used in adaptive optics technology, has been under development for many years, but most methods can only control one component of the stress,” Yao explains. “If we can pattern STMs on thin, piezo-actuated plates, we would be able to extend these techniques beyond optics to interesting applications such as actuation on microelectronics and soft robotics.”

This work was funded by NASA.”