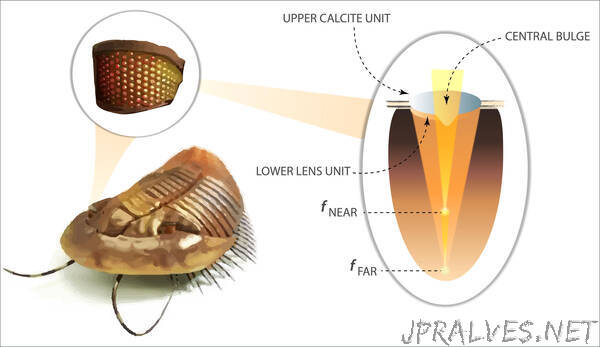 “Drawing lessons from the compound eyes of trilobites, NIST researchers fabricate tiny lenses that see both near and far.

Five hundred million years ago, the oceans teemed with trillions of trilobites — creatures that were distant cousins of horseshoe crabs. All trilobites had a wide range of vision, thanks to compound eyes — single eyes composed of tens to thousands of tiny independent units, each with their own cornea, lens and light-sensitive cells. But one group, Dalmanitina socialis, was exceptionally farsighted. Their bifocal eyes, each mounted on stalks and composed of two lenses that bent light at different angles, enabled these sea creatures to simultaneously view prey floating nearby as well as distant enemies approaching from more than a kilometer away.

Inspired by the eyes of D. socialis, researchers at the National Institute of Standards and Technology (NIST) have developed a miniature camera featuring a bifocal lens with a record-setting depth of field — the distance over which the camera can produce sharp images in a single photo. The camera can simultaneously image objects as close as 3 centimeters and as far away as 1.7 kilometers. They devised a computer algorithm to correct for aberrations, sharpen objects at intermediate distances between these near and far focal lengths and generate a final all-in-focus image covering this enormous depth of field.

Such lightweight, large-depth-of-field cameras, which integrate photonic technology at the nanometer scale with software-driven photography, promise to revolutionize future high-resolution imaging systems. In particular, the cameras would greatly boost the capacity to produce highly detailed images of cityscapes, groups of organisms that occupy a large field of view and other photographic applications in which both near and far objects must be brought into sharp focus.

NIST researchers Amit Agrawal and Henri Lezec, along with their colleagues from the University of Maryland in College Park and Nanjing University, describe their work online in the April 19 issue of Nature Communications.

The researchers fabricated an array of tiny lenses known as metalenses. These are ultrathin films etched or imprinted with groupings of nanoscale pillars tailored to manipulate light in specific ways. To design their metalenses, Agrawal and his colleagues studded a flat surface of glass with millions of tiny, rectangular nanometer-scale pillars. The shape and orientation of the constituent nanopillars focused light in such a way that the metasurface simultaneously acted as a macro lens (for close-up objects) and a telephoto lens (for distant ones).

The nanopillars bent the left and right circularly polarized light by different amounts, depending on the orientation of the nanopillars. The team arranged the nanopillars, which were rectangular, so that some of the incoming light had to travel through the longer part of the rectangle and some through the shorter part. In the longer path, light had to pass through more material and therefore experienced more bending. For the shorter path, the light had less material to travel though and therefore less bending.

Light that is bent by different amounts is brought to a different focus. The greater the bending, the closer the light is focused. In this way, depending on whether light traveled through the longer or shorter part of the rectangular nanopillars, the metalens produces images of both distant objects (1.7 kilometers away) and nearby ones (a few centimeters).

Without further processing, however, that would leave objects at intermediate distances (several meters from the camera) unfocused. Agrawal and his colleagues used a neural network — a computer algorithm that mimics the human nervous system — to teach software to recognize and correct for defects such as blurriness and color aberration in the objects that resided midway between the near and far focus of the metalens. The team tested its camera by placing objects of various colors, shapes and sizes at different distances in a scene of interest and applying software correction to generate a final image that was focused and free of aberrations over the entire kilometer range of depth of field.

The metalenses developed by the team boost light-gathering ability without sacrificing image resolution. In addition, because the system automatically corrects for aberrations, it has a high tolerance for error, enabling researchers to use simple, easy to fabricate designs for the miniature lenses, Agrawal said.