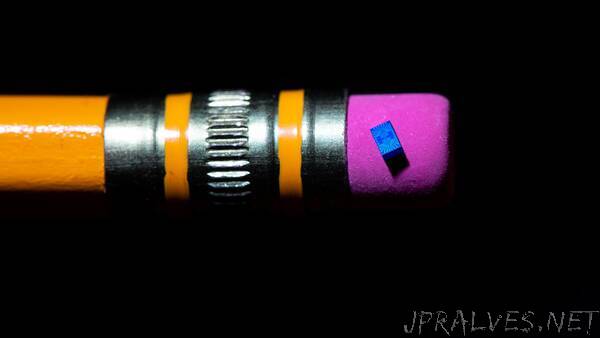 “The new building blocks of the quantum computer of the future are being produced in a present-day chip factory. Researchers from QuTech — a TU Delft and TNO collaboration — and Intel showed that this is possible. They achieved this major technological feat through close collaboration and extensive knowledge sharing, and cracked open the champagne in an online toast to this milestone.

At first glance, the Intel buildings near the American city of Portland seem pretty bland, looking like enormous grey shoe boxes that serve as distribution centres for packages or foodstuffs. Not a place where you’d expect to find groundbreaking technological research taking place. Yet that’s precisely what’s going on within these grey walls. Here Intel not only makes the chips that make your smartphone and laptop work, they are also developing the building blocks of the quantum computer: the computer of the future. And they’re doing it together with QuTech.

The Dutch and American researchers have had a joint mission in recent years — to print qubits on silicon using current technology. These qubits are the building blocks of the quantum computer, which in the future will enable us to do calculations at a much faster rate. “At present, researchers are mainly working with qubits in laboratories. To make the quantum computer possible, you need to produce these qubits in an accessible way. By working with Intel we wanted to show that we can use current chip production methods to print qubits too. This brings the advent of the quantum computer an important step closer, as you can work with existing facilities,” says QuTech’s Anne-Marie Zwerver, who started work on this together with her colleague Tobias Krähenmann.

Different modes of working
“For the last 20 years people have been saying that it is possible to make qubits in silicon this way using current chip manufacturing processes. But this was only an assumption”, says Tobias. So how do you show that it really can be done? To achieve this they needed to merge scientific knowledge with practical research, allowing the researchers to combine QuTech’s scientific knowledge about qubits with Intel’s practical knowledge and facilities.

For a full five years the scientists from QuTech and the researchers at Intel worked together to achieve their goal. This called for the alignment of two very different worlds. “Our objective of getting a qubit onto silicon meant that we had to work to an extreme level of precision. For Intel the novelty was to put various electrodes alongside each other on such a small scale and in two layers,” adds Anne-Marije.

There were other differences in methodology and approach between the academic world and the giant chip manufacturer too. “Intel works in a very structured and systematic manner. We, on the other hand, dig deeper into precisely how everything works,” Tobias explains. “In our research we often encounter something very interesting, and then we want to understand why it works like that. We want to figure out the physics. Our focus is on how things work and on where the limits lie. Intel develops new technology that we will be using in the future, and their main focus is to ensure that it works.”

Quite a feat
That meant that sometimes the two sides needed to send out feelers and communicate very clearly, to get all the researchers on the same page and to make the goal of isolating a qubit on silicon achievable. Anne-Marije and Tobias were already used to the idea that researchers may have slightly different approaches. They have both been enthralled by the quantum computer for many years, but their approach to it also differs. Anne-Marije: “I heard about quantum mechanics when I was sixteen years old, and since then I have been smitten. I find it quite magical that particles are able to get entangled. I’d love to know how this works, but right now no-one knows exactly how.”

Tobias shares this interest with her. “As a child I used to drive my mother crazy always asking ‘why’. Only my approach is more hands-on than Anne-Marije, who looks at things more conceptually. I used to take toys apart, for example. I didn’t always get them back together again, but I wanted to know what parts a toy was made of. In our work Anne-Marije and I complement each other, as we share the fascination but each have a different approach.”

These complementary qualities of Tobias, Anne-Marije, Intel and QuTech were not a limitation, but in fact the key to success. Combining their various approaches and experiences enabled them to isolate a qubit on silicon. This was quite a feat, and one that they could only achieve through the combination of science and practice. This achievement has brought us a significant step closer to the quantum computer.

“We make the qubits in two steps,” Anne-Marije explains. “We first create what is called a quantum dot: a kind of box in which we capture an electron. We define this box using electrical voltages that we apply to electrodes. The second step is to make and manipulate qubits using this quantum dot. By making them this way, the qubits resemble the computer chips that are produced on a large scale today.”

And so a brand new technology is being produced in the unassuming, grey Intel building! The Covid-19 pandemic meant that Anne-Marije and Tobias could only visit Intel once or twice. “It looks a bit like a university campus,” says Anne-Marije. “Except that it’s a bit more mysterious. And there’s a huge amount of security. I was even accompanied to the toilet by a security guard. You’re not allowed to take photos either. It’s a pity we didn’t get to go there more often, but fortunately our long-distance collaboration went smoothly. We held online meetings and exchanged samples of what we were making. Once we had succeeded, they sent a bottle of champagne to our office and we drank a toast together via a video link.””