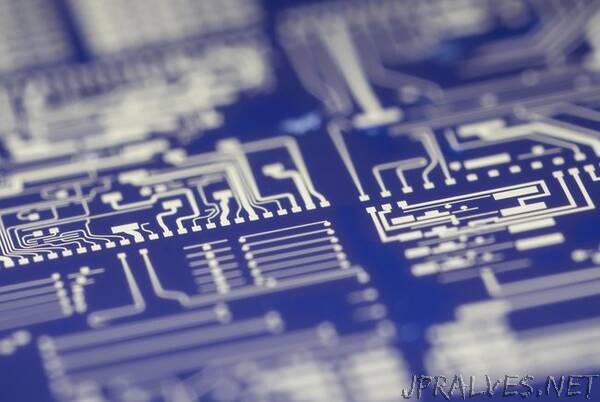 Faster, more energy-efficient ICT, or sensors to detect anything between beginning fruit rot and microscopic cracks in glass fibers: photonic technology holds great promises for the future. To deliver on those promises, a European consortium led by TU/e researchers takes the next step. The INSPIRE project uses a novel printing method to enable mass fabrication of hybrid photonic chips. These combine multiple technologies to create new possibilities for applications.

Over the past decades, a myriad of technologies has been developed to produce minuscule devices that generate, detect, process and transport light. Applications of these photonic chips range from sensors for monitoring food quality to components that enable efficient broadband data communication.

“Basically, current photonic chips come mostly in three flavors,” lectures Martijn Heck, Professor of Photonic Integration and coordinator of the INSPIRE-project. “They are either based on silicon, silicon nitride, or indium phosphide. At TU/e we are experts in the latter.”

Each of the currently used photonic materials comes with their own pros and cons. Silicon, and especially silicon nitride, can be used to transport light on the chip with low losses. And as the material forms the basis under the current semiconductor industry, silicon-based chips can be produced with existing semiconductor fabrication techniques.

However, silicon has one major disadvantage: it cannot generate light. So if you need a laser, you will have to turn to some other material. And that is where indium phosphide comes in.

Toward viable industrial production process
Heck: “In indium phosphide we are able to make active components such as lasers and amplifiers, whereas silicon nitride based photonics is way more efficient in guiding the light. For many applications, an optimal device would thus consist of both materials.”

Technically, it is already possible to place indium phosphide devices on top of silicon based waveguides. However, the current process is not suitable for volume manufacturing, says Luc Augustin, CTO of SMART photonics, a foundry involved in the project.

“Both indium phosphide and silicon nitride wafers can be produced at high volumes, where each wafer contains thousands of photonic devices. But when we want to put both materials together, we have to do that chip by chip. That might work fine in a lab setting, but it is nowhere near a viable production process for industry.”

The INSPIRE project aims to solve that problem and combine multiple materials in a scalable, robust and cost-efficient way. Heck: “In this project, we bring together three separate, mature technologies: we use micro-transfer printing, delivered by X-Celeprint, to print multiple indium phosphide devices made by SMART photonics on top of silicon nitride wafers produced at imec.”

“The printing technique has already been demonstrated to work on a single device level in the lab. With this project we want to investigate the possibilities to scale up and print entire columns of devices at once,’ adds INSPIRE lead scientist Yuqing Jiao.

How to bake a layered cake
The recipe is as follows: a silicon nitride wafer containing the passive components of the ultimate chip is produced with an extremely flat and clean top layer. For the indium phosphide, first a so-called release layer of material is grown. This is topped with the indium phosphide layer containing the active components such as lasers, optical amplifiers or photodetectors.

The release layer underneath is then etched away, leaving behind a series of very small anchors that hold the separate devices in place. Then the thin indium phosphide coupon is picked up, the anchors are broken, and the indium phosphide as a whole is essentially stamped on top of the silicon nitride. As long as the interface between the two layers is smooth enough, an ultrathin layer of adhesive is enough to permanently attach the coupon to the wafer.

“Since the release layer is made out of material that we already use in our fabrication processes, this layer will not impact the device performance and fabrication,” says Augustin from SMART Photonics. “The challenging part will be to get the etching part right, to make sure that we indeed transfer all of the individual devices from the wafer and retain their full functionality.”

Jiao adds: “Another challenge is to find a smart way to precisely position the ‘stamps’. We need the indium phosphide devices to be placed on top of their silicon nitride counterparts with an accuracy of less than one micrometer per device. And ultimately, we need to achieve such precision for tens of thousands of devices at once.”

Three use cases
To demonstrate the power of the resulting hybrid technology, within the project three dedicated use cases will be explored. The first is a distributed fiber sensing readout, proposed by project partner Thales. They are in need for a system that can detect failures in large structures such as buildings and bridges with the aid of optical fibers.

This technology offers continuous, real time and precision measurements of structural changes across the entire structure, even into the areas not accessible to human operators. Jiao explains: “A laser pulse is sent into the fiber. Whenever there is a failure in the structure, this translates into a failure in the fiber, for example a twist or a fracture.”

“As a result of this, reflections will occur. Depending on the location and nature of the failure, the intensity and the phase of the reflected light will change. By analyzing these reflections, one can determine what has happened and where.”

This envisioned application is very demanding in terms of technical specifications, adds Heck. “To do this properly with integrated photonics, we will need a very low-noise laser. Moreover, since the signals we want to measure will not have a very high intensity, we also need to achieve low noise and high resolution detection. It is exactly this combination of requirements where hybrid technology can make a difference.”

“In the INSPIRE project, we are building a pulse generator that encodes the information from the wireless signal in a microwave photonic signal to be fed into the fibers. This technology is for example very useful for military radar applications. Since you don’t have to carry the signal through the air, loss of power is reduced, and the connection is harder to hack by enemies.”

The third use case, an optical switch to reduce the energy consumption of data centers, explored together with Cambridge University, is a more traditional one from a photonics perspective, comments Augustin. “Current datacenters are all photonic. Datacenters and telecom currently comprise some eighty percent or our market.”

The challenge there is to come up with new designs for all-optical switches that can simultaneously switch massive amounts of data, says Heck. “We have to switch many inputs with many outputs, and with low losses. In practice that means we have to deal with a myriad of crossing waveguides and switches based on active elements where we need to prevent thermal crosstalk.”

“Since the aim is a fully integrated device with only one interface for fiber inputs and one for outputs, we need to find ways to integrate hundreds of optical amplifiers, phase modulators and wave guide splitters on a single chip, while dealing with the heat they will generate,” adds Jiao.

New opportunities
On top of these three use cases, Jiao and Heck are also contemplating a fourth: optical quantum processors. Heck: “Though more of a niche market, applications such as single photon sources or detectors for quantum technology could certainly make for an interesting use case. It would be great if we could establish indium phosphide as a platform technology for quantum communication or even quantum computation. That would also fit nicely with the mission of our recently established Eindhoven Hendrik Casimir Institute, to bring together electronics, photonics and quantum technology.”

Also, Augustin is already thinking beyond the project. “INSPIRE is the next step in photonic integration. All over the world, people are looking for ways to combine different materials into a single chip to add new functionalities. The printing technique explored in this project is a unique and very promising new direction to do this.”

“As SMART Photonics, we develop generic technologies. If we can demonstrate that this printing technique enables the large-scale production of hybrid chips, that would open up a lot of new opportunities to explore new markets. For example, if we can print one photonic material on top of the other, we can probably also print photonics on top of electronics, or on top of microfluidics for biosensors. Though the INSPIRE project is of a rather exploratory nature and the targets are very ambitious, our consortium comprises all of the necessary players to make this a success.”