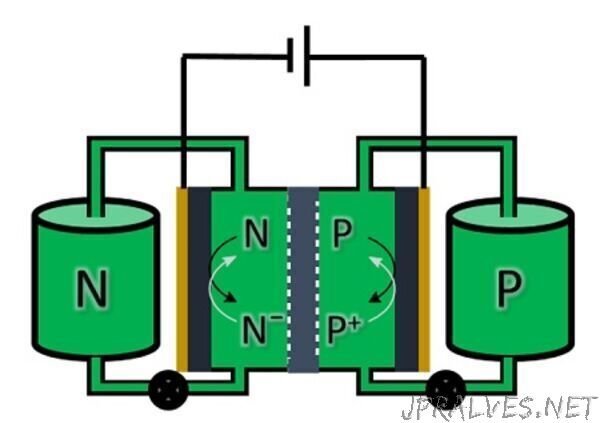 “The intermittent supply of green electricity requires large-scale storage to keep our power grids stable. Since normal batteries do not scale very well, the idea of using flow batteries, which store electricity in a fluid is attractive. However, these batteries contain rare metals and are expensive. Scientists at the University of Groningen, the Netherlands, have designed a flow battery electrolyte that may solve both problems. Their results were published in the Journal of the American Chemical Society on 8 March.

Flow batteries are not very different from the everyday batteries that we use. The big difference is that the energy is stored in two separate fluids with dissolved chemicals for charge storage. Electricity is stored (and later released) by pumping these fluids through an electrochemical cell that contains a membrane through which ions can be exchanged. The energy content of such a battery is scalable by simply using larger storage tanks for the fluids.

Expensive
China recently installed flow batteries to reduce the variability in green electricity production. ‘Large-scale storage capacity is needed when intermittent sources, such as solar and wind energy, become more prominent in the electricity mix, because the grid might get destabilized,’ says Edwin Otten, Associate Professor of Molecular Inorganic Chemistry at the University of Groningen. ‘The type of battery that the Chinese use was designed in the1980s and is based on a solution containing vanadium.’

This metal is only mined in a few places on Earth. ‘This means that the supply cannot always be guaranteed and it is rather expensive,’ Otten explains. Furthermore, it requires a special membrane to separate the two fluids, which also adds to the costs. That is why Otten’s research group, together with colleagues from the University of Eindhoven (the Netherlands) and the Technical University of Denmark, set out to design a new kind of flow battery material.

Blatter radical
‘We wanted a symmetrical battery where both tanks contain the same fluid,’ says Otten. ‘Also, we wanted it to be based on an organic molecule rather than on a metal’. Both sides of the flow battery generally hold fluids with a different composition. Symmetrical batteries have been designed by linking the molecules that are used on both sides together and filling both tanks with the resulting hybrid molecule. ‘The drawback of this approach is that only one part of the molecule is used on either side. And, during use, reactive radicals appear that degrade over time. This makes stability a problem.’

Otten and his team used a different approach. They looked for a single molecule that is stable and that can accept or donate electrons and could, therefore, be used on both sides of the battery. The most promising compound was a Blatter radical, a bipolar organic compound that can either accept or donate an electron in a redox reaction. ‘The molecule that we selected was also intrinsically stable,’ says Otten.

They tested the compound in a small electrochemical cell. It worked well and remained stable over 275 charge/discharge cycles. ‘We need to bring this up to thousands of cycles; however, our experiments are a proof of concept. It is possible to make a symmetrical flow battery that has good stability.’ The organic Blatter radical is relatively easy to make and although it is currently not produced in industry, scale-up should be possible.

Imbalance
‘Another advantage of our symmetrical design is that it is not a big problem if some of our compound crosses the membrane during use,’ explains Otten. ‘This could result in a slightly higher volume in one of the tanks but any imbalance is easily restored by simply reversing the polarity.’ During their tests, they have shown that this indeed works as predicted. Other experimental designs of symmetrical batteries were not stable enough to get the number of cycles needed to prove this.

The next step is to create a water-soluble version of the Blatter radicals. Most flow cells are designed for water-based fluids, since water is cheap and not flammable. ‘PhD students in my group are already working on this.’ A further step is to increase the stability and solubility of the Blatter radical and test it on a larger scale. Otten: ‘The crucial test is to see whether our compounds will be stable enough for commercial applications.’