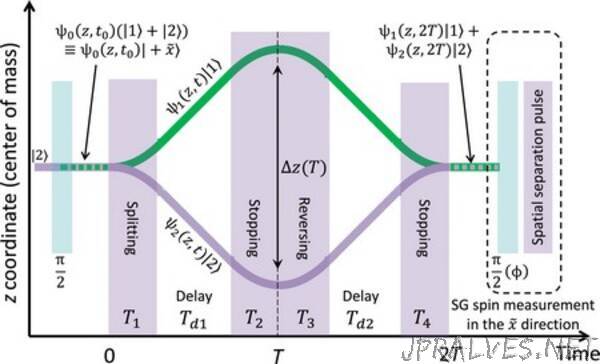 “Physicists in Israel have created a quantum interferometer on an atom chip. This device can be used to explore the fundamentals of quantum theory by studying the interference pattern between two beams of atoms. University of Groningen physicist, Anupam Mazumdar, describes how the device could be adapted to use mesoscopic particles instead of atoms. This modification would allow for expanded applications. A description of the device, and theoretical considerations concerning its application by Mazumdar, were published on 28 May in the journal Science Advances.

The device which scientists from the Ben-Gurion University of the Negev created is a so-called Stern Gerlach Interferometer, which was first proposed one hundred years ago by German physicists Otto Stern and Walter Gerlach. Their original aim of creating an interferometer with freely propagating atoms exposed to gradients from macroscopic magnets has not been practically realized until now. ‘Such experiments have been done using photons, but never with atoms’, explains Anupam Mazumdar, Professor of Theoretical Physics at the University of Groningen and one of the co-authors of the article in Science Advances.

Diamonds
The Israeli scientists, led by Professor Ron Folman, created an interferometer on an atom chip, which can confine and/or manipulate atoms. A beam of rubidium atoms is levitated over the chip using magnets. Magnetic gradients are used to split the beam according to the spin values of the individual atoms. Spin is a magnetic moment that can have two values, either up or down. The spin-up and spin-down atoms are separated by a magnetic gradient. Subsequently, the two divergent beams are brought together again and recombined. The spin values are then measured, and an interference pattern is formed. Spin is a quantum phenomenon, and throughout this interferometer, the opposing spins are entangled. This makes the interferometer sensitive to other quantum phenomena.

Mazumdar was not involved in the construction of the chip, but he contributed theoretical insights to the paper. Together with a number of his colleagues, he previously proposed an experiment to determine whether gravity is in fact a quantum phenomenon using entangled mesoscopic objects, namely tiny diamonds that can be brought in a state of quantum superposition. ‘It would be possible to use these diamonds instead of the rubidium atoms on this interferometer’, he explains. However, this process would be highly complex as the device, which is currently operated at room temperature, would need to be cooled down to around 1 Kelvin for the mesoscopic experiment.

Free fall
If this is realized, two of these atom chips could free fall together (to neutralize external gravity), so that any interaction occurring between them would depend on the gravitational pull between the two chips. Mazumdar and his colleagues aim to determine whether quantum entanglement of the pair occurs during free fall, which would mean that the force of the gravity between the diamonds is indeed a quantum phenomenon. Another application of this experiment is detection of gravity waves; their deformation of space-time should be visible in the interference pattern.

The actual implementation of this experiment is still a long way off, but Mazumdar is very excited now that the interferometer has been created. ‘It is already a quantum sensor, although we still have to work out exactly what it can detect. The experiment is like the first steps of a baby – now, we have to guide it to reach maturity.’