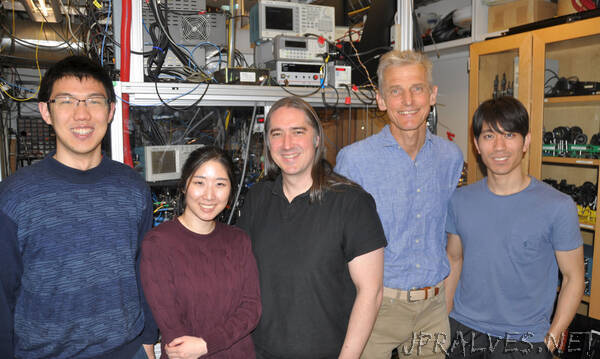 “Physicists in the MIT-Harvard Center for Ultracold Atoms (CUA) have developed a new approach to control the outcome of chemical reactions. This is traditionally done using temperature and chemical catalysts, or more recently with external fields (electric or magnetic fields, or laser beams).

MIT CUA physicists have now added a new twist to this: They have used minute changes in a magnetic field to make subtle changes to the quantum mechanical wavefunction of the colliding particles during the chemical reaction. They show how this technique can steer reactions to a different outcome: enhancing or suppressing reactions.

This was only possible by working at ultralow temperatures at a millionth of a degree above absolute zero, where collisions and chemical reactions occur in single quantum states. Their research was published in Science on March 4.

MIT CUA researchers prepared an ultracold cloud with a mixture of sodium atoms and the diatomic sodium-lithium molecule in a specific quantum state where all the magnetic moments (or spin) of the electrons were aligned by a strong magnetic field.

The presence of chemical reactions was observed from the decay of the number of remaining molecules. When the researchers varied the magnetic field, they found dramatic changes in the rate of reactive scattering in a way that had not been observed before. The reaction rate changed due to a resonance between two quantum states of colliding particles, called a Feshbach resonance.

Wolfgang Ketterle, the John D. MacArthur professor of physics at MIT and leader of the MIT CUA team, explains: “More than 20 years ago, my group observed the first Feshbach resonances in Bose-Einstein condensates, an extreme, cold form of atomic matter. It is amazing to see that this phenomenon can now be used to control chemistry!”

The key element are changes to the phase of the wavefunction of the atoms and molecules when they collide. Collisions at ultralow temperature can involve multiple bounces back and forth. Quantum interference occurs between the effects of these bounces, which can be constructive or destructive (depending on the phase of the wavefunction), and enhances or suppresses reactions by factors of about 100.

Hyungmok Son, a former graduate student with CUA and the lead author of the study, says “the quantum interference is analogous to the interference of light in an optical cavity, or a laser beam bouncing between two mirrors.” Son could explain all the observations using a few simple equations that were based on this optical analogy. “This analysis gave us microscopic information about the reactive scattering process, which could not be obtained just from calculations,” adds Son.

“Right now, we are studying simple systems — a diatomic molecule and an atom, because larger molecules would be much more difficult to control and describe. The long-term goal of our research is to improve our understanding of how chemical processes can be controlled in more general systems and environments,” adds Ketterle.

The paper was co-authored by Son, Ketterle, MIT graduate students Juliana Park and Yukun Lu, former postdoc Professor Alan Jamison of the University of Waterloo, and Professor Tijs Karman of Radboud University in Nijmegen, Netherlands. All except Karman are or have been researchers in the MIT-Harvard Center for Ultracold Atoms. The MIT team is affiliated with the MIT Department of Physics and the Research Laboratory of Electronics (RLE).

This research was funded, in part, by the National Science Foundation, the U.S. Department of Defense, and the Samsung Scholarship.”