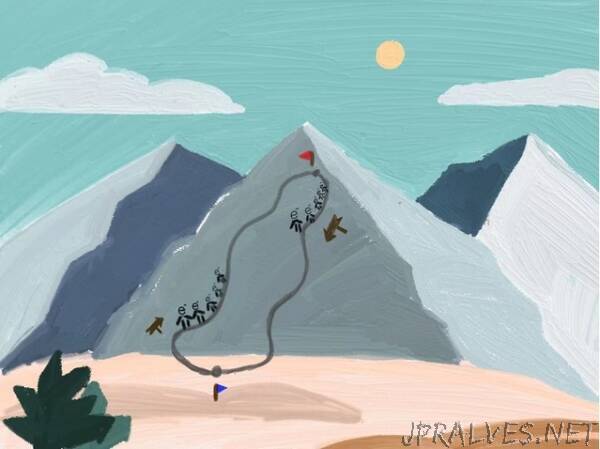 When temperature changes, many materials undergo a phase transition, such as liquid water to ice, or a metal to a superconductor. Sometimes, a so-called hysteresis loop accompanies such a phase change, so that the transition temperatures are different depending on whether the material is cooled down or warmed up.

In a new paper in Physical Review Letters, a global research team led by MIT physics professor Nuh Gedik discovered an unusual hysteretic transition in a layered compound called EuTe4, where the hysteresis covers a giant temperature range of over 400 kelvins. This large thermal span not only breaks the record among crystalline solids, but also promises to introduce a new type of transition in materials that possess a layered structure. These findings would create a new platform for fundamental research on hysteretic behavior in solids over extreme temperature ranges. In addition, the many metastable states residing inside the giant hysteresis loop offer ample opportunities for scientists to exquisitely control the electrical property of the material, which can find application in next-generation electrical switches or nonvolatile memory, a type of computer memory that retains data when powered off.

Researchers include postdoc Baiqing Lyu and graduate student Alfred Zong PhD ’20 from the Gedik lab, as well as 26 others from 14 institutions across the globe. The experimental works performed in this paper made use of state-of-the-art synchrotron facilities in the United States and China, where brilliant light sources are generated by fast-moving charged particles in a kilometer-long circular track, and the intense light is focused onto EuTe4 to unveil its internal structure. Gedik and his group also collaborated with a team of theorists including Professor Boris Fine and A. V. Rozhkov from Germany and Russia, both of whom helped to integrate many pieces of the puzzle in experimental observations into a consistent picture.

Hysteresis is a phenomenon where the response of a material to a perturbation, such as a temperature change, depends on the history of the material. A hysteresis indicates that the system is trapped in some local but not global minimum in the energy landscape. In crystalline solids characterized by long-range order, that is, where there is a periodic pattern of an atomic arrangement over the entire crystal, hysteresis typically occurs over a fairly narrow temperature range, from a few to tens of kelvins in most cases.

“In EuTe4, we instead found an extremely wide temperature range for the hysteresis over 400 kelvins,” says Lyu. “The actual number could be much larger, as this value is limited by the capabilities of current experimental techniques. This finding immediately caught our attention, and our combined experimental and theoretical characterization of EuTe4 challenges conventional wisdom on the type of hysteretic transitions that can occur in crystals.”

One manifestation of the hysteretic behavior is in the electrical resistance of the material. By cooling down or warming up crystals of EuTe4, the researchers were able to vary their electrical resistivity by orders of magnitude.

The researchers also found several oddities in the hysteresis. For example, unlike other phase transitions in crystals, they did not observe any modification in the electronic or lattice structure across the large temperature range. “The absence of microscopic change looks really peculiar to us,” adds Lyu, “Adding to the mystery, unlike other hysteretic transitions that sensitively depend on the rate of cooling or warming, the hysteresis loop of EuTe4 appears unaffected by this factor.”

One clue to the researchers is the way electrons are arranged in EuTe4. “At room temperature, electrons in a EuTe4 crystal spontaneously condense into regions with low and high densities, forming a secondary electronic crystal on top of the original periodic lattice,” explains Zong. “We believe the oddities associated with the giant hysteresis loop may be related to this secondary electronic crystal, where different layers of this compound exhibit disordered movement while establishing the long-range periodicity.”

“The layered nature of EuTe4 is crucial in this explanation of the hysteresis,” says Lyu.“The weak interaction between the secondary crystals in different layers enables them to move relative to each other, hence creating many metastable configurations in the hysteresis loop.”

The next step is to devise ways, other than changing the temperature, to induce these metastable states in EuTe4. This will enable scientists to manipulate its electrical properties in technologically useful ways.

“We can produce intense laser pulses shorter than one-millionth of one-millionth of a second,” says Gedik. “The next goal is to trick EuTe4 into a different resistive state after shining a single flash of light, making it an ultrafast electrical switch that can be used, for instance, in computing devices.”