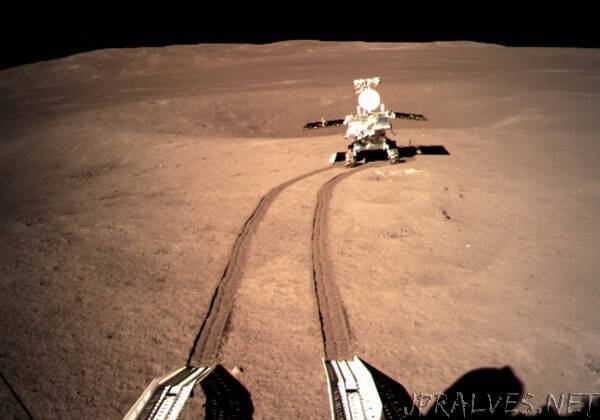 “The dirt tends to get stuck to the rover’s wheels in clods, but hasn’t hindered the rover yet.

The farside of the Moon is a far different place from the nearside. It has a more rugged surface, chock-full of craters. It’s nearly devoid of the smooth, solidified-lava oceans that dot the side that faces us. And it has a different composition, with fewer radioactive elements.

Now, you can add “stickier soil” to that list.

In a paper published Jan. 19 in Science Robotics, Chinese researchers give an update on the Yutu-2 rover, which touched down on the Moon in 2019 with Chang’e 4, the first ever mission to land on the lunar farside.

The team says that one of the most striking things Yutu-2 has encountered is how clumpy, or “cloddy,” the lunar soil has been. Images taken by the Chang’e 4 lander and the rover of its wheels show that much of its fine metal mesh is covered in dirt that it has picked up as it rolled across the lunar surface.

That might seem a small detail, but it’s scientifically intriguing: It stands in sharp contrast to the experience of Yutu-2’s predecessor, Yutu, which landed on the nearside in 2013. Though both rovers have nearly identical designs, the original Yutu never had any large clumps of dirt gather on its wheels in over 2.5 years of exploration — only some fine dust stuck to the metal wheels thanks to static cling.

The researchers write that this difference in soil is likely related to the conditions on the lunar farside. Though scientists haven’t settled exactly why, volcanic activity on the farside appears to have ceased earlier than on the nearside, meaning the surface of the farside is older than the nearside.

When lunar soil — called regolith — is exposed to the harsh conditions of space for millions of years, it absorbs repeated impacts from micrometeorites, a process called space weathering. These impacting particles don’t just pulverize the dirt into finer particles, they also melt them and fuse them into larger, irregular-shaped glassy globs, called agglutinates.

This, the Yutu-2 team says, is probably why the farside soil is so clumpy: Agglutinates’ irregular shapes are able to interlock with each other more easily, forming large clods. Because the farside’s lunar surface is older and more weathered, it makes sense that it has a higher level of agglutinates. But Yutu-2 is the first explorer — human or robotic — to tread on the regolith of the farside to find out.

Despite the dirt on its wheels, Yutu-2 is still roving the Moon, having passed the one 1-kilometer mark (0.62 mile) earlier this month. The milestone came shortly after it trekked to a curious rock that researchers had spotted in on the horizon in images. The mission team dubbed it a “mysterious hut” and others called it “moon cube”. It was, of course, just a rock, but one that, from up close, turned out to be rabbit-shaped, complete with a meal of carrots. It was a fitting coincidence, considering that “Yutu” means Jade Rabbit, the “rabbit in the Moon” of Chinese folklore.”