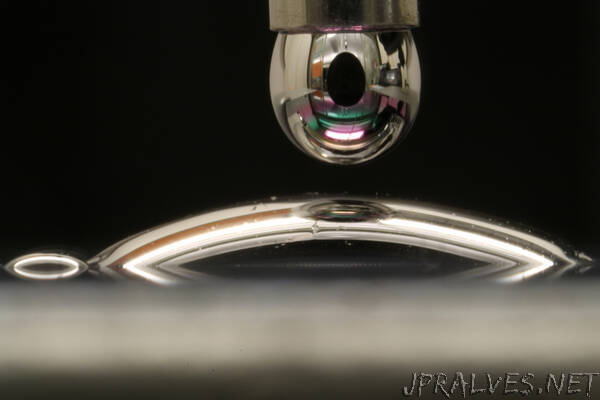 “Spread out or bead up? A new process enables control over liquid-solid interfaces even with the most unlikely pairs of materials.

The wettability of a surface — whether drops of water or another liquid bead up or spread out when they come into contact with it — is a crucial factor in a wide variety of commercial and industrial applications, such as how efficiently boilers and condensers work in power plants or how heat pipes funnel heat away in industrial processes. This characteristic has long been seen as a fixed property of a given pair of liquid and solid materials, but now MIT researchers have developed a way of making even the most unlikely pairings of materials take on a desired level of wettability.

The new process is described this week in the journal Proceedings of the National Academy of Sciences (PNAS), in a paper by MIT postdocs Kyle Wilke, Zhengmao Lu, and Youngsup Song and professor of mechanical engineering Evelyn Wang.

Wettability is usually closely linked to the surface tension properties of a liquid — the higher the surface tension, the more likely the liquid is to form beads on a surface rather than spreading out to wet the surface. Mercury has exceptionally high surface tension and is therefore considered highly nonwetting, and so the team chose this notoriously difficult liquid for one of their demonstrations. They were able to produce a surface, made from a typically nonwetting material, that caused mercury to spread across it without a chemical reaction, something never before demonstrated.

The new method is based on texturing the surface, regardless of its composition, with closely spaced indentations that have “reentrant openings” — that is, the opening at the top is narrower than the rest of the cavity, rather like a jar with a narrow mouth. This textured surface is pretreated with a liquid that fills all of these cavities, leaving exposed areas of liquid in these openings across the surface, which alter the surface’s properties. When another liquid is added, which depending on the application may be the same or different from the one preloaded into the surface, its response to the surface is changed from nonwetting to wetting.

The findings are so new there may be many real-world applications that the team hasn’t thought of yet, says Wilke: “That’s something that we’re really excited about starting to explore,” he says. But thermal management in various industrial processes is likely to be among the first practical uses. The way water or another working fluid spreads, or fails to spread, across condenser surfaces can have a major influence on the efficiency of many processes that involve evaporation and condensation, including electric power plants and chemical processing plants.

“We’ve now taken a nonwetting surface and made it wetting,” Wilke says. “People have previously done the opposite case, of taking something that’s wetting and making it nonwetting.” Thus, this new work opens the door to being able to exercise near-total control of wettability for different combinations of surface materials and liquids.

“We can now create surfaces that have most conceivable combinations of wettability,” Wilke says. “I think this can definitely open up some really intriguing applications that we’re looking to explore.”

One area that’s promising is in protective coatings. Many materials used to protect surfaces from harsh chemicals are fluorinated compounds that are strongly nonwetting, which may make them unsuitable for many applications. Making those surfaces wetting could open up many new potential uses for such coatings.

High-temperature heat pipes, used to conduct heat from one place to another, such as for cooling machinery or electronics, are another promising application. “A lot of those working fluids are liquid metal, and those are known to have very high surface tension,” Lu says. That drastically limits the choice of such fluids, and this new approach could open up possible material choices.

While the complex surface indentations for this research were fabricated using semiconductor manufacturing processes, the team is exploring other ways of achieving the same kind of texturing using 3D printing or some other process that could more easily be scaled up for real-world applications.

The team is also exploring variations in the sizes and shapes of these reentrant openings. For example, Lu says, while it’s the surface area and spacing of these openings that mostly determines their wettability behavior, their depth can influence how stable this behavior is, because deeper holes are more resistant to evaporation that could undermine the wettability improvements. “The distance to the bottom of the channel is a critical dimension that may affect the wetting behavior,” he says. Those variations are being explored in followup work.

By using mercury, Lu says, the team “chose our geometry set based on this most difficult case,” and were still able to demonstrate high wettability. “So, for less difficult combinations, you have more flexibility to choose probably easier to make geometries.”

“There are probably many industries that will benefit,” Wang says, “whether it’s a chemical processing industry or a water treatment industry or a thermal products industry.” One of the next steps the team will take, she says, is “talking with these various industries to identify where is the nearest-term opportunity.”

The work was supported by the National Science Foundation through the Center for Nanoscale systems, by the MIT and Masdar Institute Cooperative Program, and by the Air Force Office of Scientific Research.”