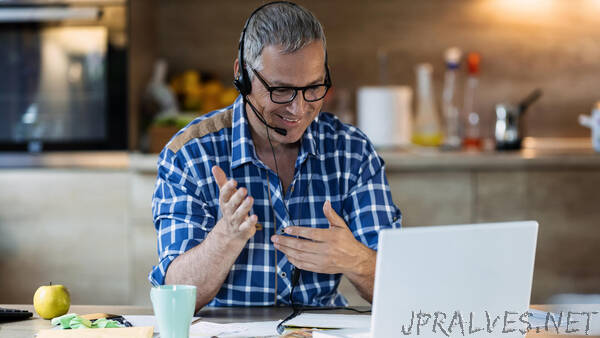 “Researchers are developing a new technology that uses hand gestures to carry out commands on computers.

The prototype, called “Typealike,” works through a regular laptop webcam with a simple affixed mirror. The program recognizes the user’s hands beside or near the keyboard and prompts operations based on different hand positions.

A user could, for example, place their right hand with the thumb pointing up beside the keyboard, and the program would recognize this as a signal to increase the volume. Different gestures and different combinations of gestures can be programmed to carry out a wide range of operations.

The innovation in the field of human-computer interaction aims to make user experience faster and smoother, with less need for keyboard shortcuts or working with a mouse and trackpad.

“It started with a simple idea about new ways to use a webcam,” said Nalin Chhibber, a recent master’s graduate from the University of Waterloo’s Cheriton School of Computer Science. “The webcam is pointed at your face, but the most interaction happening on a computer is around your hands. So, we thought, what could we do if the webcam could pick up hand gestures?”

The initial insight led to the development of a small mechanical attachment that redirects the webcam downwards towards the hands. The team then created a software program capable of understanding distinct hand gestures in variable conditions and for different users. The team used machine learning techniques to train the Typealike program.

“It’s a neural network, so you need to show the algorithm examples of what you’re trying to detect,” said Fabrice Matulic, senior researcher at Preferred Networks Inc. and a former postdoctoral researcher at Waterloo. “Some people will make gestures a little bit differently, and hands vary in size, so you have to collect a lot of data from different people with different lighting conditions.”

The team recorded a database of hand gestures with dozens of research volunteers. They also had the volunteers do tests and surveys to help the team understand how to make the program as functional and versatile as possible.

“We’re always setting out to make things people can easily use,” said Daniel Vogel, an associate professor of computer science at Waterloo. “People look at something like Typealike, or other new tech in the field of human-computer interaction, and they say it just makes sense. That’s what we want. We want to make technology that’s intuitive and straightforward, but sometimes to do that takes a lot of complex research and sophisticated software.”

The researchers say there are further applications for the Typealike program in virtual reality where it could eliminate the need for hand-held controllers.