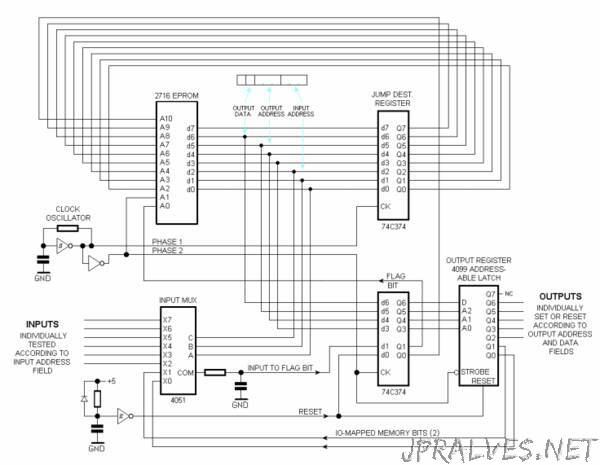 This is a design I came up with in response to a customer’s request to add some new automated functions to a printing press. The new behavior might reasonably have been achieved using hardwired counters, gates and flip-flops, but I wanted to use programmable logic instead. (Later, when additional presses were modified, I switched to using a microcontroller.)

This is not a Motorola MC14500 computer, but it was the MC14500 that introduced me to the idea of one-bit computing. Exploring ways to reduce the chip count, a series of pencil & paper designs revealed the MC14500 itself could be omitted! Its tiny complement of 16 instructions was actually overkill.

In contrast to the 14500’s 4-bit op-code, my design uses no op-code at all. That’s because there’s only one instruction and it executes endlessly. That instruction includes two functions. One is an Input Test whose result controls a two-way branch, and the other is an Output operation that writes 1 or 0 to any of the bits in the output port (a 4099 addressable latch). For the printing press application the inputs were driven by mechanical switches and by a pair of logic signals from the original press wiring. The outputs drove Solid State Relays which, in turn, activated solenoids.”