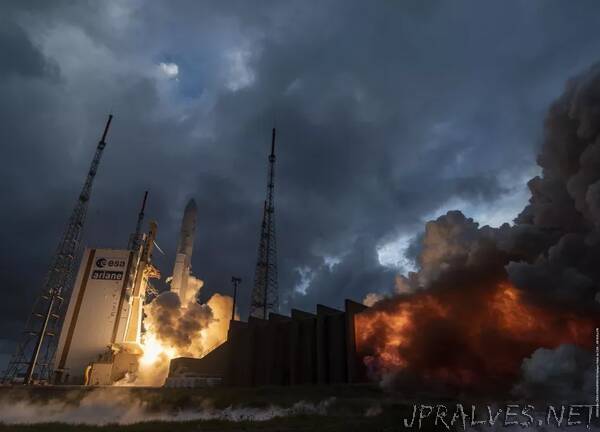 Konnect, with a launch mass of 3619 kg, was the first to be released after about 27 minutes.

Konnect will provide broadband services for Europe and Africa and has a design life of 15 years. It was built by Thales Alenia Space for Eutelsat, its commercial operator, and is the first satellite from the new Spacebus Neo product line developed under an ESA Partnership Project managed jointly by ESA and the French Space Agency, CNES.

ESA Partnership Projects such as Neosat federate European industry around large-scale programmes, developing innovative cutting-edge solutions in partnership with private or public partners. This approach allows European prime contractors and equipment suppliers to be competitive on the world commercial market.

The Spacebus Neo platform is the result of a European-wide cooperation with contributions from 17 Member States, with more than 90% of the platform sourced in Europe.

So far, eleven Neosat satellites have already been sold, seven of which are Spacebus Neo. Through those recurring sales the ESA Partnership Project has generated an exceptional return on investment to the programme’s Participating States and their industries.

The second satellite – the 3357 kg GSAT-30 – was released 11 minutes after Konnect. Owned and operated by the Indian Space Research Organisation ISRO, GSAT-30 will provide high-quality television, telecommunications and broadcasting services over the Indian mainland and islands. The satellite has a design life of more than 15 years.

Overall the performance requested for the launch was about 7888 kg. The satellites totalled about 6976 kg, with payload adapters and carrying structures making up the rest.