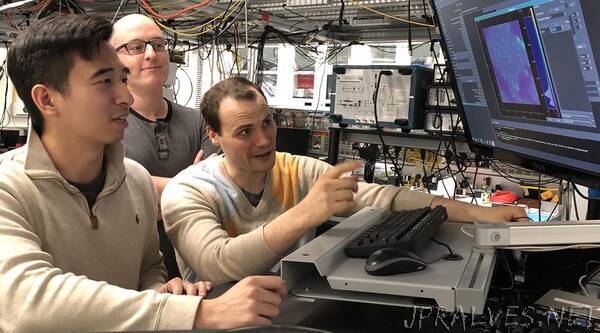 “UChicago team discovers innovative way to tune quantum signals
After decades of miniaturization, the electronic components we’ve relied on for computers and modern technologies are now starting to reach fundamental limits. Faced with this challenge, engineers and scientists around the world are turning toward a radically new paradigm: quantum information technologies.

Quantum technology, which harnesses the strange rules that govern particles at the atomic level, is normally thought of as much too delicate to coexist with the electronics we use every day in phones, laptops and cars. However, scientists with the University of Chicago’s Pritzker School of Molecular Engineering announced a significant breakthrough: Quantum states can be integrated and controlled in commonly used electronic devices made from silicon carbide.

“The ability to create and control high-performance quantum bits in commercial electronics was a surprise,” said lead investigator David Awschalom, the Liew Family Professor in Molecular Engineering at UChicago and a pioneer in quantum technology. “These discoveries have changed the way we think about developing quantum technologies—perhaps we can find a way to use today’s electronics to build quantum devices.”

In two papers published in Science and Science Advances, Awschalom’s group demonstrated they could electrically control quantum states embedded in silicon carbide. The breakthrough could offer a means to more easily design and build quantum electronics—in contrast to using exotic materials scientists usually need to use for quantum experiments, such as superconducting metals, levitated atoms or diamonds.

These quantum states in silicon carbide have the added benefit of emitting single particles of light with a wavelength near the telecommunications band. “This makes them well suited to long-distance transmission through the same fiber-optic network that already transports 90% of all international data worldwide,” said Awschalom, senior scientist at Argonne National Laboratory and director of the Chicago Quantum Exchange.

Moreover, these light particles can gain exciting new properties when combined with existing electronics. For example, in the Science Advances paper, the team was able to create what Awschalom called a “quantum FM radio;” in the same way music is transmitted to your car radio, quantum information can be sent over extremely long distances.

“All the theory suggests that in order to achieve good quantum control in a material, it should be pure and free of fluctuating fields,” said graduate student Kevin Miao, first author on the paper. “Our results suggest that with proper design, a device can not only mitigate those impurities, but also create additional forms of control that previously were not possible.”

In the Science paper, they describe a second breakthrough that addresses a very common problem in quantum technology: noise.

“Impurities are common in all semiconductor devices, and at the quantum level, these impurities can scramble the quantum information by creating a noisy electrical environment,” said graduate student Chris Anderson, a co-first author on the paper. “This is a near-universal problem for quantum technologies.”

But, by using one of the basic elements of electronics—the diode, a one-way switch for electrons—the team discovered another unexpected result: The quantum signal suddenly became free of noise and was almost perfectly stable.

“In our experiments we need to use lasers, which unfortunately jostle the electrons around. It’s like a game of musical chairs with electrons; when the light goes out everything stops, but in a different configuration,” said graduate student Alexandre Bourassa, the other co-first author on the paper. “The problem is that this random configuration of electrons affects our quantum state. But we found that applying electric fields removes the electrons from the system and makes it much more stable.”

By integrating the strange physics of quantum mechanics with well-developed classical semiconductor technology, Awschalom and his group are paving the way for the coming quantum technology revolution.

“This work brings us one step closer to the realization of systems capable of storing and distributing quantum information across the world’s fiber-optic networks,” Awschalom said. “Such quantum networks would bring about a novel class of technologies allowing for the creation of unhackable communication channels, the teleportation of single electron states and the realization of a quantum internet.”

For its research, the team used the Chicago Materials Research Center and the Pritzker Nanofabrication Facility. Awschalom is also working with the Polsky Center for Entrepreneurship and Innovation at the University of Chicago to advance these discoveries.