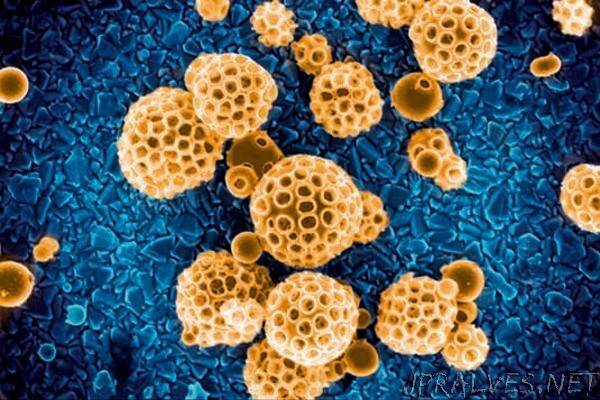 “Iridium is an ideal catalyst for the electrolytic production of hydrogen from water – but it is extremely expensive. But now a new kind of electrode made of highly porous material does an excellent job with just a hint of iridium.

Today, the royal road to the effective electrolysis of water for the production of hydrogen gas in so called proton exchange membrane (PEM) electrolyzers is to reduce the amount of catalytically highly active but scare nobel metal iridium and at the same time maintain the hydrogen output. In this type of electrolyzer cell the hydrogen ions migrate via a proton exchange membrane from the oxygen producing anode to the hydrogen producing cathode. The membrane-based technique offers many advantages. The catalyst coated membrane itself is very thin, which makes the electrolytic cell itself small and more versatile, and the absence of a liquid electrolyte means that the whole system requires virtually no maintenance. Such cells also allow hydrogen production at elevated pressures facilitating and lowing the energy demand for further storage as compressed gas. Finally dynamic load operation is possible with the PEM-technology to react to fluctuations in available current within seconds which renders it suitable for the coupling to renewable energy sources.

But the technology also has one major drawback. Formation of oxygen at the anode is dependent on the use of iridium oxide (IrO2) as a catalyst. IrO2 is a very stable and efficient promoter of this reaction. The problem is that iridium itself is rarer than gold or even platinum, and it is at least as expensive as the latter. Many attempts have been made to find an alternative, but nothing yet tested approaches the long-term stability and catalytic activity of iridium oxide.

Just a dash of iridium is enough

Now LMU-based chemists involved in the Cluster of Excellence e-conversion, in collaboration with a team at Forschungszentrum Jülich, have succeeded in increasing the yield of hydrogen by a factor of 8 (relative to a commercial reference electrode) by using a novel and highly porous material as catalyst. This success implies that it should be possible to develop an electrolytic cell that achieves the same efficiency as current iridium-based systems but requires only 10% as much iridium.

The new electrode was developed within the framework of the Kopernikus Power-2-X Research Network, which is funded by the Federal Ministry for Education and Research. Its design and performance characteristics are described in a paper published in the journal Advanced Functional Materials. The system makes use of a novel high-porosity oxidic support on which iridium can be evenly dispersed as a thin film, which is easily accessible to water molecules and exhibits high catalytic activity.

The team first synthesized nanostructured and conductive antimony-doped tin oxide microparticles. These particles provide a highly porous scaffold for binding of the iridium catalyst. They then prepared an aqueous colloidal suspension of iridium oxide nanoparticles, which were loaded into the porous microparticles by means of a solvothermal reaction at high temperature and pressure. This resulted in the reduction of the iridium oxide particles to metallic Ir. A final thermal oxidation step then led to the formation of iridium oxide nanoparticles within the pores of the metallic scaffold. Subsequent scanning electron microscopy confirmed that every last cavity in the scaffold was coated with a thin film of the catalyst. – And indeed, electrodes coated with the new material passed the final test with flying colors. In terms of activity, i.e. hydrogen generation, the efficiency per gram of bound iridium exceeded that of a commercially available PEM by no less than eightfold.

As the paper’s first author Daniel Böhm points out, the synthesis procedure has one huge advantage. “We can now focus on optimizing each parameter individually. The relevant factors that can be adjusted include the composition, structure and pore size of the material, its conductivity and the level of loading with iridium. In the end we will obtain a highly active, fully optimized system. All the steps in the synthetic route are also compatible with the demands of industrial-scale production, so the approach might be ripe for technical application within a relatively short time.”

The material currently used in commercial electrolyzers must meet very high standards in order to guarantee stable operation over many years. Upcoming projects that will address this issue are already planned, says Prof. Dina Fattakhova-Rohlfing of Forschungszentrum Jülich. “First, we want to synthesize even more stable catalysts with the aid of novel nanoarchitectures. And then we would like to investigate how the properties of these materials behave when subjected to operational conditions over longer periods of time.” (e-conversion/LMU)
Advanced Functional Materials 2019”