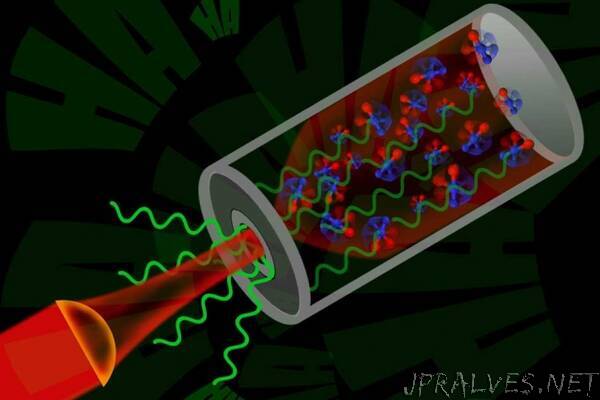 Within the electromagnetic middle ground between microwaves and visible light lies terahertz radiation, and the promise of “T-ray vision.”

Terahertz waves have frequencies higher than microwaves and lower than infrared and visible light. Where optical light is blocked by most materials, terahertz waves can pass straight through, similar to microwaves. If they were fashioned into lasers, terahertz waves might enable “T-ray vision,” with the ability to see through clothing, book covers, and other thin materials. Such technology could produce crisp, higher-resolution images than microwaves, and be far safer than X-rays.

The reason we don’t see T-ray machines in, for instance, airport security lines and medical imaging facilities is that producing terahertz radiation requires very large, bulky setups or devices, many operating at ultracold temperatures, that produce terahertz radiation at a single frequency — not very useful, given that a wide range of frequencies is required to penetrate various materials.

Now researchers from MIT, Harvard University, and the U.S. Army have built a compact device, the size of a shoebox, that works at room temperature to produce a terahertz laser whose frequency they can tune over a wide range. The device is built from commercial, off-the-shelf parts and is designed to generate terahertz waves by spinning up the energy of molecules in nitrous oxide, or, as it’s more commonly known, laughing gas.

Steven Johnson, professor of mathematics at MIT, says that in addition to T-ray vision, terahertz waves can be used as a form of wireless communication, carrying information at a higher bandwidth than radar, for instance, and doing so across distances that scientists can now tune using the group’s device.

“By tuning the terahertz frequency, you can choose how far the waves can travel through air before they are absorbed, from meters to kilometers, which gives precise control over who can ‘hear’ your terahertz communications or ‘see’ your terahertz radar,” Johnson says. “Much like changing the dial on your radio, the ability to easily tune a terahertz source is crucial to opening up new applications in wireless communications, radar, and spectroscopy.”

Johnson and his colleagues have published their results today in the journal Science. Co-authors include MIT postdoc Fan Wang, along with Paul Chevalier, Arman Armizhan, Marco Piccardo, and Federico Capasso of Harvard University, and Henry Everitt of the U.S. Army Combat Capabilities Development Command Aviation and Missile Center.

Since the 1970s, scientists have experimented with generating terahertz waves using molecular gas lasers — setups in which a high-powered infrared laser is shot into a large tube filled with gas (typically methyl fluoride) whose molecules react by vibrating and eventually rotating. The rotating molecules can jump from one energy level to the next, the difference of which is emitted as a sort of leftover energy, in the form of a photon in the terahertz range. As more photons build up in the cavity, they produce a terahertz laser.

Improving the design of these gas lasers has been hampered by unreliable theoretical models, the researchers say. In small cavities at high gas pressures, the models predicted that, beyond a certain pressure, the molecules would be too “cramped” to spin and emit terahertz waves. Partly for this reason, terahertz gas lasers typically used meters-long cavities and large infrared lasers.

However, in the 1980s, Everitt found that he was able to produce terahertz waves in his laboratory using a gas laser that was much smaller than traditional devices, at pressures far higher than the models said was possible. This discrepancy was never fully explained, and work on terahertz gas lasers fell by the wayside in favor of other approaches.

A few years ago, Everitt mentioned this theoretical mystery to Johnson when the two were collaborating on other work as part of MIT’s Institute for Soldier Nanotechnologies. Together with Everitt, Johnson and Wang took up the challenge, and ultimately formulated a new mathematical theory to describe the behavior of a gas in a molecular gas laser cavity. The theory also successfully explained how terahertz waves could be emitted, even from very small, high-pressure cavities.

Johnson says that while gas molecules can vibrate at multiple frequencies and rotational rates in response to an infrared pump, previous theories discounted many of these vibrational states and assumed instead that a handful of vibrations were what ultimately mattered in producing a terahertz wave. If a cavity were too small, previous theories suggested that molecules vibrating in response to an incoming infrared laser would collide more often with each other, releasing their energy rather than building it up further to spin and produce terahertz.

Instead, the new model tracked thousands of relevant vibrational and rotational states among millions of groups of molecules within a single cavity, using new computational tricks to make such a large problem tractable on a laptop computer. It then analyzed how those molecules would react to incoming infrared light, depending on their position and direction within the cavity.

“We found that when you include all these other vibrational states that people had been throwing out, they give you a buffer,” Johnson says. “In simpler models, the molecules are rotating, but when they bang into other molecules they lose everything. Once you include all these other states, that doesn’t happen anymore. These collisions can transfer energy to other vibrational states, and sort of give you more breathing room to keep rotating and keep making terahertz waves.”

Once the team found that their new model accurately predicted what Everitt observed decades ago, they collaborated with Capasso’s group at Harvard to design a new type of compact terahertz generator by combining the model with new gases and a new type of infrared laser.

For the infrared source, the researchers used a quantum cascade laser, or QCL — a more recent type of laser that is compact and also tunable.

The researchers teamed up with Capasso, a pioneer in the development of QCLs, who provided a laser that produced a range of power that their theory predicted would work with a cavity the size of a pen (about 1/1,000 the size of a conventional cavity). The researchers then looked for a gas to spin up.

The team searched through libraries of gases to identify those that were known to rotate in a certain way in response to infrared light, eventually landing on nitrous oxide, or laughing gas, as an ideal and accessible candidate for their experiment.

They ordered laboratory-grade nitrous oxide, which they pumped into a pen-sized cavity. When they sent infrared light from the QCL into the cavity, they found they could produce a terahertz laser. As they tuned the QCL, the frequency of terahertz waves also shifted, across a wide range.

“These demonstrations confirm the universal concept of a terahertz molecular laser source which can be broadly tunable across its entire rotational states when pumped by a continuously tunable QCL,” Wang says.

Since these initial experiments, the researchers have extended their mathematical model to include a variety of other gas molecules, such as carbon monoxide and ammonia, providing scientists with a menu of different terahertz generation options with different frequencies and tuning ranges, paired with a QCL matched to each gas. The group’s theoretical tools also enable scientists to tailor the cavity design to different applications. They are now pushing toward more focused beams and higher powers, with commercial development on the horizon.

“These gas lasers were for a long time seen as old technology, and people assumed these were huge, low-power, nontunable things, so they looked to other terahertz sources,” Johnson says. “Now we’re saying they can be small, tunable, and much more efficient. You could fit this in your backpack, or in your vehicle for wireless communication or high-resolution imaging. Because you don’t want a cyclotron in your car.”

This research was supported in part by the U.S. Army Research Office and the National Science Foundation.”