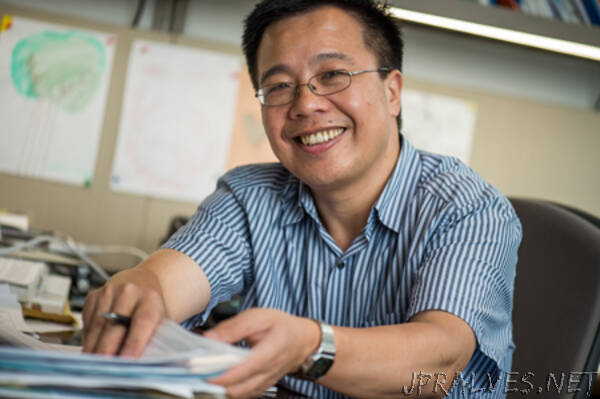 The traveler is an alloy of cerium palladium and aluminum, and its journey is described in a study published online this week in Nature Physics by Si, a theoretical physicist and director of the Rice Center for Quantum Materials (RCQM), and colleagues in China, Germany and Japan.

Si’s map is a graph called a phase diagram, a tool that condensed-matter physicists often use to interpret what happens when a material changes phase, as when a solid block of ice melts into liquid water.

The regions on Si’s map are areas where electrons follow different sets of rules, and the paper describes how the researchers used the geometric arrangement of atoms in the alloy in combination with various pressures and magnetic fields to alter the alloy’s path and bring it into a region where physicists have only been able to speculate about the rules that govern electron behavior.

“That’s the corner, or portion, of this road map that everybody really wants to access,” Si said, pointing to the upper left side of the phase diagram, high up the vertical axis marked G. “It has taken the community a huge amount of effort to look through candidate materials that have the feature of geometrical frustration, which is one way to realize this large G.”

The frustration stems from the arrangement of cerium atoms in the alloy in a series of equilateral triangles. The kagome lattice arrangement is so named because of its similarity to patterns in traditional Japanese kagome baskets, and the triangular arrangement ensures that spins, the magnetic states of electrons, cannot arrange themselves as they normally would under certain conditions. This frustration provided an experimental lever that Si and his collaborators could use to explore a new region of the phase diagram where the boundary between two well-studied and well-understood states — one marked by an orderly arrangement of electron spins and the other by disorder — diverged.

“If you start with an ordered, antiferromagnetic pattern of spins in an up-down, up-down arrangement, there are several ways of softening this hard pattern of the spins,” said Si, the Harry C. and Olga K. Wiess Professor in Rice’s Department of Physics and Astronomy. “One way is through coupling to a background of conduction electrons, and as you change conditions to enhance this coupling, the spins get more and more scrambled. When the scrambling is strong enough, the ordered pattern is destroyed, and you end up with a non-ordered phase, a paramagnetic phase.”

Physicists can plot this journey from order to disorder as a line on a phase diagram. In the example above, the line would begin in a region marked “AF” for antiferromagnetic phase, and continue across one border into a neighboring region marked “P” for paramagnetic. The border crossing is the “quantum critical point” where billions upon trillions of electrons act in unison, adjusting their stances to conform to the rules of the regime they have just entered.

Si is a leading proponent of quantum criticality, a theoretical framework that seeks to describe and predict the behavior of quantum materials in relation to these critical points and phase changes.

“What the geometrical frustration does is to extend the process where the spin order becomes more and more fragile so that it’s no longer just a point that the system passes through on the way to being disordered,” he said. “In fact, that point sort of splits out into a separate region, with distinct borders on either side.”

Si said the team, which included co-corresponding authors and RCQM partners Frank Steglich of the Max Planck Institute for Chemical Physics of Solids in Dresden, Germany and Peijie Sun of the Chinese Academy of Sciences in Beijing, performed experiments that provided evidence that the cerium palladium aluminum alloy undergoes two border crossings.

He said measurements of the alloy’s electronic properties as it passed through the region couldn’t be explained by traditional theories that describe the behavior of metals, which means the alloy behaved as a “strange” metal in the mystery territory.

“The system acted as a kind of spin liquid, albeit a metallic one,” he said.

Si said the results demonstrate that geometrical frustration can be used as a design principle to create strange metals.

“That is significant because the unusual electronic excitations in strange metals are also the underlying exotic properties of other strongly correlated quantum materials, including most high-temperature superconductors,” he said.

RCQM leverages global partnerships and the strengths of more than 20 Rice research groups to address questions related to quantum materials. RCQM is supported by Rice’s offices of the provost and the vice provost for research, the Wiess School of Natural Sciences, the Brown School of Engineering, the Smalley-Curl Institute and the departments of Physics and Astronomy, Electrical and Computer Engineering, and Materials Science and NanoEngineering.”