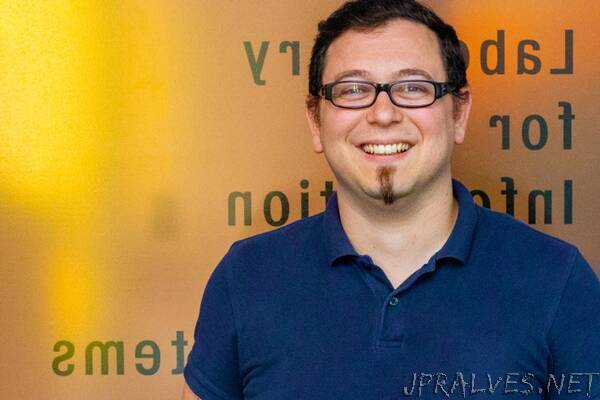 “Along with studying theory, “it’s also important to me that the work we are doing will help to solve real-world problems,” says LIDS student Omer Tanovic.

Omer Tanovic, a PhD candidate in the Department of Electrical Engineering and Computer Science, joined the Laboratory for Information and Decision Systems (LIDS) because he loves studying theory and turning research questions into solvable math problems. But Omer says that his engineering background — before coming to MIT he received undergraduate and master’s degrees in electrical engineering and computer science at the University of Sarajevo in Bosnia-Herzegovina — has taught him never to lose sight of the intended applications of his work, or the practical parameters for implementation.

“I love thinking about things on the abstract math level, but it’s also important to me that the work we are doing will help to solve real-world problems,” Omer says. “Instead of building circuits, I am creating algorithms that will help make better circuits.”

One real-world problem that captured Omer’s attention during his PhD is power efficiency in wireless operations. The success of wireless communications has led to massive infrastructure expansion in the United States and around the world. This has included many new cell towers and base stations. As these networks and the volume of information they handle grow, they consume an increasingly hefty amount of power, some of which goes to powering the system as it’s supposed to, but much of which is lost as heat due to energy inefficiency. This is a problem both for companies such as mobile network operators, which have to pay large utility bills to cover their operational costs, and for society at large, as the sector’s greenhouse gas emissions rise.

These concerns are what motivate Omer in his research. Most of the projects that he has worked on at MIT seek to design signal processing systems, optimized to different measures, that will increase power efficiency while ensuring that the output signal (what you hear when talking to someone on the phone, for instance) is true to the original input (what was said by the person on the other end of the call).

His latest project seeks to address the power efficiency problem by decreasing the peak-to-average power ratio (PAPR) of wireless communication signals. In the broadest sense, PAPR is an indirect indicator of how much power is required to send and receive a clear signal across a network. The lower this ratio is, the more energy-efficient the transmission. Namely, much of the power consumed in cellular networks is dedicated to power amplifiers, which collect low-power electronic input and convert it to a higher-power output, such as picking up a weak radio signal generated inside a cell phone and amplifying it so that, when emitted by an antenna it is strong enough to reach a cell tower. This ensures that the signal is robust enough to maintain adequate signal-to-noise ratio over the communication link. Power amplifiers are at their most efficient when operating near their saturation level, at maximum output power. However, because cellular network technology has evolved in a way that accommodates a huge volume and variety of information across the network — resulting in far less uniform signals than in the past — modern communication standards require signals with big peak-to-average power ratios. This means that a radio frequency transmitter must be designed such that the underlying power amplifier can handle peaks much higher than the average power being transmitted, and therefore, most of the time, the power amplifier is working inefficiently — far from its saturation level.

“Every cell tower has to have some kind of PAPR reduction algorithm in place in order to operate. But the algorithms they use are developed with little or no guaranties on improving system performance,” Omer says. “A common conception is that optimal algorithms, which would certainly improve system performance, are either too expensive to implement — in terms of power or computational capacity — or cannot be implemented at all.”

Omer, who is supervised by LIDS Professor Alexandre Megretski, designed an algorithm that can decrease the PAPR of a modern communication signal, which would allow the power amplifier to operate closer to its maximum efficiency, thus reducing the amount of energy lost in the process. To create this system he first considered it as an optimization problem, the conditions of which meant that any solution would not be implementable, as it would require infinite latency, meaning an infinite delay before transmitting the signal. However, Omer showed that the underlying optimal system, even though of infinite latency, has a desirable fading-memory property, and so he could create an approximation with finite latency — an acceptable lag time. From this, he developed a way to best approximate the optimal system. The approximation, which is implementable, allows tradeoffs between precision and latency, so that real-time realizations of the algorithm can improve power efficiency without adding too much transmission delay or too much distortion to the signal. Omer applied this system using standardized test signals for 4G communication and found that, on average, he could get around 50 percent reduction in the peak-to-average power ratio while satisfying standard measures of quality of digital communication signals.

Omer’s algorithm, along with improving power efficiency, is also computationally efficient. “This is important in order to ensure that the algorithm is not just theoretically implementable, but also practically implementable,” Omer says, once again stressing that abstract mathematical solutions are only valuable if they cohere to real-world parameters. Microchip real estate in communications is a limited commodity, so the algorithm cannot take up much space, and its mathematical operations have to be executed quickly, as latency is a critical factor in wireless communications. Omer believes that the algorithm could be adapted to solve other engineering problems with similar frameworks, including envelope tracking and model predictive control.

While he has been working on this project, Omer has made a home for himself at MIT. Two of his three sons were born here in Cambridge — in fact, the youngest was born on campus, in the stairwell of Omer and his wife’s graduate housing building. “The neighbors slept right through it,” Omer says with a laugh.

Omer quickly became an active member of the LIDS community when he arrived at MIT. Most notably, he was part of the LIDS student conference and student social committees, where, in addition to helping run the annual LIDS Student Conference, a signature lab event now in its 25th year, he also helped to organize monthly lunches, gatherings, and gaming competitions, including a semester-long challenge dubbed the OLIDSpics (an homage to the Olympic Games). He says that being on the committees was a great way to engage with and contribute to the LIDS community, a group for which he is grateful.

“At MIT, and especially at LIDS, you can learn something new from everyone you speak to. I’ve been in many places, and this is the only place where I’ve experienced a community like that,” Omer says.

As Omer’s time at LIDS draws to an end, he is still debating what to do next. On one hand, his love of solving real-world problems is drawing him toward industry. He spent four summers during his PhD interning at companies including the Mitsubishi Electric Research Lab. He enjoyed the fast pace of industry, being able to see his solutions implemented relatively quickly.

On the other hand, Omer is not sure he could ever leave academia for long; he loves research and is also truly passionate about teaching. Omer, who grew up in Bosnia-Herzegovina, began teaching in his first year of high school, at a math camp for younger children. He has been teaching in one form or another ever since.

At MIT, Omer has taught both undergraduate- and graduate-level courses, including as an instructor-G, an appointment only given to advanced students who have demonstrated teaching expertise. He has won two teaching awards, the MIT School of Engineering Graduate Student Extraordinary Teaching and Mentoring Award in 2018 and the MIT EECS Carlton E. Tucker Teaching Award in 2017.

The magnitude of Omer’s love for teaching is clear when he speaks about working with students: “That moment when you explain something to a student and you see them really understand the concept is priceless. No matter how much energy you have to spend to make that happen, it’s worth it,” Omer says.

In communications, power efficiency is key, but when it comes to research and teaching, there’s no limit to Omer’s energy.”