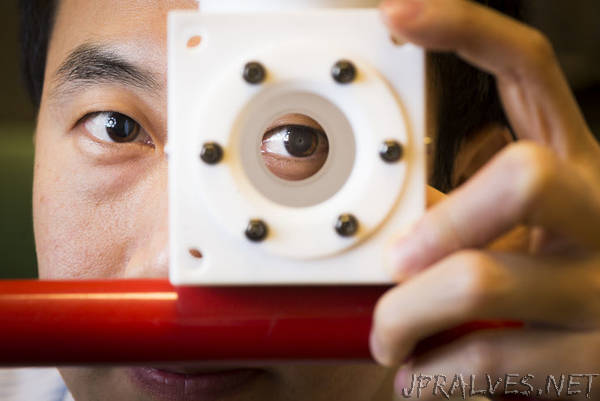 “Researchers at LiU are working to develop a method to convert water and carbon dioxide to the renewable energy of the future, using the energy from the sun and graphene applied to the surface of cubic silicon carbide.

The research group has now taken an important step towards this goal, and developed a method that makes it possible to produce graphene with several layers in a tightly controlled process. They have also shown that graphene acts as a superconductor in certain conditions. Their results have been published in the scientific journals Carbon and Nano Letters.

The first step is to develop the material they plan to use. Researchers at Linköping University have previously developed a world-leading method to produce cubic silicon carbide, which consists of silicon and carbon. The cubic form has the ability to capture energy from the sun and create charge carriers. This is, however, not sufficient. Graphene, one of the thinnest materials ever produced, plays a key role in the project. The material comprises a single layer of carbon atoms bound to each other in a hexagonal lattice. Graphene has a high ability to conduct an electric current, a property that would be useful for solar energy conversion. It also has several unique properties, and possible uses of graphene are being extensively studied all over the world.

In recent years, the researchers have attempted to improve the process by which graphene grows on a surface in order to control the properties of the graphene. Their recent progress is described in an article in the scientific journal Carbon.

“It is relatively easy to grow one layer of graphene on silicon carbide. But it’s a greater challenge to grow large-area uniform graphene that consists of several layers on top of each other. We have now shown that it is possible to grow uniform graphene that consists of up to four layers in a controlled manner”, says Jianwu Sun, of the Department of Physics, Chemistry and Biology at LiU.

One of the difficulties posed by multilayer graphene is that the surface becomes uneven when different numbers of layers grow at different locations. The edge when one layer ends has the form of a tiny, nanoscale, staircase. For the researchers, who want large flat areas, these steps are a problem. It is particularly problematic when steps collect in one location, like a wrongly built staircase in which several steps have been united to form one large step. The researchers have now found a way to remove these united large steps by growing the graphene at a carefully controlled temperature. Furthermore, the researchers have shown that their method makes it possible to control how many layers the graphene will contain. This is the first key step in an ongoing research project whose goal is to make fuel from water and carbon dioxide.

Graphene as a superconductor
In a closely related article in the journal Nano Letters, the researchers describe investigations into the electronic properties of multilayer graphene grown on cubic silicon carbide.

“We discovered that multilayer graphene has extremely promising electrical properties that enable the material to be used as a superconductor, a material that conducts electrical current with zero electrical resistance. This special property arises solely when the graphene layers are arranged in a special way relative to each other”, says Jianwu Sun.

Theoretical calculations had predicted that multilayer graphene would have superconductive properties, provided that the layers are arranged in a particular way. In the new study, the researchers demonstrate experimentally for the first time that this is the case. Superconducting materials are used in, among other things, superconducting magnets – extremely powerful magnets found in magnet resonance cameras for medical investigations, and in particle accelerators for research. There are many potential areas of application for superconductors, such as electrical supply lines with zero energy loss, and high-speed trains that float on a magnetic field. Their use is currently limited by the inability to produce superconductors that function at room temperature: currently available superconductors function only at extremely low temperatures.

The studies have been carried out in collaboration with researchers at the MAX IV Laboratory in Lund, with financial support from the Swedish Research Council, FORMAS, STINT, ÅForsk and Stiftelsen Olle Engkvist Byggmästare.”