ITEAD studio is based in Shenzhen, China. As well as being the location of China’s biggest electronics market it also has one the most integrated electronic supply chains in the world. A vast number of exciting and innovative products are designed, sourced and manufactured around us every day.

Whether it’s to play with cool electronic gadgets or to build the next iPad, we believe that everyone should have access to the tools, hardware platforms and resources to fulfil their ambitions. Our goal is to fuel an innovation revolution with easy to use prototyping modules, low cost development platforms and even custom made solutions to help you get your great ideas in to fruition in the quickest possible time. 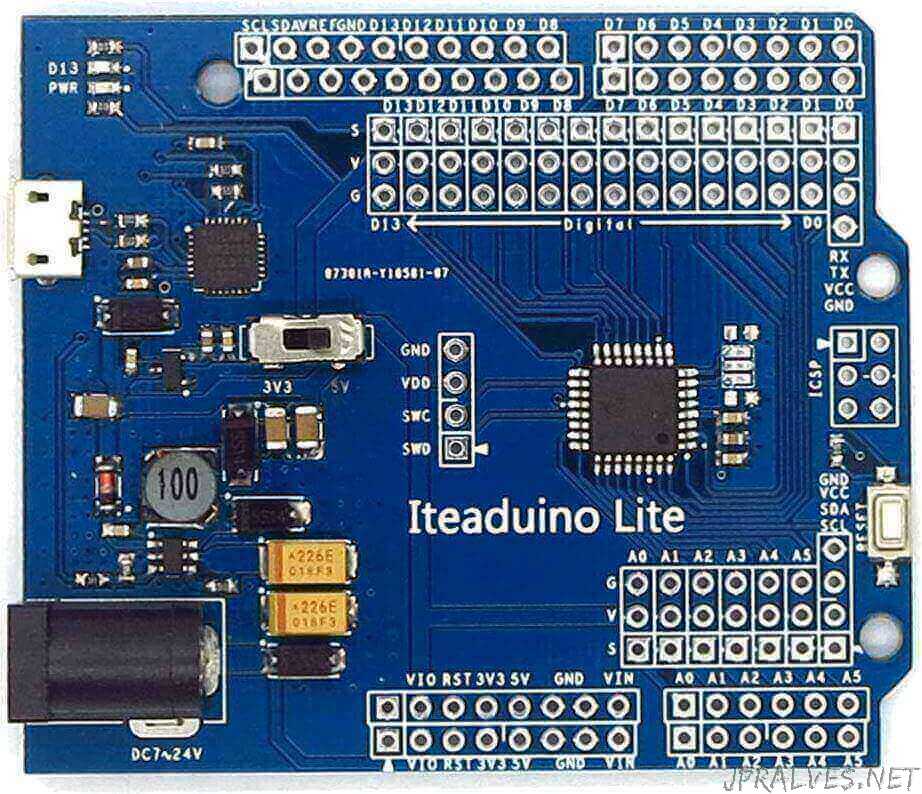 Iteaduino Lite is a new Arduino mainboard based on LGT8F88A compatible with Arduino interfaces. With 14 digital input and output pins (of which 6 pins can be used for PWM output), 6 analog inputs and SWD debug interface, the operating frequency can reach up to 32MHz. Compared to other Arduino mainboards, it runs faster with more powerful functions. It is compatible with most of Arduino libraries, and the development is as simple as Arduino.

The special thing about it is that it doesn’t use an Atmel micro controller. It uses a micro controller made by the Chinese company LogicGreen Technologies. I’ve never heard of the company and their website doesn’t have much English content. But they make micro controllers. The chip that is used on the Iteaduino Lite is the LGT8F88A, a clone of the Atmel ATmega88. The specifications of the chip look almost the same as the Atmel part. One of the differences is that they claim the chip can run at 32MHz. Atmel only guarantees 20MHz.
The Iteaduino board has a 16MHz micro controller to make it compatible with the Arduino IDE. Changing the clock to 32MHz would require modifications to the Arduino core files else some functions and libraries would not work correctly. LogicGreen has published the following file for people that want to migrate code from the ATmega88 to the LGT8F88A. The LGT8F88A uses a very different clock system compare to the ATmega88. For Arduino users this doesn’t matter, as that is all handled by the Arduino IDE.

The board has 2 voltage regulators, a 5V and a 3.3V regulator. So you can easily switch between both voltages. The board did not have any headers soldered on it but came with a set of female headers. There are holes to solder lots of male pins on the board, 3 rows next to every pin. One for signal, one for VCC and a row of GND pins. The downside of the board is that the LGT8F88A only has 8kb of flash and 1kb of SRAM. But this is enough for a lot of projects. 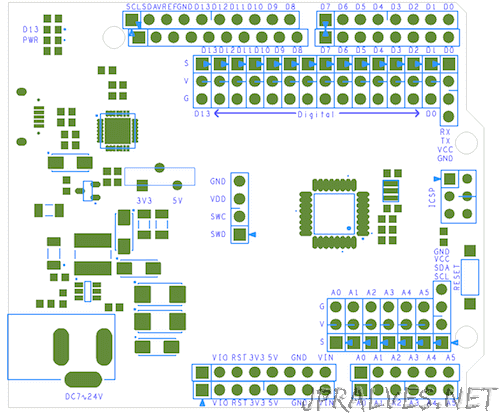