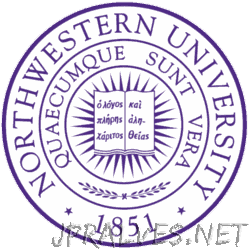 Northwestern University (NU) is a private research university based in Evanston, Illinois, United States, with other campuses located in Chicago and Doha, Qatar, and academic programs and facilities in Miami, Florida; Washington, D.C.; and San Francisco, California. Along with its selective undergraduate programs, Northwestern is known for its Kellogg School of Management, Pritzker School of Law, Feinberg School of Medicine, Bienen School of Music, Medill School of Journalism, Media, Integrated Marketing Communications, and McCormick School of Engineering and Applied Science. Northwestern was founded in 1851 by John Evans, for whom the city of Evanston is named, and eight other lawyers, businessmen and Methodist leaders. Its founding purpose was to serve the Old Northwest Territory, an area that includes the states of Ohio, Indiana, Illinois, Michigan, Wisconsin and parts of Minnesota. Instruction began in 1855 and women were admitted in 1869. Today, the main campus is a 240-acre (97 ha) parcel in Evanston, along the shores of Lake Michigan 12 miles north of downtown Chicago. The university's law, medical, and professional schools, along with its nationally ranked affiliated Northwestern Memorial Hospital, are located on a 25-acre (10 ha) campus in Chicago's Streeterville neighborhood. In 2008, the university opened a campus in Education City, Doha, Qatar with programs in journalism and communication. In 2016, Northwestern opened its San Francisco space at 44 Montgomery St., which hosts journalism, engineering, and marketing programs.

“Purified tin selenide has extraordinarily high thermoelectric performance Perseverance, NASA’s 2020 Mars rover, is powered by something very desirable here on Earth: a thermoelectric device, which converts heat to useful electricity. On Mars, the heat source is the radioactive …

“An interdisciplinary team of scientists from Northwestern Engineering and the Massachusetts Institute of Technology has used artificial intelligence (AI) techniques to build new, free, and easy-to-use tools that allow scientists to accelerate the rate of discovery and study of materials …

“Mix pair is ‘elusive missing piece of the family picture of compact object mergers’ A long time ago, in two galaxies about 900 million light-years away, two black holes each gobbled up their neutron star companions, triggering gravitational waves that …

“Borophane is stable outside a vacuum, opening possibilities for real-world applications. Northwestern Engineering researchers have, for the first time, created borophane — atomically thin boron that is stable at standard temperatures and air pressures. Researchers have long been excited by the …

“Northwestern Engineering researchers have developed a first-of-its-kind life-like material that acts as a soft robot. It can walk at human speed, pick up and transport cargo to a new location, climb up hills, and even break-dance to release a particle …

“Security officials are tasked with preventing criminals from smuggling dangerous materials into a country, and detecting nuclear substances has been difficult and costly. Now Northwestern University researchers have developed new devices based on a low-cost material to aid in the …

“Button pressing and solar energy power the retro gaming device A hand-held video game console allowing indefinite gameplay might be a parent’s worst nightmare. But this Game Boy is not just a toy. It’s a powerful proof-of-concept, developed …