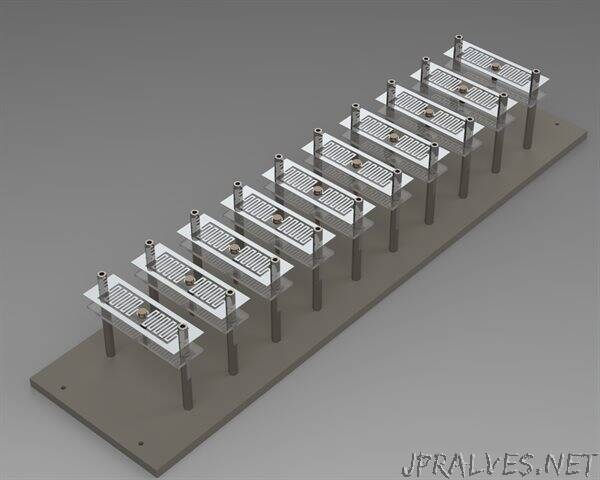 “Much of modern electronic and computing technology is based on one idea: Add chemical impurities, or defects, to semiconductors to change their ability to conduct electricity. These altered materials are then combined in different ways to produce the devices that form the basis for digital computing, transistors, and diodes. Indeed, some quantum information technologies are based on a similar principle: adding defects and specific atoms within materials can produce qubits, the fundamental information storage units of quantum computing.

Gaurav Bahl, professor of mechanical science and engineering at the University of Illinois Urbana-Champaign and member of the Illinois Quantum Information Sciences and Technology Center (IQUIST), is exploring how special non-linear properties in engineered materials can achieve similar functionalities without the need to add intentional defects.

As his research group reports in their article “Self-Induced Dirac Boundary State and Digitization in a Nonlinear Resonator Chain,” published in Physical Review Letters, a metamaterial can change its functionality on its own depending on the power level of the input.

A metamaterial is an artificial system that replicates the behavior of real materials made of natural atoms. The researchers constructed just such a material whose behavior is analogous to a special kind of semiconductor called a Dirac material. It consisted of a chain of magnetic-mechanical resonators, where the magnetic interactions acted like bonds between atoms in a one-dimensional crystal. When any of these “atoms” was mechanically excited, that is, was made to move periodically, the excitation spread to the rest of the crystal, just like electrons injected into a semiconductor.

After demonstrating that a completely uniform Dirac metamaterial does not allow mechanical excitations to pass through (just like electrons are forbidden from flowing through insulating semiconductors), the researchers introduced a specific set of nonlinearities into the system. This new property added sensitivity to the level of the mechanical excitation and could subtly change the resonance energy of the magneto-mechanical atoms. With the right choice of nonlinearity, the researchers observed a sharp transition from insulating to conducting behavior, depending on how strong an input was provided.

This intriguing behavior resulted from the spontaneous appearance of a new boundary where the effective mass of the mechanical excitation, an invisible internal property of Dirac materials, underwent a change of sign depending on the level of the excitation. The researchers were surprised to find that this boundary was accompanied by a new state that “popped in” at the boundary and allowed input energy to transmit through the material. This effect was very similar to how a defect atom acts within a semiconductor.

“In photonics and electronics,” Bahl said, “nonlinear properties like this could be engineered to form the foundation of new computational systems that don’t rely on the conventional semiconductor approach.”

Whenever we add defect states and special atoms, we interrupt the uniformity of the material, which can lead to other undesirable effects. However, materials in which a defect state can be formed on demand through an invisible property, such as the Dirac mass used in this work, have profound implications for quantum information systems where they promise qubits that can be produced dynamically where they are needed. The next challenge is finding or synthesizing real materials based on natural atoms that can replicate this effect.