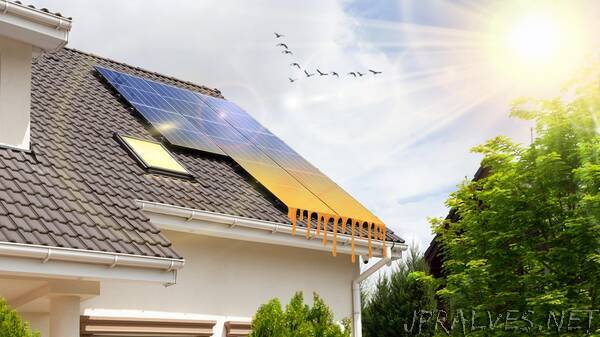 “Scientists at EPFL have found a way to improve the operational stability of perovskite solar cells, a crucial step towards their commercialization.

Hybrid perovskites are materials made from metal halide frameworks interspersed with organic cations. They have attracted a lot of interest in the field of solar energy because of their light-harvesting capacity combined with a low cost of manufacturing, making perovskite solar cells (PSCs) prime candidates for replacing current silicon-based devices. Perovskites also show great potential in a range of applications that include LED lights, lasers, and photodetectors.

One of the obstacles on the way to commercializing perovskite solar cells is their operational stability, which puts them at a disadvantage compared to photovoltaic technologies already on the market. This is especially a problem with mixed-halide perovskites, which are ideal materials for tandem solar cells and emission-tunable LEDs because they combine high compositional flexibility with optoelectronic performance.

Mixed-halide perovskites also feature wide bandgaps, a property that affects the energy needed for a photovoltaic material to generate electricity. But in most mixed-halide perovskites, light can cause a phenomenon called “halide phase segregation”, where the ingredients “de-mix” into regions of differing halide content. This segregation can lead to significant efficiency problems during the operational lifespan of a solar cell. Solving it is, therefore, critical for the success of perovskite technology, especially for solar cells with a so-called tandem configuration, where mixed-halide, wide bandgap perovskites are commonly employed in combination with a second low bandgap perovskite or a silicon cell.

A team of researchers at EPFL’s School of Basic Sciences have now developed a method that improves both, power conversion efficiency and stability, of solar cells based on pure iodide as well as mixed-halide perovskites, while also suppressing halide phase segregation in the latter. The research was carried out by the groups of Professors Michael Grätzel and Ursula Rothlisberger at EPFL and led by Dr Essa A. Alharbi and Dr Lukas Pfeifer.

The method treats PSCs with two alkylammonium halide modulators that work synergistically to improve solar cell performance. The modulators were used as passivators, compounds used to mitigate defects in perovskites, which are otherwise promoting the aforementioned degradation pathways.

In this study, the researchers were able to use the two modulators to stop halide segregation and thereby substantially reduce the drops in power-conversion efficiency seen in long-term use of PSCs.

The new approach resulted in power-conversion efficiencies of 24.9% for one perovskite composition (α-FAPbI3) and 21.2% for the other (FA65MA35Pb(I65Br35)3). About 90% and 80% of the initial efficiencies were retained after 1200 and 250 hours of continuous operation, respectively. The authors write: “By addressing the critical issue of stability, our results represent an important step towards large scale practical applications of PSCs.””