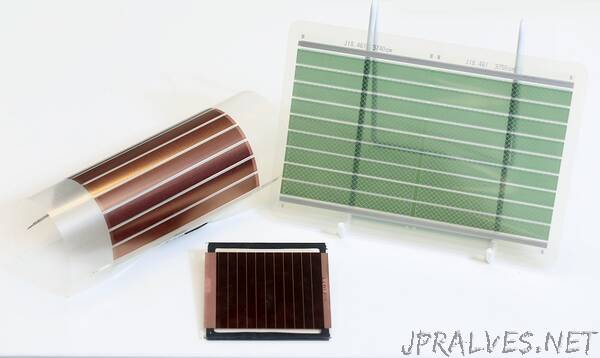 “Organic photovoltaics (OPVs) are a promising, economical, next-generation solar cell technology for scalable clean energy and wearable electronics. But the energy conversion loss due to the recombination of photogenerated charge carriers in OPVs has hindered further enhancement of their power conversion efficiency (PCE). Recently, researchers from City University of Hong Kong (CityU) overcame this obstacle by inventing a novel device-engineering strategy to successfully suppress the energy conversion loss, resulting in record-breaking efficiency.

The best-performing OPVs developed by the CityU team have achieved PCE of over 19%, and the team expects to exceed 20% very soon. The discovery is promising for the commercialisation of OPVs.

OPVs, a solar cell technology based on organic semiconductors, are regarded as a promising candidate for clean energy because of their low material toxicity and vast molecular tunability in photoactive materials. Currently, most high-performance organic photovoltaics adopt a “bulk-heterojunction” (BHJ) structure, consisting of electron donor and acceptor materials intermixed throughout the active layer of the device (see figure 1).

When converting sunlight into electricity in OPVs, energy from sunlight creates excitons (a negatively charged electron and a positively charged hole bound together), which then dissociate into free electrons and holes at the nanoscale donor-acceptor interface, generating charge carriers (photocurrent) and hence electricity.

However, if these charge carriers are not collected by the electrodes and encounter each other again at the donor-acceptor interface, they may recombine to form a so-called low-energy “spin-triplet exciton” (T1), which consecutively relaxes back to ground state, causing energy loss in the form of heat and hence photocurrent loss. This irreversible process strongly limits the maximum achievable PCE of OPVs.

A research team led by Professor Alex Jen Kwan-yue, Lee Shau Kee Chair Professor of Materials Science and Director of the Hong Kong Institute for Clean Energy at CityU, overcame this obstacle by inventing a novel device-engineering strategy to suppress T1 formation and minimise the associated recombination loss, which led to the record-breaking efficiency of OPVs.

“We are the first team that managed to modulate T1 formation through device engineering without changing the properties of the photoactive materials and to reveal the fundamental mechanism,” said Professor Jen. “Using this strategy, we have expanded it to 14 other material systems to show the universal applicability of this study.” Their findings were published in the scientific journal Nature Energy, under the title “Suppressed Recombination Loss in Organic Photovoltaics Adopting a Planar-mixed Heterojunction Architecture.”

By replacing the traditional highly intermixed bulk-heterojunction (BHJ) architecture inside the solar cell with a rather de-mixed “planar-mixed heterojunction” (PMHJ) to reduce the donor-acceptor interface inside the active layer of OPVs, the team managed to alleviate the energy conversion loss in OPVs by suppressing the recombination of the charge carriers. This discovery maximized the photocurrent of OPVs, resulting in devices with a high PCE of over 19%.

“The achieved optimum photovoltage-photocurrent trade-off resulting from our strategy enables OPVs with competitive efficiency comparable to that of inorganic photovoltaics,” added Dr Francis Lin, postdoc in the Department of Chemistry, who also took part in the study. He explained that organic photovoltaic cells have several advantages over inorganic counterparts, such as being lightweight and flexible, like a thin plastic film, and allowing cost-effective fabrication, using roll-to-roll printing production.

The team believes that its latest discovery provides a comprehensive basis for future organic photovoltaics to reach their full promise and stimulate a new wave of studies on the versatile photophysical processes in organic semiconductors.

They are applying for a patent for the discovery. “We hope to further boost the performance of OPVs following our novel discovery of modulating the photophysical processes. This redefines the maximum potential of OPVs to facilitate their commercialisation,” said Professor Jen.

Professor Jen and Dr Lin, at CityU, and Professor Zhang Chunfeng, from Nanjing University, are the corresponding authors of the paper. The first authors include Mr Jiang Kui, PhD student in the Department of Chemistry at CityU, who was involved in the research when he was a research assistant in Professor Jen’s group.

The research was supported by various funding sources, including the Lee Shau-Kee Endowed Chair Professorship (Materials Science), CityU, the Innovation and Technology Commission of Hong Kong, the Research Grants Council of Hong Kong, the Guangdong Major Project of Basic and Applied Basic Research, and the Guangdong-Hong Kong-Macao Joint Laboratory of Optoelectronic and Magnetic Functional Materials.”