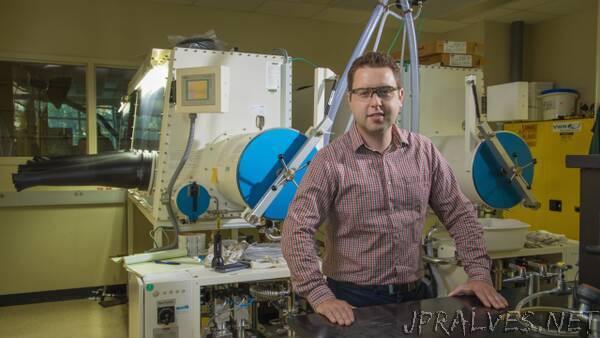 “Creating new synthetic compounds is often a complex and multi-step process that can take years of research. Caleb D. Martin, Ph.D., associate professor in the Department of Chemistry and Biochemistry at Baylor University and principal investigator of the Martin Research Group, and his team have developed a new compound known as tris(ortho-carboranyl)borane or BoCb3. Synthesized in one step, this state-of-art Lewis superacid – that has applications in the production of most common plastics – is more efficient to produce, safer for the environment and could potentially save billions of dollars in manufacturing costs.

Martin published the results in the Sept. 22, 2023, issue of the journal Angewandte Chemie International Edition (GDCh).

When Martin joined Baylor, he was left with some chemicals from the lab of the late Baylor chemist F. Gordon A. Stone, who held the position of Robert A. Welch Distinguished Professor of Chemistry, after Stone retired. Among these chemicals left by Stone was ortho-carborane, one of the chemicals used by the Martin’s team to make BoCb3. Stone was one of the world’s 100 most-referenced chemists at the pinnacle of his career. In 1963, Stone developed a strong Lewis acid known as B(C6F5)3 that is still used today in the production of polyolefins, which had a global market share of $295 billion in 2021. Without having inherited the chemical, Martin said his group would have never tried this outside-of-the-box idea to make the unique Lewis acid.

“My research is synthetic inorganic and organic chemistry where we target molecules that can benefit society or where the results are useful to other researchers in advancing their research,” Martin said.

Could Martin improve on the Lewis acid that Stone developed ~60 years ago? Although it has been attempted before, no one has significantly improved on the process.

Lewis acids are an essential part in the production of polyolefins. Known as the activator, mixing a Lewis acid with a zirconium or hafnium compound causes it to be active for the polymerization of an olefin (carbon-carbon double bond) to polyolens, which can be found in a variety of products, including plastic bags and coating for cables, steel pipes and automotive parts, just to name a few.

Other approaches to making strong Lewis acids have been through several time-consuming intermediate steps to get to the final product and require environmentally harmful fluorine atoms that never degrade in nature.

Their route to make BoCb3 uses a simple one-step process and only three commercially available chemicals, “like making a one-pot meal,” Martin said. Combining them, the result is a powerful Lewis acid that is easier to make, produces less waste and is less harmful to the environment as it is halogen free, lacking fluorine or chlorine.

“We make new compounds all the time,” Martin said. “However, it’s rare to come up with a unique, useful compound from just three things that you can order from a catalogue.”

BoCb3 is now in the fundamental discovery stage. A provisional patent has been filed and their team is working extensively with three academic research groups in California, Germany and Italy to understand the full extent of its reactivity and potential commercial applications.

“Although it is too soon to know the full impact BoCb3 will have, it’s very easy to envision this technology will be really attractive to the petroleum industry,” Martin said.”