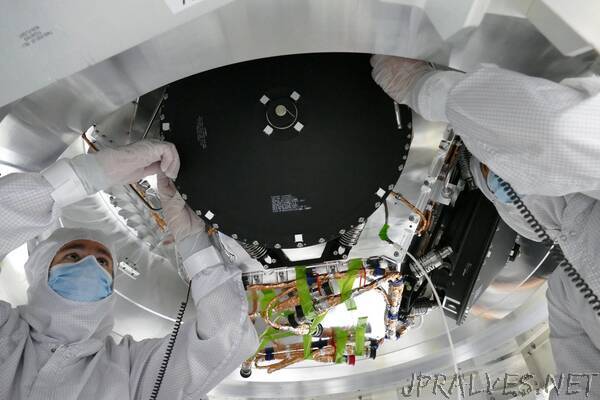 “The enormous spacecraft that will head to Jupiter’s moon Europa uses four large reaction wheels to help keep it oriented.

Just as NASA’s Mars rovers rely on robust wheels to roam the Red Planet and conduct science, some orbiters rely on wheels, too – in this case, reaction wheels – to stay pointed in the right direction. Engineers and technicians at NASA’s Jet Propulsion Laboratory in Southern California recently installed four reaction wheels on Europa Clipper, which will rely on them during its journey at Jupiter’s icy moon Europa.

When NASA’s spacecraft heads through deep space, slips into orbit around Jupiter, and collects science observations while flying dozens of times by Europa, the wheels rotate the orbiter so that its antennas can communicate with Earth and its science instruments, including cameras, can stay oriented.

Two feet wide and made of steel, aluminum, and titanium, the wheels spin rapidly to create torque that causes the orbiter to rotate in the opposite direction. Isaac Newton’s third law of motion also applies in deep space and explains the underlying phenomenon: For every action, there is an equal and opposite reaction. The reaction wheels cause the spacecraft to react to the spinning action of the wheels.

Without those reaction wheels, Europa Clipper wouldn’t be able to do its science investigations when it arrives at the Jupiter system in 2030 after its 2024 launch. Scientists believe Europa harbors a vast internal ocean that may have conditions suitable for supporting life. The spacecraft will gather data on the moon’s atmosphere, surface, and interior – information that will help scientists learn more about the ocean, the ice crust, and potential plumes that may be venting subsurface water into space.

During its orbits around Jupiter, Europa Clipper will rely on reaction wheels to help it perform thousands of turns, or “slews.” Although the spacecraft could perform some of those maneuvers with thrusters, its thrusters need fuel – a finite resource aboard the orbiter. The reaction wheels will run on electricity provided by the spacecraft’s vast solar arrays.

The trade-off is that the reaction wheels work slowly. Europa Clipper’s reaction wheels will take about 90 minutes to rotate the craft 180 degrees – a movement so gradual that, from a distance, it would be imperceptible to the human eye. The rotation of the spacecraft will be three times slower than the minute hand on a clock.

Also, they can wear out over time. It happened on NASA’s Dawn spacecraft, requiring engineers to figure out how to rotate using thrusters with the available fuel. To address this, engineers have installed four wheels on Europa Clipper even though only three are needed to maneuver. They alternate which three wheels are in operation to even the wear. That leaves them with a “spare” wheel if one of the others fails.

Installing the wheels was one of the most recent steps of the phase known as assembly, test, and launch operations. Science instruments continue to arrive at JPL to be added to the spacecraft. Next, a variety of tests will be conducted, as the spacecraft moves toward its October 2024 launch period. After traveling over 1.8 billion miles (2.9 billion kilometers), Europa Clipper will be set to begin unlocking the secrets of this icy world.”